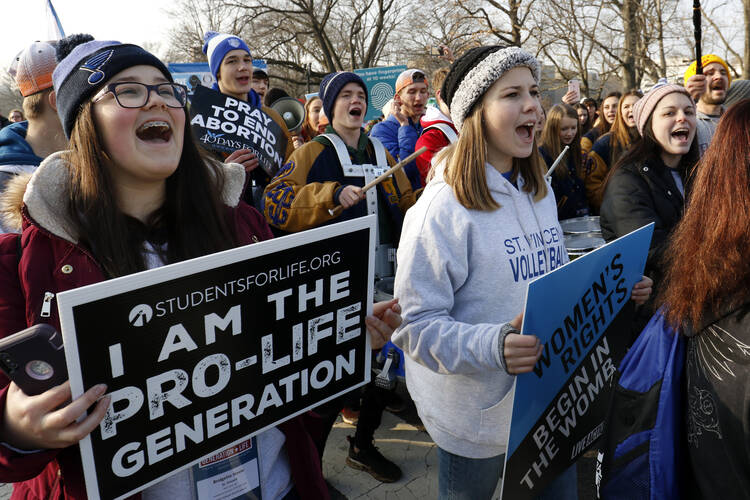 NEW HAVEN, Conn. (CNS) -- Americans have shifted toward a pro-life stance in recent weeks during a period when some states are considering legislation that would legalize abortion up until birth, according to a new poll.

The Marist Poll at Marist College conducted in mid-February found that equal numbers of Americans -- 47 percent -- identified themselves as pro-life and as those who support abortion.

The findings reflect a dramatic shift from a similar poll in early January that found respondents supporting abortion by 55 percent to 38 percent.

"Current proposals that promote late-term abortion have reset the landscape and language on abortion in a pronounced, and very measurable, way," Barbara Carvalho, poll director, said in media release from the Knight of Columbus, the poll sponsor.

The largest swing in responses came from self-identified Democrats and people younger than 45, poll officials said.

The poll reported that among Democrats, the gap between people who identify as pro-life and those who support abortion was cut in half from 55 percent to 27 percent. The number of Democrats who identify as pro-life stood at 34 percent, up from 20 percent in January. Similarly the number of Democrats who said they support abortion fell to 61 percent from 75 percent.

Young respondents in February were almost evenly divided with 47 percent identifying as pro-life and 48 percent as supporting abortion. The figures represent a dramatic shift from January's poll in which 28 percent of young people said they were pro-life and 65 percent supported abortion.

The poll also found overwhelming opposition to later-term abortions. By a nearly three-to-one margin -- 71 percent to 25 percent -- respondents said abortion generally should be illegal during the third trimester of pregnancy.

Carvalho attributed the wide swing to legislative attempts to allow later-term abortions. "In just one month, there has been a significant increase in the number of Americans who see themselves as pro-life and an equally notable decline in those who describe themselves as pro-choice," she said in the media release.

The poll also found overwhelming opposition to later-term abortions. By a nearly three-to-one margin -- 71 percent to 25 percent -- respondents said abortion generally should be illegal during the third trimester of pregnancy.

Further, 80 percent of respondents would like to see abortion limited to the first three months of pregnancy at most. The number represents a 5-percentage point increase since January.

A breakdown of that figure shows includes 65 percent of respondents who support abortion, 64 percent of Democrats, 92 percent of Republicans and 83 percent of political independents.

"Arguments in favor of late-term abortion are simply not convincing the American people," Carl Anderson, CEO of the Knights of Columbus, said in the media release. "If anything, since these proposals have been unveiled, people are moving noticeably in the pro-life direction. It is now clear these radical policies are being pursued despite opposition of the majority of Americans of both parties."

And all this proves is that the Knights of Columbus are lying even more than in January to try to convince the world something has changed but alas, lies are just that, lies!

Again, there exists on planet earth no polls which agree with this poll's numbers in any way, or form, or any that agreed with their January poll. If the truth is not what you want it to be just lie to everybody. That is the Knights of Columbus way.

It is too bad really, we need lay people who genuinely care about working to end the desire for abortion but these are not those people. Lies help no one. There does exist enormous global evidence that criminalizing and hindering abortion through any laws only promotes its occurrence everywhere in the world while also increasing maternal death rates. So some lies are really very dangerous both to the unborn and born alike. Not surprising this intentional misinformation comes from extremely sexist men who desperately want other laity to think they are important.

Like our current clergy, many men can only feel important while they are hurting women and children.

Sorry it took me so long to get back. I did not realize anyone had responded to me.

Virtually nothing that you stated refuted what I stated in my comment. Not even the gallop poll you brought up supports the figures in the Knights polls and gallop has been rated as the least accurate among reasonably sourced or mostly unbiased sources.

The Knights of Columbus claim to be a charity but spend most of their, corruptly procured through questionable insurance transactions, funds attacking women's rights to both abortion and birth control access. They are so sexist that they don't even allow good Catholic women to be knights. They are pushing an obvious agenda and as I said there are no reasonably sourced polls which support the numbers they state about Americans or democrats regarding wanting greater restrictions on abortion.

I don't believe that partial birth abortion which has been made illegal in the U.S. was even brought up in the Knights poll. Abortions which happen in the third trimester are generally done, currently (anything before the year 2005 I am not going to refer to because it is the past so not constructive since those abortion rates have dramatically changed from today's.) When the woman's life is in danger or if the fetus will be severely sick in some way. This is why all your vague and mostly non-sourced statements and research whose drs. and credentials are unreported by you are from before the year 2000.

Now even if the Knights poll was not a the total falsehood it is, it would not matter. Because popularity of bad laws does not result in good ends. The facts - based on all reasonably sourced research how us continually that all countries that restrict abortion have more abortions or higher states of abortion and much higher maternal death rates. This is especially true in countries that restrict in any way free access to birth control. In fact after obamacare made access even easier for women to gain more reliable birth control, the abortion rates dropped to the lowest they have ever been. We currently have one the lowest rates of abortion around the globe. The world health organization has told us this is also true of western and northern Europe because they too have easier access to birth control and abortion. So be happy to lose the battle Tim. Your loss is saving lives of both the born and unborn alike.

You need to realize that one poll which also does not support the knights numbers does not constitute any real form of evidence since polls can be way off so you need non religious or unbiased polls which agree with the gallop you used and you do not have that.

Many other polls disagree enormously with the figures. Also much is dependant on how the poll asks a question. Stating 50 percent of women in any category of trimester give an answer that they want an abortion for no reason in particular is false. You may feel free to contact planned parenthood and ask for that research.

The problem with you statement is that none of your research has been supported by any known legitimate source. It is your job to supply that info. If you want to be taken seriously.

I did not in either of my past comments state as my main point that what the polls say really matters anyway because the world health info I gave you is based on strong and real global research and evidence so the polls which are erroneous are not what matters. Evidence and fact outweigh opinion polls right or wrong, especially, when facts tell you that making laws will definitely increase abortion and maternal death rates. Tim we have one of the lowest rates in the world. That is not really disputable so that is a good thing. Why do you wish to make laws that will only increase our country's abortion rates? How is that pro life?

Not liking evidence does not change that evidence and make it not reality.