The legacy of Abraham Joshua Heschel 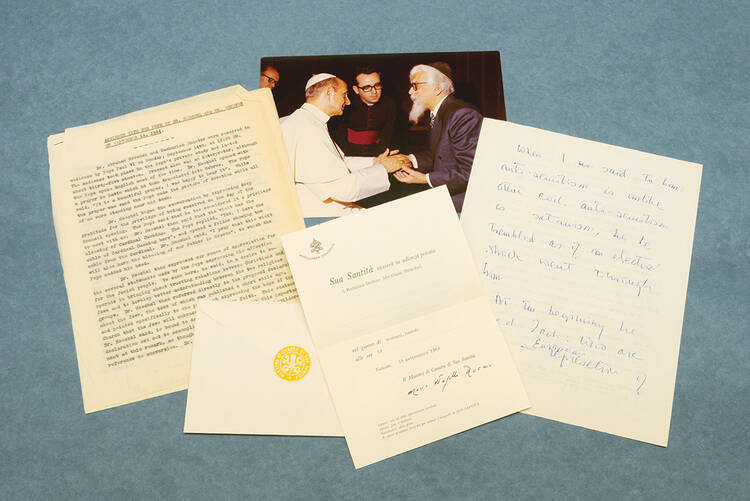 The Catholic Church is celebrating this year the 50th anniversary of the Second Vatican Council’s “Declaration on the Relationship of the Church to Non-Christian Religions” (“Nostra Aetate”). The document was approved on Oct. 28, 1965, after intense debate and some strong opposition. It is one of those texts in which the self-understanding of Catholic identity does not sound as a monologue but a dialogue. The category of “otherness” plays a decisive role.

At the very beginning, the declaration says that the Catholic Church acknowledges with sincere reverence (sincera cum observantia) and rejects nothing that is true and holy in the other religions. The declaration was initially prepared with the intent of healing relations with the Jewish people. The approval of this document occurred just 20 years after the end of World War II and the Holocaust. Out of the smoke of the Shoah, in the spirit of repentance and commitment, Christians have understood that their relation with the Jewish people cannot be seen as an option or a transient historical element, an embellishment for the Christian identity. After the Holocaust a process began in which Christian and Catholic identity could not be understood anymore without Jewish identity. At the council, the awareness that “the other” is rooted in the core of one’s own identity came to its fulfillment.

The two key figures that inspired the preparation of “Nostra Aetate” were Cardinal Augustin Bea, the Jesuit who was head of the Secretariat for Christian Unity, and Rabbi Abraham Joshua Heschel, theological consultant of the American Jewish Committee. Between them a sincere friendship began, which helped to work out the declaration, though not without difficulties. From the very beginning, Rabbi Heschel worked hard to remove from the teaching of the Catholic Church any anti-Semitic words and any reference to a mission of the church for the conversion of the Jews. In May 1962 he presented a memorandum in which he asked the council fathers to eliminate once and for all any accusation of deicide on the part of the Jewish people, to acknowledge the integrity and the perpetuity of the election of Jews in the history of salvation and, lastly, to give up proselytizing Jews. The American Jewish Committee presented three memoranda; in the last of these his influence was essential. He wanted the council fathers to know that a Jew has a dignity as a Jew and not as a possible convert to Christianity. He repeated quite often: “If I were asked either to convert or to die in Auschwitz, I’d rather go to Auschwitz.”

During the years of the council, Rabbi Heschel met Pope Paul VI and asked him to support Jewish requests against the accusation of deicide and against the mission to the Jews. Unfortunately these requests were not all accepted in the final Vatican document. The council’s decree asserted that the death of Jesus was not to be blamed on all Jews collectively, eliminated the word deicide and condemned any form of anti-Semitism. The Catholic Church acknowledged the abiding validity of God’s covenant with Israel. The council fostered and recommended mutual knowledge and respect between Jews and Christians. The church should not preach and teach anything that could give rise to hatred or contempt of Jews in the hearts of Christians. Pope Paul VI promulgated the text immediately as official church doctrine. A solid foundation was established for future decades of Jewish-Christian dialogue and cooperation. Even if the declaration was a document of compromise, it represents a leap forward on the path to respectful mutual relations between Christians and Jews.

Pope Paul VI was so moved by the figure of Rabbi Heschel that he encouraged the publication of his works in Italy. Abraham Heschel died on Dec. 23, 1972, in New York. During the general audience held in the Vatican on Jan. 31, 1973, Paul VI quoted from one of his books, God in Search of Man: “Before man searches for God, it is God who is in search of us.” It was unusual for a non-Christian source to be quoted in an official discourse of a pope.

Abraham Heschel’s contribution to Jewish-Christian dialogue has been of utmost importance and has made it possible for many Christians to rediscover the Jewish roots of their faith, which lie not only in the Old Testament but in Judaism as well. He urged Christians to be faithful to their roots and not to worry about converting Jews, leaving behind once and for all the scandal of the past centuries: “I recognize in you the presence of holiness. I see it; I perceive it; I hear it. You do not embarrass us; we want you not to be embarrassed by what we are.”

Rabbi Heschel’s vision for the Jewish-Christian dialogue was fulfilled in the speech Cardinal Walter Kasper gave in Jerusalem in November 2001, when the former president of the Pontifical Council for Christian Unity and the Commission for Religious Relations With the Jews made his own, on behalf of the Catholic Church, Rabbi Heschel’s expectation: “The term mission properly refers to the conversion from idols to the one true God, to the God who revealed himself in the history of salvation of his chosen people...; therefore, one cannot speak of the mission to the Jews, because they already believe in the one true God. Therefore, there is no dialogue and there is no ‘Catholic mission’ towards the Jews.”

His remarks on interreligious dialogue moved forward the legacy of the council documentand reached itsclimax during the visit of Pope John Paul II to the synagogue in Rome in 1986. The pope recalled the spiritual bond between Christians and Jews. “The Jewish religion is not ‘extrinsic’ to us, but in a certain way is ‘intrinsic’ to our own religion. With Judaism therefore we have a relationship which we do not have with any other religion. You are our dearly beloved brothers and, in a certain way, it could be said that you are our elder brothers.” Rabbi Heschel has been for many Christians such an elder brother.

A later document (1994) of the Pontifical Council for Interreligious Dialogue, “Dialogue and Proclamation,” moved further ahead the legacy of the conciliar declaration by saying that “Christians must be prepared to learn and to receive from and through others the positive values of their traditions. Through dialogue they may be moved to give up ingrained prejudices, to revise preconceived ideas, and even sometimes to allow the understanding of their faith to be purified” (No. 49). Religious humility mandates listening as a basic mode of being in an interreligious context. The golden rule of interreligious dialogue can be so formulated: Try always to understand the other, as you would like to be understood. By listening and being mutually respectful, each faith learns, as Paul Ricoeur says, “to be oneself as another” and participates in the mystery of God’s self-giving (pathos), which alone can mend the brokenness of our interfaith relations. “One does not live without the others,” wrote Michel De Certeau. In his first apostolic exhortation, “The Joy of the Gospel,” Pope Francis reminded us, in the spirit of Rabbi Heschel, that “we are pilgrims journeying alongside one another. This means that we must have sincere trust in our fellow pilgrims, putting aside all suspicion or mistrust, and turn our gaze to what we are all seeking: the radiant peace of God’s face” (No. 244).

Paolo Gamberini, S.J., is an associate professor of at the University of San Francisco. He has previously published work on Abraham Joshua Heschel.

Show Comments (
2
)
Comments are automatically closed two weeks after an article's initial publication. See our comments policy for more.
Beth Cioffoletti
6 years 8 months ago
Interesting (and nourishing) article, Fr. Gamberini. I have been captivated by the insights of Abraham Joshua Heschel since first seeing the quote about "just being is holy" on a Fellowship of Reconciliation card in the early 1970s. I find myself wondering if this insight into interfaith dialogue is this new? Has it really taken the Catholic Church until the 2nd Vatican Council to come to this insight? Were there no mystics to break the myth of "we hold the only truth" with regards to other faiths?
Frank Merritt
6 years 8 months ago
I'm very appreciative of this article. I find myself always questioning the hotwired use of the term anti-Semitic; which, in my understanding, became a political term that was then used to describe a situation that came to the fore in European political consciousness in the 19th century. To me, to illustrate my point, bigotry toward current refugees fleeing Syria is anti-Semitic, similarly the hatred of Palestinians is, also, anti-Semitic. Let's be more equanimous in our assessments of something if something is anti-Christian, anti-Jewish, anti-Muslim or anti-Semitic. All of these are real and chilling and, after the grave sufferings of the peoples involved, they ought not be distorted for narrow political purposes.