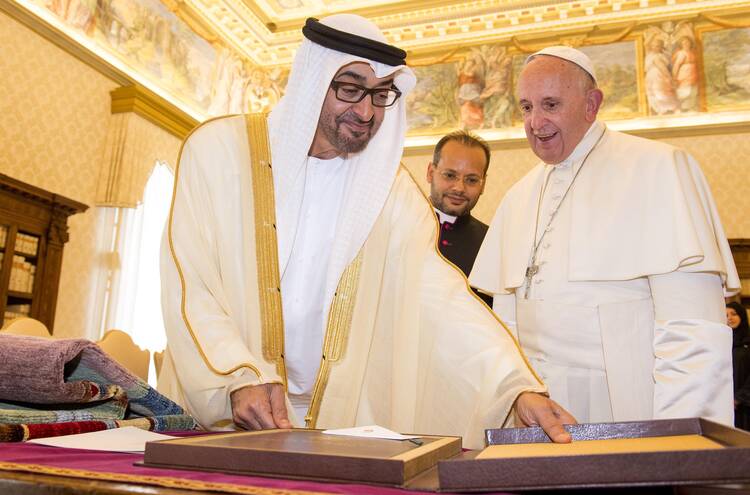 Pope Francis will visit Abu Dhabi, the capital of the United Arab Emirates, from Feb. 3 to 5, to participate in an international interfaith meeting on “Human Fraternity,” the Vatican announced today.

In a surprise announcement, Greg Burke, the director of the Holy See’s press office, said Pope Francis is going at the invitation of Sheikh Mohammed bin Zayed al-Nahyan, the crown prince of Abu Dhabi. The crown prince visited the pope at the Vatican in September 2016 and assured him that he was working for peace alongside Francis.

Mr. Burke said the pope’s visit to the U.A.E., like his 2017 visit to Egypt, “shows the fundamental importance the Holy Father gives to interreligious dialogue.” It “is a perfect example of the culture of encounter,” he said.

Francis is the first pope to visit the oil-rich United Arab Emirates, a majority-Muslim country of 10 million people located at the southeast end of the Arabian Peninsula on the Persian Gulf. Only 1.5 million of the population are Emirati citizens; the rest are expatriates. Christians, most of them migrants, make up 13 percent of the country’s population. They come from almost all the major Christian denominations and include 900,000 Catholics.

The theme of the visit is “Make me a channel of your peace,” words that are taken from the prayer of St. Francis Assisi.

Christians can worship freely in some 40 churches, many of which have been built on land given by the Emirate rulers, who promote religious tolerance. According to Bishop Paul Hinder, O.F.M.Cap., the vicar apostolic of Southern Arabia, support for the Christian community in the country comes straight from the top.

The U.A.E., one of the most important economic centers in the Middle East and a regional trading and tourism hub, borders Oman to the east and Saudi Arabia to the south and shares maritime borders with Qatar to the east and Iran to the north. The U.A.E. is an absolute monarchy made up of a federation of seven emirates. Abu Dhabi comprises three-quarters of the federation’s total land area and is the center of its rich oil industry, home to hundreds of multinational corporations and marked by its many skyscrapers. Each emirate is governed by a ruler, and the seven rulers together form the Federal Supreme Council, which elects the prime minister, and one of them serves as the country’s president.

Who will give Asia Bibi asylum? A blasphemy case in Pakistan puts Britain in a difficult spot
David Stewart

Since becoming pope, Francis has reached out to Muslims across the world, as he did to the Muslim community in Buenos Aires when he was archbishop there, conscious of the vital importance of good relations between the followers of all religions, especially Christians and Muslims, for promoting peace and harmony in the world. He has already visited several majority-Muslim countries, including Bosnia-Hercegovina, Bangladesh, Egypt, Jordan, Palestine and Turkey, seeking to promote peace between Christians and Muslims. He will visit Morocco, another Muslim country, in March.

The Vatican said the theme of the visit is “make me a channel of your peace,” words taken from the prayer of St. Francis Assisi. On his election as pope, the archbishop of Buenos Aires took his name from St. Francis, who, the Vatican said today, “has been a shining example of putting into practice the words of Jesus Christ, ‘Blessed are the peacemakers, they shall be called children of God’” (Mt 5:9). Moreover, it said, “the peace of God heals all forms of hostility within the human person and accompanies the good news proclaimed by Jesus Christ of a God who reconciles the world to himself.”

The Vatican revealed that the official logo of the visit is “a dove bearing an olive branch.” The colors of the dove, white outlined in yellow, are taken from the colors of the Vatican flag, while the red, green, white and black of the U.A.E. flag are incorporated into the body of the dove, “symbolizing the visit of the pope to the country as a herald of peace.”

doesn't the Pope have enough on his plate preparing for his Summit on sex abuse with the world's bishops in February?--or maybe he is not taking that seriously enough, so he is taking a jaunt to UAE?
and how does that Muslim country treat its women? better than the Vatican I hope!

“Human Fraternity” - is a fine initiative.

Well, despite all the negative thoughts about this matter, I still hope that he keep on reaching out to our Muslim brothers. concrete contractors columbia sc