Asia Bibi, in hiding after blasphemy acquittal, is banned from leaving Pakistan 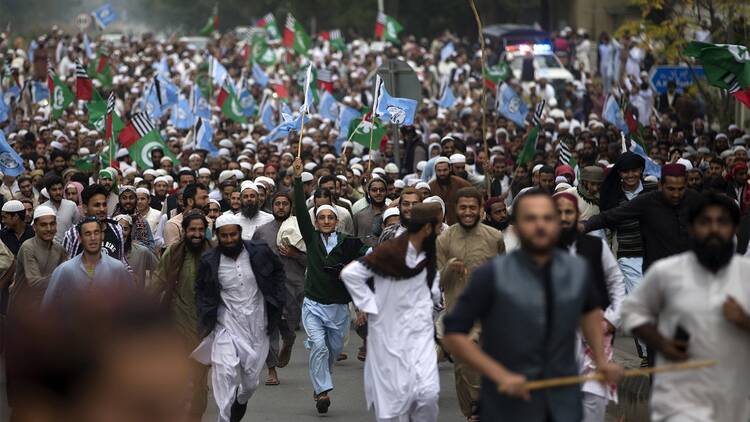 Pakistani religious groups protest against a Supreme Court decision that acquitted Asia Bibi, who was accused of blasphemy, in Islamabad, Pakistan, on Nov. 2, 2018. (AP Photo/B.K. Bangash)

LAHORE, Pakistan (RNS) — It has been a month since Asia Bibi was acquitted of blasphemy, but her ordeal is far from over.

A Christian woman who spent nine years in prison for allegedly insulting the Prophet Muhammad under Pakistan’s draconian blasphemy law, which carries the death penalty, Bibi is now in hiding in a government safe house along with her husband, Ashiq Masih.

“We’re afraid,” said Joseph Nadeem, who serves as the guardian of two of Bibi’s daughters while she lives in secret. “In recent days, the Islamists have fired at the gate of our home. We are constantly receiving threats and on more than one occasion we have been followed.”

Exoneration in a blasphemy case in Pakistan rarely means one can start afresh. Instead, those acquitted of the charges face persecution from religious groups that refuse to recognize the jurisdiction of the courts.

Often, they must leave the country.

But following countrywide protests by religious extremists after the Oct. 31 verdict, Prime Minister Imran Khan decided to prohibit Bibi from leaving Pakistan. Australian, Canadian and Dutch diplomats are reportedly negotiating with the Pakistani government for her release so she might travel to one of those countries for asylum.

British Prime Minister Theresa May came under fire for refusing to offer Bibi a safe haven. Asked about the issue recently in Parliament, May said she was working to help the woman.

“There is no truth in reports of her leaving the country,” he said. “It is fake news.”

British Prime Minister Theresa May came under fire for refusing to offer Bibi a safe haven. Asked about the issue recently in Parliament, May said she was working to help the woman.

“The absolute prime concern that we must have is the safety and security of Asia Bibi and her family,” said May.” And we want to see a swift resolution of the situation.”

Ashraf Asim Jalali, second from left, leader of Pakistan’s far-right Islamist political party Tehreek-e-Labbaik, addresses a news conference in Lahore, Pakistan, on Nov. 8, 2018, regarding the acquittal of Christian woman Asia Bibi. After nine years on death row in Pakistan on charges of blasphemy, Bibi was released, but her whereabouts in Islamabad remain a closely guarded secret in the wake of demands by radical Islamists that she be publicly executed. (AP Photo/K.M. Chaudary)

Persecution of Christians and other minorities in Pakistan is rampant, he added.

Last week, in a crackdown against the Tehreek-e-Labbaik — the group that organized the protests that erupted after Bibi’s acquittal — police arrested hundreds of its members, including the group’s leader, Khadim Hussain Rizvi. He is now in protective custody.

Government critics said the move was only for show, contending that Pakistani officials are allied with Rizvi and his followers.

Government critics said the move was only for show, contending that Pakistani officials are allied with Rizvi and his followers.

“The current government that stood on Rizvi’s side and used the blasphemy card against its opponents has little legitimacy to deal with these Islamists,” said Rubina Saigol, an independent political analyst based in Lahore. “Even if the civilian government has the will to take down these extremists, we know that the intelligence agencies of the country have long had an unholy alliance with these sectarian and religious outfits.”

Bibi’s daughter Eisham Ashiq, 18, is holding out hope that she and her parents can be reunited somewhere abroad soon. She recently appeared in a video thanking those who supported her mother.

“Thanks to everyone who prayed for my mother,” she said. “I would also like to thank the great judges and the Pakistani justice system that recognized my mother’s innocence.”

Meanwhile, others accused of blasphemy remain under threat in the country.

Sawan Masih, a Christian, was sentenced to death in March 2014 for allegedly blaspheming the Prophet. He said his Muslim accusers were trying to obtain his property. After he was accused in 2013, a mob attacked his home and churches in the Christian district of Lahore.

His family awaits justice and sees hope and fear in Bibi’s verdict.

“I am very happy that Asia is free and, someday, I hope my husband can also come home,” said Sobia Masih, his wife. “But when I see (how) the situation (developed) after her release, I fear for Sawan’s safety in prison.

“My daughters Romika and Noor miss their father,” she added. “They have been devoid of his love through no fault of ours.”