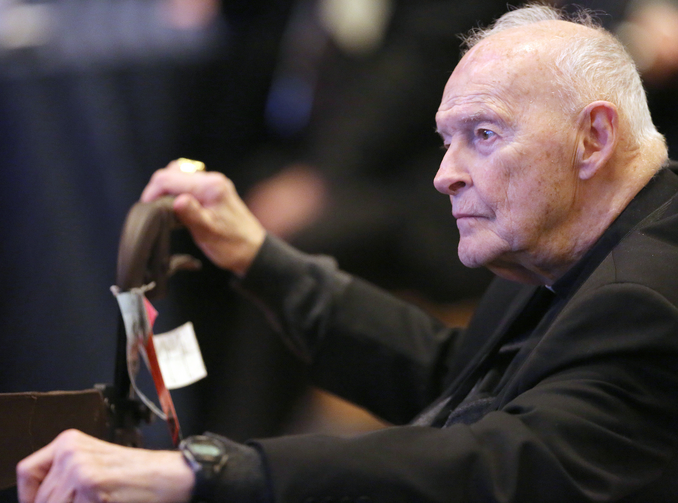 A new book by two Italian journalists, Andrea Tornielli of Vatican Insider and Gianni Valente of the Congregation for the Evangelization of Peoples, examines the history of reports of abuse by Archbishop McCarrick and confirms, via anonymous Vatican sources, that Archbishop McCarrick’s abuse was reported to the Vatican before he was named Archbishop of Washington, D.C. in 2000.

In this episode, we also discuss which countries might offer asylum to Asia Bibi, the Pakistani Christian woman whose death sentence for blasphemy was recently overturned, though she remains in prison out of fear for her safety.

Last, we talk about what the recent disappearance of four underground Chinese priests will mean for the recent deal between China and the Vatican and the ongoing relationship between them.

This would add more credence to the idea that 'saint' John Paul II wasn't bothered enough by the sexual abuse of young seminarians by McCarrick to do anything about it.
It also exposes Vigano's agenda against the Holy Father.
Maybe it is time for Vigano to be sent to Kansas to share accommodations with McCarrick.

A person with the heart of a lion like John Paul II does not coward away from defending the abused. That does not mean he could not have been misled. What appears more than evident is the existence of a decades-old, secret, homosexual organization that has protected and protects abusers. Justice demands thorough investigations on past and present sexual crimes that have been blocked at high levels in the Vatican.

Oh I see. The secret cabal of homo-hiders kept old JPII in the dark! Or maybe JPII was a homo-hider too...who cowered.
Either way, you seem to be looking for excuses and rationalizations.

Please stop the effort to put the blame of the sex abuse scandal on individuals with different sexual orientation. The abuse of minor children, whether boys or girls, is 'abhorrent behavior' irrespective of sexual orientation. The behavior and its cover-up has more to do with the hubris of clericalism that seeks to protect itself and the institutional structure that they established to empower themselves. The scandal resided throughout the whole Church and a conspiracy of a 'secret cabal' (borrowed from Frank T's comment) can't explain its wide reach. It was/is a grave problem in leadership! All bishops, including Popes, might do well to reflect on the Shakespearean's words of Cardinal Wolsey: Had I but served my God with half the zeal I served my king (substitute "ego"), he would not in mine age, have left me naked to mine enemies! And still the cover-ups continue.

All of us must work together and force the hands of our bishops to establish a more collaborate approach to leadership and transparency.

JPII was no coward, just ask the Communists, the abortion or homosexual lobby, the warmongers and war profiteers. According to female friends, he was a man's man and chaste: the complete opposite of a "homo-hider" and their associated deviations.

JPII did misjudge some sexual predators, that led to their promotions. Similar misjudgements have been made by Popes before and after him. You slander the now saint, but do you know what information got to him on every single accusation of sexual abuse? Are there no sexual abusers within the Vatican bureaucracy with an agenda of their own? If JPII was protecting them, why has sexual abuse not been solved 13 years after his death or at least seriously dented? What concrete actions are being taken today to stop the infestation?

If only homosexuality was to blame!!! We would have been out of the woods a long time ago. The Crisis was caused by Secrecy. Pure and simple. Why is this so difficult for people to really face? Any organization 100% dependent on donations for its existence would do everything in its power to keep Abuse secret. Healing is the only rational way forward. I believe deeply that once The Church devotes itself on every level to aid and abet the healing of victims and survivors, then, The Crisis as we know it will be over. Prevention of future abuse is crucial. But no one, as far as I know, has started talking yet about Healing for Survivors, and what that would even look like. If we count all Church-related personnel, including priests and nuns from Religious Orders, I think there could be close to a million victims in the United States in the last 60-70 years. Remember, less than 10% ever tell anyone. We have a huge opportunity here that I think is being missed so far... Healing through Healing. It works.

There was a consistent pattern in John Paul's malfeasance regarding clerical sexual abuse. Against advice he received from various persons in and out of Austria, he insisted on appointing Hans Groer, whose history of abusing seminarians was well known and widely reported, as Archbishop of Vienna and making him a cardinal. Similarly, John Paul honored Marcial Maciel as an "efficacious guide to youth" at a ceremony in Vatican Square even as Maciel's history as an abuser was well known. I can't read John Paul's heart or mind, but one things seems clear: he did not take advice or criticism well.