Running a marathon with a sprained ankle and a shaken faith 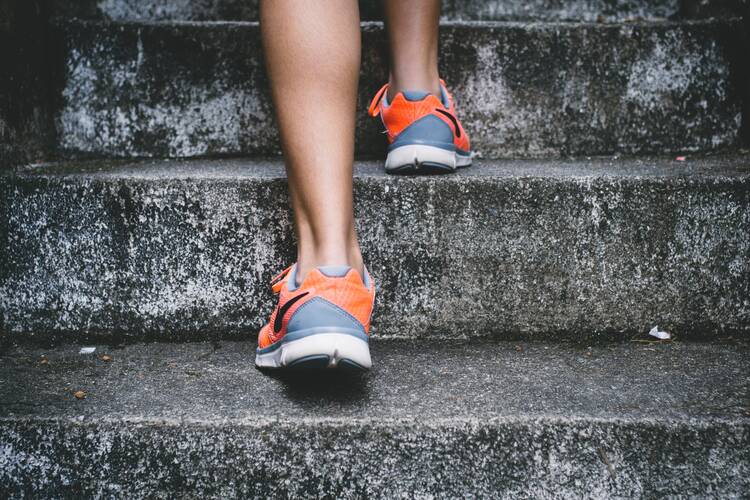 Photo by Bruno Nascimento on Unsplash

On a Monday afternoon in late January during my final semester at Boston College, I was sprawled across my bed writing a sonnet about Beyoncé for my poetry workshop, as one does. Still a bit dehydrated from my 17-mile run over the weekend, I eyed the water bottle on my desk across the room.

As I slid backward off my semi-lofted bed, the top of my foot caught the floor, and I fell into a heap, screamed and woke my napping roommate. My foot and ankle throbbed. My roommates surrounded me within seconds, bringing ice and asking if I was O.K.

I did not get off my floor for over an hour. I have tweaked my ankle plenty of times out on runs, but I knew this was different, worse. I cried—half because of the pain and half because I was supposed to run a marathon in five weeks.

Seriously, God. Seriously? I thought as I lay on the floor. Sure, it was an immature response to a stupid accident, but it had been a rough year. The marathon I planned to run in Myrtle Beach, S.C., was one of the few things I had been looking forward to. And now I didn’t know if that was going to happen.

Seriously, God. Seriously? I thought as I lay on the floor.

Eventually, I picked myself up off the floor, got into a minivan that said “Eagle Escort” on the side and met with a sports medicine doctor at university health services. I tried not to cry as she told me my ankle was likely sprained but that I should get an X-ray the next day to be sure nothing was broken.

“If my ankle is only sprained,” I asked, “how soon can I start running on it?”

I burst into tears. The marathon was less than five weeks away. I felt embarrassed, sure that the doctor saw me as dramatic at best and insane at worst. But I couldn’t stop crying. I silently cursed God.

The doctor was kind and assured me that I could still do other forms of exercise—swimming, biking, using the elliptical. Seeing I was clearly not consoled by this, she asked, “Are you training for something?”

I agreed race plan with a million ifs because—just like the rest of my life—I wanted to move forward, despite the uncertainty.

I nodded, dried my eyes and launched into the details: the date of the race (March 2), my longest run of training so far (17 miles), the longest run I had been planning before the race (20 miles on Feb. 10). I’m a planner, so it was all in my head. And that was what had me so ticked off at God. I had it all planned and now, this.

The doctor listened intently. She told me she worked a lot with athletes, including the women’s cross country and track teams, and that all hope was not lost. There was a possibility I could still run, if I iced frequently, cut back on running and cross-trained, stretched and strengthened my ankle. And if my ankle turned out not to be broken. To someone who craves certainty, this sounded like a lot of ifs.

One day I was sure I was on the mend; the next, the injury seemed worse than before.

A mental health crisis the previous year had left me fairly certain that, if God had a plan for me, I was not interested in pursuing it. I needed to make my own plans, watch my back and take care of myself. I blamed God because who else do you blame when it is no one’s fault? Not that this attitude stopped me from making all sorts of petty mental comments to God. Most were along the lines of After all I’ve been through, God, you’re really going to take my race away for getting out of bed to get water?

The coming days and weeks were messy: I got the X-ray and found out there was no break, even as my foot and ankle continued to swell. I iced my ankle, feeling anxious and bitter. I swam for two hours and then went on the elliptical for an hour one Saturday to try to get the cardio equivalent of a 20-mile run. I jumped rope to check if my ankle still hurt before attempting a run. It did, but I pretended it didn’t. I tried to go on a run; it hurt.

One day I was sure I was on the mend; the next, the injury seemed worse than before. I did not know what to do, and there was real stuff that needed planning. Should I cancel my flight? I still had to book a hotel, if I was going. My friend, Eryn, was planning to meet me in Myrtle Beach since it was spring break for both of us. I could not leave her hanging forever.

According to my iPhone, I took 74,556 steps that day, and those weren’t the only reasons to be grateful.

I decided I would book everything like I was running, and if I was still in too much pain, I would just try to enjoy the beach with my friend. Three days before the race, I went for a short run to see if my ankle hurt. This time it didn’t—really. I decided to try to run the race and drop out if my ankle hurt too much (another pesky if). The race would be a game-time decision, my least favorite kind.

The spirituality of the Sunday long run
Wyatt Massey

The morning of the race was chilly for South Carolina—low 40s, damp, windy. I stood in a crowd of huddled runners and realized that, due to my injury, in the last five weeks I had only run a total of 26 miles. I shook out my arms.

I looked over at the side where Eryn was standing. Even though the race started at 6 a.m., and I said I could get the shuttle bus from my hotel to start, she drove me to the starting line. I felt lucky to have such a good friend, to stand in the cold, to watch the sun peeping out on the horizon. Then I made a decision, one without any ifs: I would be grateful for every step today.

Around mile 10, I flexed my ankle. It didn’t hurt at all. I smiled. Eryn cheered me on as I ran past our hotel between mile 12 and mile 13. By mile 14, I was hurting. So I put in my headphones and told myself I was dancing, not running. Around mile 22, I was walking, achy everywhere. My eyes welled with tears, happy ones. I started running again. I crossed the finish with my arms raised victoriously. I stumbled around until I found Eryn, took my shoes off and lay down in the grass.

According to my iPhone, I took 74,556 steps that day, and those weren’t the only reasons to be grateful. I also had friendship, sticky fingers from a free Krispy Kreme donut (or three), an achy body and a happy mind. Thank God. It felt like an answered prayer, even though I hadn’t asked very nicely.

Emma Winters is a Joseph A. O’Hare Fellow for America.

Im in love with your content and also gain some knowledge from your blog.
https://appvalleyandroid.com
https://192-168-l-254-ip.com
https://psiphonapp.com