Pope Francis concludes synod by condemning ‘the continuous accusations to smear the church.’ 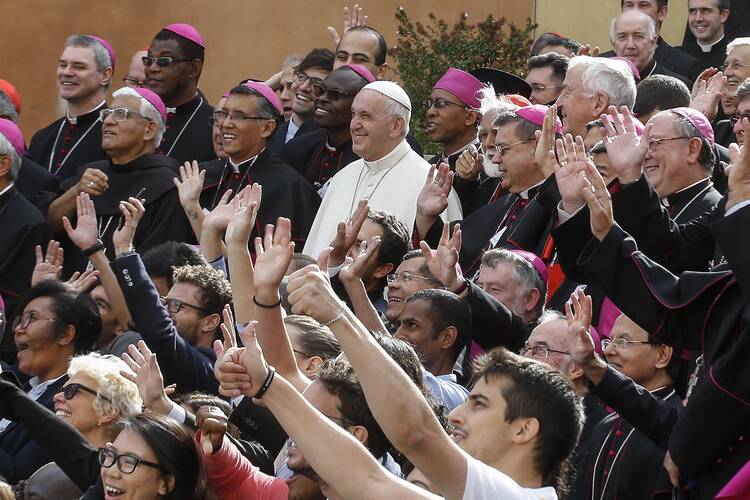 Pope Francis poses for a group photo with bishops and participants during the last day of the synod of bishops, at the Vatican, on Oct. 27. (Fabio Frustaci/ANSA via AP)

As he concluded the synod on young people, Pope Francis, speaking off the cuff, recalled the persecution of the Christians in the Middle East and in other places; he then went on to strongly condemn “another type of persecution, the continuous accusations to smear the church,” in what a senior Vatican official told America appeared to be a reference to the forces that are seeking to divide the church today and those using the abuse scandals to further other agendas.

Pope Francis told some 350 synod participants from over 130 countries that “the church is not dirty. Her children are, but not the mother. Our mother is holy, but we her children are sinners” and “because of our sins, the Great Accuser always takes advantage.”

Cardinal Lacroix: The synod on youth is for the whole church
Gerard O’Connell

Speaking with passion, he recalled, as he had in early September, that “the first chapter of the Book of Job tells us that he (the Great Accuser) wanders around the world trying to accuse” and he added that “at this moment, he is accusing us strongly. And this accusation is being transformed into persecution.”

Though he did not pinpoint any particular person as the accuser, sources say Pope Francis may have been referring to any of the number of the accusations in recent months, including more recently those from Archbishop Carlo Maria Viganò and those aligned with him, who have accused senior Vatican officials under the pontificates of Popes John Paul II, Benedict XVI and Francis of cover-up of abuse and corruption, as well as those other who are taking advantage of the abuse scandals for other agendas. He is not criticizing those who bring justifiable charges of abuse and cover up against the church or its cardinals and bishops, but rather those who are using these scandals—”the sins of her children”—for other purposes, seeking to smear the church and its moral authority in various fields.

“The church is not dirty," Francis said. "Her children are, but not the mother."

Pope Francis told the synod participants, and the wider community of believers, “this is the moment to defend the mother, with prayer.” He recalled that it was for this reason that he has appealed to Catholics worldwide to pray the rosary in the month of October and to pray to the Archangel Michael and to the Virgin Mary. He urged them, “Let us continue to do so. It is a difficult moment because, through our sins, the Great Accuser seeks to attack the mother, but the mother is not to be touched.”

He was given a standing ovation when he finished speaking.

"our sins".....the sins of her children"......"the mother is not to be touched....."
what arrogance, or blindness! how can you speak in such abstractions when the mother has been shown to be rotten to the core.......this individual Catholic has not committed any CRIMES (not sins) of abuse, your employees Francis have done the all the dirty work necessary to sully and disgrace the "mother"----Francis you keep trying to lay the blame somewhere else, at someone else's feet---please give me your mailing address so I can send you a mirror at Christmas. I will also make a donation so you can go see the Vatican psychiatrist for treatment for irrational paranoia and delusions of innocence.

Tragic how francis fails to see his failings and hides behind sanctity of Mother Church. It is his cowardice to face true evil within high levels hierarchy and that is a main reason for scandal. Had he francis had courage he would send apostolic visitation to ask question how is that McCarick was climbing ladder when everybody knew his did, how was it that Wuerl was there ignoring and avoiding or Dolan was winking and smiling and hob nobing with pro abortionist politicians and so on.
Now it is Satans fault!!@ Yes Satans stands and accuses man I the court of God but are his accusations false... Did McCarrick molest and promoted scores of seminarians...Shame on them McCarrick, Wuerl Dolan Tobin.Bukowski... worse than Judas... Judas at least felt guilty gave money back and hung himself.... they still try hold their pensions and try to wait it out hoping francis will re institute them as he did McCarrick or pardon them.

When Judas, who had betrayed him, saw that Jesus was condemned, he was seized with remorse and returned the thirty pieces of silver to the chief priests and the elders. “I have sinned,” he said, “for I have betrayed innocent blood.”
So Judas threw the money into the temple and left. Then he went away and hanged himself.
When McCarrick Wuerl Tobin Bukowski and francis were accused they stayed silent and hired lawyers and PR firms and francis blamed satan and held tight to their pensions and health benefits.

The "Great Accuser" did its work when bishops were persuaded that the best course of action in the face of the sexual assault of children and teens by priests was to reassign the priests. The Church is the People of God---not some abstract entity clothed as Mother. Get a grip Francis---the chickens are coming home to roost. Chickens set in original flight by bishops who believed that the reputation of the "church" was the primary value---all the while overlooking that the people are the church, including the young who were so badly used by their clerical elders.

In days of yore, when I learned of the smearing of the Church by Know-Nothings, the APA, Nativists, et al., I thought their books, pamphlets, etc. were idiotic, full of nonsense that no sane person, however opposed to the Catholic Church, could believe. But now, with the revelations about priests and bishops, it seems that the Protestant propaganda was true. Babies' corpses sealed in convent walls were common in escaped nun books in the 19th century: now, in the 21st century, Ireland is grappling with what to do with the tiny corpses in the convent septic tank at Tuam. Etc.

God Bless and protect you Pope Francis for your wise words of Wisdom and Truth, against the evil accuser ,Satan ,the great Deceiver...just as Jesus was accused by the wicked and evil Pharisees and Saddcees but you are guided by God/the Holy Spirit at all times ...You are loved and respected by billions of faithful followers ... people of all Faiths across our world today...and protected by God at all times...God Bless and Protect you always, Holy Father , from all evil surrounding you on earth today...our great, humble strong and compassionate, Pope Francis ! #PEACE #ON #EARTH

Pope Francis...you are loved, respected and supported today 100% by all ...especially by Europe and South America...also across the entire Globe, May God Bless and Protect you always !

Churchmen have wallowed in the filth of homosexual activity for decades, and the best thing the Pope can come up with is not the "smear" the Church? I don't want to smear the Church; I want it to take a bath, and I think we badly need a Gregory VII more than a Francis I.

JOHN GRONDELSKI
Under Pope Francis the Church is, as you put it, taking a bath. His target is the structural abuse of spiritual power.