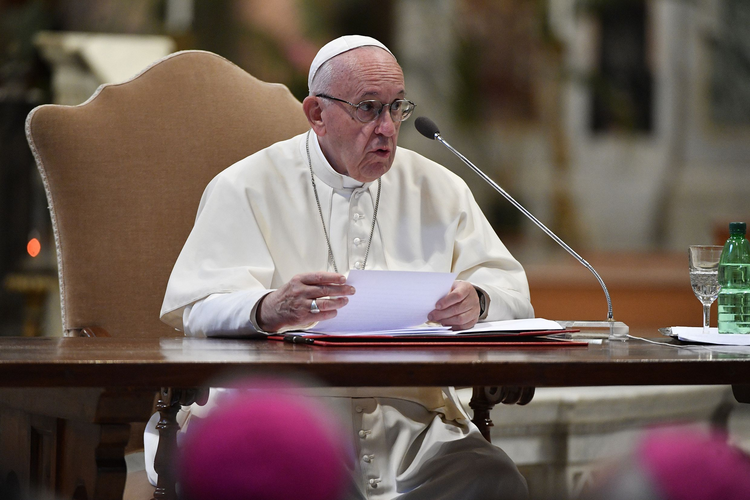 Today Pope Francis called on Catholics worldwide to pray the rosary during the month of October, asking the Mother of God and St. Michael the Archangel “to protect the church from the devil, that always aims to divide us from God and among ourselves.”

The pope’s appeal to Catholics comes at a moment of great turbulence in his five-year pontificate. Revelations of the sexual abuse of minors and vulnerable adults by clerics, and their cover-up by cardinals, bishops and religious superiors are publicized in the media in the United States, Germany, Australia, Ireland, Chile and elsewhere. There have also been accusations by a former nuncio, Archbishop Carlo Maria Viganò, that Pope Francis and Vatican officials under his two predecessors covered up cases of abuse.

The Vatican released the pope’s invitation to prayer at noon, Saturday, September 29, the feast of St. Michael the Archangel, who according to the scriptures and tradition is the leader of the army of angels against the forces of Satan in the world.

It said, “Pope Francis has decided to invite all the faithful, of the entire world, to pray the Holy Rosary every day during the Marian month of October, and to join together in prayer and penance, as the people of God, in asking the Holy Mother of God and St. Michael the Archangel to protect the church from the devil, that always aims to divide us from God and among ourselves.”

The press statement revealed that the pope took this decision before his departure for the Baltic States (Sept. 22 to 25), when he met Fréderic Fornos S.J., the international director of the Worldwide Network of Prayer for the Pope. Pope Francis then asked Father Fornos to pass this call to prayer on to Catholics, “inviting them to conclude the recitation of the rosary with the ancient invocation “Under your protection” (Sub Tuum Praesidium), and with the prayer to St. Michael the Archangel, that we be protected and helped in the battle against evil.”

The invocation is an ancient Christian hymn to the Mother of God, dating back to around the 3rd century, and is well known in the Roman Catholic, Eastern Orthodox and Oriental Orthodox traditions. The Vatican provided the text of the prayer in Latin and Italian. The English translation is as follows:

We fly to thy protection,
O Holy Mother of God;
do not despise our petitions in our necessities,
but deliver us always from all dangers,
O Glorious and Blessed Virgin. Amen.

The Vatican statement recalled that in a homily on September 11, Pope Francis quoted the first book of Job, and said: “prayer is the weapon against the Great Accuser that ‘goes around the world seeking how to accuse’. Only prayer can defeat him.”

The statement from the Holy See Press Office explained that with this appeal “the Holy Father asked the faithful of the whole world to pray so that the Holy Mother of God places the church under her protective mantle: to preserve her from the attacks of the evil one, the great accuser, and to make her at the same time always ever more aware of the faults, of the errors, of the abuses committed in the present and the past and (to make her) committed to fight without any hesitation so that the evil does not prevail.”

The Vatican said that Pope Francis has also asked that the recital of the rosary should conclude with the prayer written by Leo XIII in 1886. The English translation of the prayer is as follows:

Saint Michael Archangel, defend us in battle, be our protection against the wickedness and snares of the devil; may God rebuke him, we humbly pray; and do thou, O Prince of the heavenly host, by the power of God, cast into hell Satan and all the evil spirits who prowl through the world seeking the ruin of souls. Amen.

Pope Francis, for his part, since the beginning of his pontificate, has often spoken about the devil and has constantly reminded people that the devil is ever active, seeking to sow division in the world and in the church. Now that the church is being rocked by the sex abuse crisis and by internal conflict, as the letters of Viganò have demonstrated, the pope says he sees an even greater need for prayer. Hence his appeal to Catholics worldwide to pray fervently during the month of October asking the Mother of God’s and St. Michael the Archangel’s intercession and assistance in protecting the church from the devil.

Many people apparently see the Devil in anyone who doesn't agree with them.

Rosary & St.Micahel Prayers plus the Under Thy Protection invocation...Satan & his demons will go wild & desperate definitely...but only for a moment as this 3 powerful prayers will terribly torment this demons. Imagine the four corners of the world will be united in prayers focusing on the Great Accuser definitely satan will feel the powerful force of this prayer...
Thank you Pope Francis...for the Wisdom in Silence...and the enemy was aggrieved by your SILENCE...LIES are truly NOISY and always want the arena of confrontation..but the TRUTH is silent...and only a prayerful silence penetrates the spiritual realm of darkness.
The LIGHT shines in darkness but darkness did not overcome it.(John1:5)Godbless

If Abs Vigano is vindicated, these words of PF will appear very strange indeed imo.

Odd that the "Great Accuser" is getting credit for exposing the scandals that many of the Church's own Bishops were aware of and did everything in their power to hide. We should indeed pray to the Blessed Virgin and St. Michael the Archangel to protect the Church from all evil, especially any evil perpetrated by clerics within the Church.

Vigano is "spitting chips" as we say in Australia because he wasnt madeba cardinal, and dropped as nuncio because he was stepping on toes, hence his discord. He wasnt let loose at the silverware and is chucking a fit

He thinks those asking for answers on the sex scandals are being prompted by "The Great Accuser." He believes that He and his crony hierarchical friends are the victims. Pathetic.

M A Langkilde
1 year 3 months ago

The devil is in the detail; first the fact that Satan exists and is not a psychological phantasm or contruct of the human mind to symbolise evil: and that power and intelligence are part of diabolical nature along with malevolent will.

Is Francis mentally identifying Caesar as part of the diabolical assault? I will not ask Our Lord to stay the hand of civil and criminal law enforcement from detecting, charging, trial and punishment through due process.

Does he think of the fellowship of believers as inhabiting a stockade which has been breached by the demonic? No, there are pockets of the demonic already under the restraint of Almighty God scattered amongst the believers, scripture assures us that the gates to these enclaves shall not prevail against the forces of the Kingdom of God.

So, as Our Lady has told us in so many ways, we need to repent of our own sins, commission and omission, pray and fast and do penance first. Then we need to come to agreement to stand together in one mind that we really mean to beg the mercy of God to come in power to accomplish the task.

Now, immediately, we must bring back the exorcism rite to the sacramental baptismal rite for all ages and include the congregational renunciation of " ... Satan, and all his works, and all his service, and all his angels, and his pomps, &c."

Jorge Bergoglio seems to not be up to the job.

Certainly, this is a much-needed call for prayer, but the evil is not from Satan alone, but is the work of men entrusted wrongly by several Popes. Did Pope Francis, Pope Benedict, and Pope JP II know of these evil acts, yet look the other way? Even now I fear there is a culture of self-protection that places the protection of guilty clerics ahead of the protection of children. So while the prayer is needed, it must be accompanied by a strong agenda of change and full responsibility for the evil within. Pope Francis must respond to this crisis with a full confession of the Vatican's complicity or negligence. He must not only publish but himself actively teach a transparent process for dealing with any priest suspected of sexual abuse. It's time for the Church to hear the anger, the fear, and the disillusionment of its members concerning this scandal, and to solicit their input in an ongoing series of open fora. Be teachable and open when listening to the mothers and fathers concerned for the protection of their children. Any predator-priest must be immediately reported to local police for arrest and prosecution, with full prosecutorial assistance from local bishops and Cardinal.

He needs to pray that his fellow Jesuits, especially in America, don't bring him down. The motto in no longer AMDG. They have now put politics above their vows and their founder must be weeping for what they have done.

Their founder did as they do -- walk the path of Christ. That it intersects with polities is nothing new. Even Christ's work intersected and overturned the polities of the time.

Are you kidding me?! Clueless, Pope Francis. And, unfortunately, this statement throws responsibility for the clergy abuse crisis on “The Faithful”, not on The Church itself. As a Survivor, I am totally shocked to see that nothing, nothing, nothing has changed. Pope Francis, I’m sorry to say, this is simply stupid.

We don't trust you.

Doesn't the pope have any advisors besides 'yes' men to wake him up to how inadequate his response to sex abuse is? The great reformer pope has done nothing at all to fix this problem.

I feels something is not going good. As a result we will have to work for betterment. Thanks for share

Thanks for a much-needed laugh!

Taken from internet - more information; At the same time, Francis asked for prayers so the church becomes ever more aware of its "guilt, errors and abuses committed in the present and the past and is committed to combat it without fail to prevent evil from prevailing."

Francis identified the devil as the "Great Accuser, who roams the earth looking for ways to accuse."

M A Langkilde
1 year 3 months ago

Matthew 5:11-12 11"Blessed are you when people insult you, persecute you and falsely say all kinds of evil against you because of me. 12Rejoice and be glad, because great is your reward in heaven, for in the same way they persecuted the prophets who were before you

you will need the manuu admission information with electionvoterlist2019.in