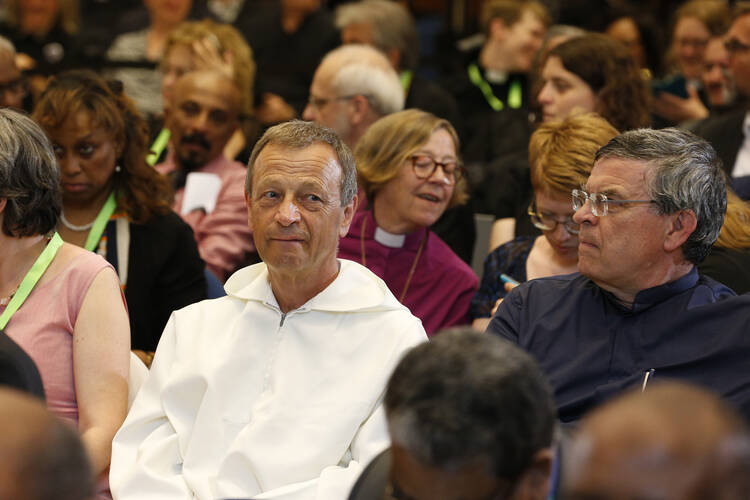 Brother Alois Leser, prior of the Taizé ecumenical community in France, is seen before the encounter at the World Council of Churches' ecumenical center in Geneva June 21. (CNS photo/Paul Haring)

Young people feeling anxious about life in the modern world could benefit from a deeper understanding of friendship, the head of the Taizé Community said in an interview with America on Wednesday.

“We live in a world of competition, where you have to be the best. This pressure comes even from the families, from society,” said Brother Alois Löser, the prior of the ecumenical monastic community in France. “This creates a very individualistic attitude. So the longing for friendship becomes deeper, but is more and more hidden, and doesn’t have space to develop and to open.”

“We live in a world of competition, where you have to be the best. This pressure comes even from the families, from society,” said Brother Alois Löser.

Brother Alois is in Rome to participate in the synod of bishops on young adults, a nearly month-long meeting of cardinals, bishops, priests and lay observers gathered to help draft a document addressing how the church can better respond to the needs of young people. Among the items being discussed inside the synod hall are migration, addiction and loneliness.

Recent studies suggest that loneliness is on the rise in the United States.

Earlier this year, the health insurance company Cigna released a study that found nearly half of all Americans report feeling lonely. Just over half of respondents, 53 percent, said they have “meaningful in-person social interactions, such as having an extended conversation with a friend or spending quality time with family, on a daily basis.” Among the most lonely Americans are 18 to 22 year olds, dubbed “Generation Z.”

A section of the working document being considered during the synod is devoted to friendship.

“Opportunities for growth in friendship are most important, during shared leisure time and vacations, and also on occasions that allow young people to become mentors for their peers or younger children, discovering the beauty of responsibility and the satisfaction that comes from serving,” it reads.

Brother Alois said the young adults involved in the Taizé movement seek out community in order to interact with peers around work, prayer and friendship.

“I think that is one of the reasons why these young people like to come to these meetings, because they feel there is a place where this deep longing for friendship can develop,” he said.

The Taizé community was founded in France in 1940 and today tens of thousands of young people visit each year to worship and pray. It is known for its unique style of chant and it hosts meetings of young people around the world.

While some of the participants in the synod have stressed the importance of the church’s presence in the digital sphere, Brother Alois said real life interactions remain essential.

“It’s very important, but it’s not enough,” he said of online interaction. “We have to speak a language of heart, of our heart, and we have to speak to the hearts of others. This is much more than a technical question of communication.”

What our lonely culture can learn from L’Arche, the Last Supper and ‘love feasts’
Blake Mayes

During a press briefing earlier in the day, Brother Alois said he hopes the church will engage in deep listening with young people to help foster friendships—and point to Jesus as the example of a friend.

“Many people would like to be listened to, but they do not find the door they should go through,” he said. “So we have to show our openness to listening. Let’s reach out to young people where they are so they understand that Christ accompanies them to holiness.”

He added, “Friendship is communion. Friendship not just in the small circles of virtual friends, but friendship is based on solidarity.”

Yes. Elsewhere it is said that it takes a village to bring up a child.
We must get away, as Christians, from the current psycho-babble that peers are the essential companions in growth and development.

Infant creches, pre-schools, play groups are instruments of the Devil.
I am one of eight children, cousin to twenty nine, father of six and more than 50 years a doctor, psychiatric specialist and psychological counsellor.

Little children pool their resources, teach each other to lie and cheat and steal and bully and rebel against governance and control in the way each has discovered by their own initiative.

The internet and mobile phones and social media forums are just as poisonous.

Any consideration of this topic must not omit reference to the little book by C S Lewis called the Four Loves. In short; Affection and Friendship and Eros and Charity after looking at need love and gift love.

It is in this context that the sexual abuse of the young is revealed to be so evil and destructive - where can adults that can be trusted be found?

Out here donation of labor to noble causes drives away loneliness.