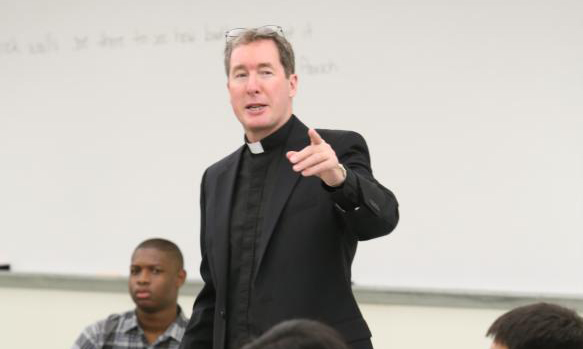 WASHINGTON (CNS) -- In a letter to the school community, the president of an all-boys Jesuit high school in suburban Washington emphasized the schools' mission to form "men for others" and reflected on the need to evaluate the school's culture in light of that value.

The letter comes in the wake of an allegation of sexual misconduct raised against Judge Brett Kavanaugh, a 1983 graduate of Georgetown Preparatory School in North Bethesda, Maryland, who has been nominated to serve on the U.S. Supreme Court.

On Sept. 16, Christine Blasey Ford, an alumna of Holton Arms School in Potomac, Maryland, accused Kavanaugh of sexually assaulting her at a party about 36 years ago when she was a 15-year-old high school student.

It is "a time for us to continue to evaluate our school culture."

Over the weekend, a second allegation of sexual misconduct was raised against Kavanaugh, dating to his freshman year at Yale University. Kavanaugh, who serves as a judge on the U.S. Court of Appeals for the District of Columbia Circuit, strongly denies both claims.

In the weeks that have followed the first accusation, news reports have come out about excessive drinking and sexual misconduct by students of Georgetown Prep in the 1980s.

In his Sept. 20 letter, the school's president, Jesuit Father James Van Dyke, noted that it is a "challenging time" for the school in light of all of these reports.

But in the midst of the difficulty, he said, it is "a time for us to continue to evaluate our school culture" and to "think deeply and long about what it means to be 'men for others,' what the vaunted Prep 'brotherhood' is really about."

He noted many strengths of the school's emphasis on being "men for others," such as its Christian Service Program and students who volunteer in programs such as Special Olympics. But at the same time, he acknowledged, "It is not that our students are perfect; they are still learning, and we hope that they will continue to learn, not only at the intellectual level, but at the spiritual, moral, psychological, social and interpersonal levels as well."

In this time, the school particularly hopes to help them to develop "a proper sense of self and a healthy understanding of masculinity, in contrast to many of the cultural models and caricatures that they see," said Father Van Dyke.

The school particularly hopes to help them to develop "a proper sense of self and a healthy understanding of masculinity."

"And it is a time to talk with them honestly and even bluntly about what respect for others, especially respect for women and other marginalized people means in very practical terms -- in actions and in words," he continued. "We are keenly aware that they are young men -- adolescents -- and that these lessons are often hard to learn because they ask young men to move beyond their natural insecurities and self-concern and to push beyond what is presumed in so much of popular culture."

Father Van Dyke noted that he is proud of the faculty and staff of the school, who serve as role models and dedicate their time and effort to teaching their students these lessons.

The school president also responded to the "caricature" that has been painted of the school, which he described as giving the impression "that we are somehow elitist, privileged, uncaring."

Father Van Dyke acknowledged that there is truth to the first two of those descriptors, saying that they are elite because "every student who comes here is chosen for his personal potential regardless of financial need, and every member of the faculty and staff is chosen precisely because we think they will help to build a good and responsible and caring community for our students."

He added that they are privileged because of the generosity of their alumni who have donated to the school and their faculty and staff who are "educated far above the norm."

But he denied the accusation that the school is entitled or uncaring because "one of the most important lessons we strive to live and to teach our students is an ethic of service and compassion and solidarity with those in need," emphasizing that this turbulent time asks them to renew their commitment to these qualities.

The priest cited many examples of the caring people in the school community, such as alumni who finance scholarships for poorer students; parents who give extra time or money so "the families who can't afford something or can't give rides can be included"; and the Community of Concern program that "helps new parents deal with and educate their sons about the false allure of alcohol, drugs, tobacco and other destructive habits."

"I know that our school and its community is well prepared to and committed to help these young men to become most truly men of faith and men for others," Father Van Dyke said.

Thank you for this article. The commitment of Georgetown Prep to educate men for others is not an easy task especially throughout adolescence in today's culture. Many hours are spent in the community away from the campus it is then that the true test of what it means to be a person for others really comes into play. Schools like Georgetown Prep play a huge role in adolescent high school education and in developing integrity that will carry on hopefully through adulthood. Mistakes are made all through our lives and hopefully we all learn from these times when we don't act with the greatest amount of good sense and integrity. The key in my opinion is keeping an open conversation among the young men in your school and with their parents so that they can develop the necessary tools to head on to college and not succumb to peer pressures. Having raised two children, I tried to teach them the ins and outs of college parties and we talked about the drinking and availability of drugs both in high school and on college campuses both of which can lead to times when judgment fails and mistakes are made which can take a toll one's future many years down the road. None of us are perfect and only open conversations with adults both in school and at home can make us a "person for others" and also honor ourselves at the same time.

It is truly disappointing as someone who has known Jesuits and has had Jesuit educated male friends since high school and then worked with Jesuits in New York City to read about Brett Kavanaugh and his friends from Georgetown Prep. These are not “Men for others,” that St. Ignatius was talking about or that we aspire to be because even women include ourselves in that group. Although a product of twelve years of Catholic schools and many more years of faith formation, I chose to teach in public schools and I can vouch for moral, respectful, kind, thoughtful and considerate young men, not all Catholic or Christians who were generous of their time and talents. Their many volunteer activities encompassed tutoring after school at the Boys and Girls Clubs, working at a local soup kitchen, delivering for the local Meals On Wheels organization, and many other worthy causes without the religious motivation. These young men represented all economic groups and races and why I initially expressed disappointment about what went on at Georgetown Prep during Kavanaugh’s period there and as manifested in his yearbook. I am embarrassed as a Catholic and as a devoted disciple of St. Ignatius.

Hopefully the school is going to be more proactive in addressing the (perhaps) underlying social problem evident in the Kavanaugh's case, 'institutional' drinking. Men aren't for anybody, even themselves, when they're drunk.