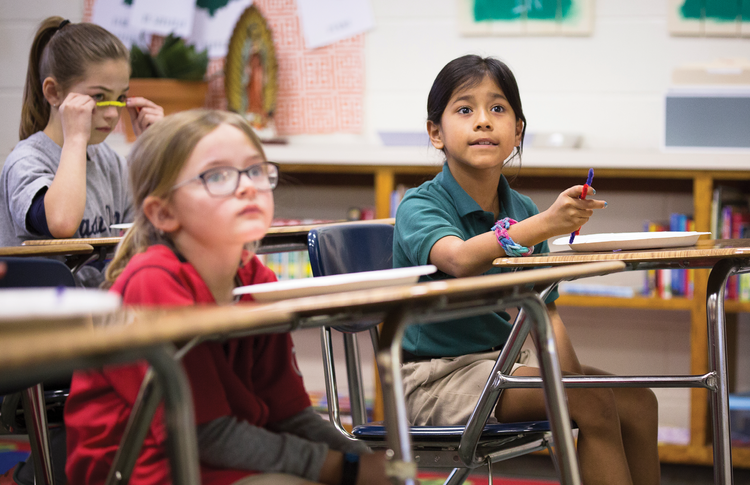 A second-grade Spanish class at Holy Name of Jesus Catholic School in Henderson, Ky., in March 2018. The school has 33 students registered as Hispanic for the 2018-19 academic year, up three from last year. (CNS photo/Tyler Orsburn)

The student demographics in many Catholic elementary and high schools are changing. When will school faculties begin to reflect those changes?

Hosffman Ospino, an associate professor of Hispanic ministry and religious education at Boston College and a co-author of the 2016 report “Catholic Schools in an Increasingly Hispanic Church,” agrees that there is a vicious cycle: “The absence of students of different cultures, races and ethnicities in our Catholic schools today most likely will have an impact in the makeup of the teaching and administrative bodies in these institutions in the future.”

“About 18 percent of Hispanics 21 and older has a college degree. This makes the pool of potential teachers and administrators in Catholic schools quite small.”

Mr. Ospino added, “The number of Hispanics, for example, with college degrees is quite low. About 18 percent of Hispanics 21 and older has a college degree. This makes the pool of potential teachers and administrators in Catholic schools quite small.”

Other factors also explain why Hispanics and nonwhite teachers make up less than one-fifth of Catholic-school faculty. Generally, “a teaching career pays a lot less than [other jobs in] the private sector,” Sister McDonald said. This problem is compounded for Catholic-school teachers, who earn less than public school peers. The low salaries may discourage good candidates who may qualify for higher-paying jobs. And depending on state laws, said Sister McDonald, “if you want to get state teaching certification, you have to do student-teaching at a public school.”

This is “certainly not reflective in either sector of the student population we have in our schools,” Sister McDonald said, adding, “More and more studies are showing that students do better if they see their own race and ethnicity reflected in some of their teachers.”

Mr. Ospino also highlighted the benefits of more diverse staffs. “The literature is abundant. Teacher diversity enhances participation, self-esteem, affirmation of particular values; it helps to reduce biases such as racism and discrimination, and it improves [student test] scores, among other benefits.

“Students from underrepresented communities see themselves as leaders, like their teachers, and are motivated to follow in their footsteps. Diversifying the teacher and administrative populations in Catholic schools is a win-win option for everyone.”

Catholic school systems do not appear to have developed a coherent strategy aimed at addressing diversity concerns. “I am not aware of any particular outreach efforts for teacher recruitment based on diversity,” Sister McDonald said. “Everyone says they would like to have more diversity...but the applicants are not there.”

Dioceses “look for diversity,” she adds, but “they have not gone out on a major campaign.” As Latinos have come to make up a larger segment of the U.S. church, they have become the focus of diversity-centered outreach.

Mr. Ospino commends the “excellent work” many Catholic universities are undertaking “in recruiting students from different cultural, racial and ethnic backgrounds to prepare them to serve as teachers and administrators in Catholic schools.”

But more can be done. Ms. Weitzel-O’Neill and Ms. Melley are optimistic about the future of Catholic education, describing initiatives geared toward young Latino students.

“The rock of Catholicism is creating a community of trust and love and respect for one another,” said Ms. Weitzel-O’Neill. Two-way-immersion schools, in which students participate in a bilingual, bicultural curriculum from kindergarten onward, take to heart those ideals.

This model serves students who have previously been marginalized, said Ms. Weitzel-O’Neill and Ms. Melley, while immersing students of all ethnicities in two languages. “Children taught to speak in more than one language outperform students in monolingual education systems,” Ms. Weitzel-O’Neill said.

Mr. Ospino also believes that diversity starts at the roots. “I firmly think that the best way to diversify the teaching and administrative bodies in Catholic schools in the future is diversifying as much as possible the student population in these institutions today.”

While achieving staff diversity can be a struggle for some Catholic schools, others are succeeding. Msgr. Aidan Carroll, president of Bishop Amat High School in Los Angeles, said his school’s faculty is as diverse as its student enrollment, which he estimated to be more than 70 percent Latino. He points to the 20 teachers who are themselves graduates of Bishop Amat as part of the explanation.

Infographic: A Latino future for the church and society
Antonio De Loera-Brust

“Our first concern is always that the person has the skills and preparation for a particular position,” he said. “We don’t consciously go out [and hire for diversity]. It reflects our geographical area,” he said, noting that there are both Filipino students and teachers at Bishop Amat. “Most of our teachers will come from nearby neighborhoods.”

A variety of students are lumped together under the “Latino” label at Bishop Amat, he said, from those who speak Spanish at home to second- and third-generation immigrants who are learning Spanish as a second language and those who have one Hispanic parent and one non-Hispanic parent.

“We emphasize inclusiveness and respect for other people,” Msgr. Carroll said. “I thank the Lord that we achieve a high level of success in this. There are kids of all races on the football team, and they are like brothers. They are united.”

Infographic sources: “United States Catholic Elementary and Secondary Schools 2017-2018,” National Catholic Educational Association; “A Look at Teacher Pay Across the United States in 2017” and Occupational Outlook Handbook, U.S. Bureau of Labor Statistics; “The Annual Financial Report: Catholic Elementary and Secondary Schools in the United States: 2016-2017,” prepared for the N.C.E.A. by the Center for Applied Research in the Apostolate. Salaries for public school systems do not include special education teachers, who have higher salaries. Salaries for public elementary schools are for grades K-6; salaries for Catholic elementary schools are for grades K-8. Hispanics can be members of any race and are counted separately from racial groups.

Brandon Sanchez is an O'Hare fellow.

I would also like to add that such changes in Catholic schools will have a positive impact on the attitude of modern youth towards schools and a significant increase in the number of students.

It seems to me that an increase in the percentage of non-white teachers in Catholic schools is a very successful idea. I am a teacher and a writer from https://senperfect.com/ and therefore I can assert that it is much easier for children to open to teachers of their race. It will also really reduce the level of racism. Accordingly, most non-white children will feel the support of the state and significantly increase the sense of security.