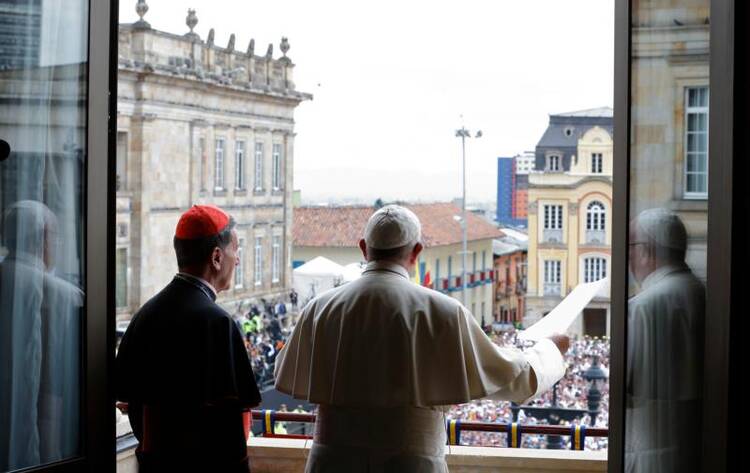 BOGOTA, Colombia (CNS) -- A year after Pope Francis urged Colombians to build unity and a nation for all after more than half a century of conflict, the country's Catholic Church continues to play a key role in the quest for reconciliation.

Dioceses throughout the country celebrated Peace Week Sept. 2-9. The event began 25 years ago to underscore the church's commitment to a negotiated solution to the long-running armed conflict between government security forces and armed guerrilla groups.

In addition, church leaders participate in national councils for implementing the peace agreements signed nearly two years ago with the Revolutionary Armed Forces of Colombia, or FARC, the largest rebel group.

Implementation of the accords will take time, however, and events since the agreement was inked in November 2016 indicate how difficult the task is likely to be.

A slim majority of voters opposed the peace accords in a referendum held shortly after they were signed. President Ivan Duque, who has taken a harder line than his predecessor, has said he might make "adjustments" to the accords.

"It's a complex agreement in a very large country," Borja Paladini, who heads a program to monitor the peace accords, told Catholic News Service.

The program, called Barometer, is sponsored by the Kroc Institute for International Peace Studies at the University of Notre Dame.

Barometer has identified 578 specific provisions that could be monitored. A team that has grown from five to about 40 people in Colombia and at the university in South Bend, Indiana, scours news reports, conducts interviews and gathers other information about progress on the provisions and tracks them using an online database.

The program collaborates closely with the Colombian bishops' social ministry office, which works in every region of the country and is widely trusted, Paladini said.

The first agreement was implemented immediately when FARC officially laid down arms, retreated to designated areas and were allotted seats in Congress.

"That was done very quickly," said Msgr. Hector Fabio Henao, who heads the Colombian bishops' social ministry office as well as the steering committee of the national Council on Peace, Reconciliation and Peaceful Coexistence.

Other provisions, including land reform, reparations for victims of the violence, programs to help former guerrillas rejoin rural society, and replacement of illicit drug crops with legal crops, are moving more slowly.

"They are longer-range programs that are more complex, because they also require significant funding, especially the programs that have to do with integral rural development," Msgr. Henao told CNS.

Other provisions, including land reform, reparations for victims of the violence, programs to help former guerrillas rejoin rural society, and replacement of illicit drug crops with legal crops, are moving more slowly.

Community leaders said the assistance for switching from drug crops, such as coca, the main ingredient in cocaine, has been slow to arrive. Meanwhile, farmers are caught in the middle. They are threatened by drug-trafficking gangs if they stop growing drug crops, but risk losing government assistance if they do not uproot their plants.

Community leaders who support crop substitution or other government programs are often targeted for assassination. More than 300 community leaders, environmentalists and human rights defenders have been murdered since the peace accords were signed, according to the government Ombudsman's Office.

FARC leaders who formed a new political group reported that at least 75 former guerrillas have been killed.

Meanwhile, small groups of rebels remain in some rural areas. They are commonly called "dissidents," suggesting that they rejected the peace plan. Former rebels, however, said they are FARC members who remain armed and ready in case the peace process collapses.

Those groups appear to be growing, according to Barometer's data, and if people become impatient or disillusioned with the slow pace of progress with rural development programs, there is fear that they could become stronger.

The conflict uprooted people in various ways, and many continue to suffer.

Some fled the violence and are now returning home, only to find their farms occupied by those who forced them out.

Rural parents sometimes sent teenagers to cities to save them from joining or being forcibly recruited into rebel ranks. But many struggle to earn a living in urban areas, where they may fall prey to criminal groups, especially drug traffickers.

"A kid can go from being a nobody in his neighborhood to having a gun in his hand," said Rosa Ines Floriano of the bishops' social ministry office.

The church continues to work with both top government officials and victims in remote communities that were shattered by the conflict, "especially helping to ensure that the programs implemented after the signing of the accords take an approach based on reconciliation," Msgr. Henao said.

"A kid can go from being a nobody in his neighborhood to having a gun in his hand," said Rosa Ines Floriano of the bishops' social ministry office.

"The polarization of Colombian society demands a great deal of work on reconciliation in all regions and at all levels," he said, as well as "working to give victims back their dignity and to open the door for those who were involved in the conflict to also regain the dignity that they lost."

The danger is that people will grow impatient, but Paladini said his group's monitoring shows that progress is being made.

"The glass may seem half empty from the standpoint of people's expectations, but it is half full in comparison" with peace processes that have followed conflicts in other parts of the world, he said.