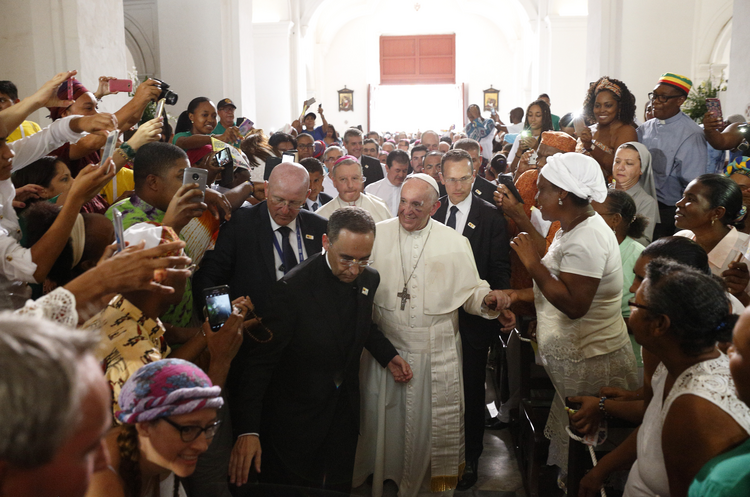 Pope Francis greets people as he arrives to visit the Shrine of St. Peter Claver in Cartagena, Colombia, on Sept. 10. (CNS photo/Paul Haring)

During a time of profound political and social agitations, Colombia received an authentic gift to promote the building of peace: Pope Francis visited us. The joy was uncontainable, and he filled us with hope even as he disturbed and challenged us.

We must keep his message alive, for it is a gift that could propel us to a time of grace. No more victims, no more pain and no more injustices coming from the monsters of war. The humble and simple strength of Pope Francis allows us to imagine that possibility, even in our blood-bathed land.

But first, it is fundamental to open ourselves to the person of Jesus, the inspiration and guide to all the gestures and words of Pope Francis. An opportunity like this visit can put us face to face with our Master. It should inflame our knowledge and deep love that Francis was sent by Jesus, who heals and liberates from all death and injustice.

Francis is a Pentecost in our church. In an extraordinary way, his actions are nothing less than an amplification of a singular directive: We must be connected to Jesus if we are to be coherent believers who bring life to the world. But how can we be connected to him? St. Ignatius of Loyola, master of Christian prayer, shows us the way: Search for and find God in all things, prove love through concrete actions, help reconcile those who are in conflict, dialogue with those who are different without looking to impose ourselves on them, and live in a joy sustained by the certainty that God’s company never disappears.

Francis is a Pentecost in our church.

Second, Francis urges a culture of peace in all of our actions. Maybe we are now witnessing, as the pope himself has said, a kind of third world war. That should not trouble our peace. We should be bold and imagine, create and conserve a peaceful culture in Colombia. But that requires us to put ourselves “out there,” to search for a poverty that threatens our comfort zones.

To do this, we must impregnate ourselves with Jesus, as it is possible to embrace others in equal human dignity only when we are humbled by the love Jesus had for the least among us. In this sense, Francis is reforming more than the Catholic Church. He is inspiring humanity to see the refugee and the economically excluded, as well as the excesses against our “common home.” The pope’s message is relevant to both believers and nonbelievers.

Recall his most significant gestures—like his visit to Lampedusa, on the coast of the Mediterranean Sea, where thousands of refugees have died, or the visits to the favelas in Rio de Janeiro, or the frequent visits to prisons and hospitals. Francis inspires Colombia to learn to overcome the lust for power that has tainted the public square with corruption; the absurd wars that have shattered entire communities; the structural injustices that kill children and young people mired in poverty; the economic inequality that leaves ever more people in need; and many other realities that may appear as a whirlwind of disasters.

Colombia should undertake this conversion as we own our history. We are the ones who will make it possible for Colombia to be a country that responds to the constant calling of the successor of Peter, the fisherman.

Colombia should undertake this conversion as we own our history.

In the meeting the Jesuits of Colombia had with Pope Francis, we were able to see a man who spoke from his heart with the simplicity and joy of someone who is free before power—and who does not look for a reality beyond embracing the wounded, blessing children and listening to those who have suffered the scourge of violence and poverty.

I recall Francisco De Roux, S.J., who four years ago told us fellow Jesuits that Colombia is going through a spiritual crisis, and the only solution to the great violations of human dignity is a spiritual one. If we follow his profound message we will notice that the visit of Pope Francis, the great reformer, is precisely the impetus for undertaking the serious process of reforming our personal spirituality on the way to building a truly peaceful Colombia.

I leave you with a message given by the Holy Father at the end of a day on which he heard from the victims in the city of Villavicencio: God forgives through me. Yes, we have to open ourselves to the silence of prayer to allow God to be the one who forgives us. It cannot happen any other way.

Our will is weak, and maybe the most important thing is to take the first step, as St. Peter Claver did when he stood up for African slaves, despite facing harsh consequences. He put his life on the line for those he loved. Perhaps today we may all unite to bring peace in the world, so that we can say yes to the forgiveness that only God can give: “Take, Lord, and receive all my liberty, my memory, my understanding and my entire will. All I have and call my own, you have given all to me. To you, Lord, I return it. Everything is yours; do with it what you will. Give me your love and your grace, which is enough for me. Amen” (Spiritual Exercises of St. Ignatius of Loyola, 234).

Beautifully written, and a very good take on who Pope Francis is and how he leads. Now I know why we, in North America, should be looking south to see what the future of Catholicism looks like.

Esteban Morales Herrera, S.J., is a Jesuit scholastic in Colombia.