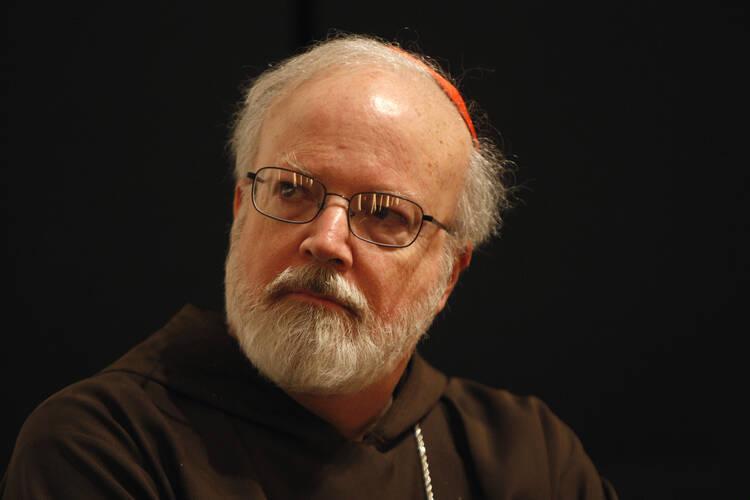 Following up on remarks to “60 Minutes” about the clergy sex abuse crisis and other controversial topics, Boston Cardinal Sean O’Malley has stressed that the Catholic Church needs a system to hold bishops accountable and must “avoid crowd-based condemnations.”

“We are all aware that Catholics want their leaders to be held accountable for the safety of children, but the accountability has been sporadic,” O’Malley wrote in a column posted on Nov. 19 at the website of the archdiocesan newspaper. “We need clear protocols that will replace the improvisation and inertia that has often been the response in these matters.”

“Bishops also deserve due process that allows them to have an opportunity for a fair hearing,” he added.

O’Malley’s column was responding to both praise and criticism of his CBS interview broadcast on Nov. 16 in which he said the Vatican needs to respond “urgently” to cases like that of Missouri Bishop Robert Finn, who remains in office despite a conviction in 2012 for failure to report concerns about a priest, the Rev. Shawn Ratigan, who was later convicted of federal child pornography charges.

The cardinal said Francis, who recently sent a Canadian archbishop to Finn’s diocese to investigate, was personally aware of the situation.

In the “60 Minutes” interview, O’Malley also called the Vatican’s investigation of American nuns a “disaster” and said if he were starting a church “I’d love to have women priests,” but he added that’s not what Jesus did. Both comments sparked strong reactions.

In his column, O’Malley—in his characteristically wry tone—praised the “60 Minutes” team that spent months on the piece and said he knew “the questions would not be about the weather and the Red Sox.” He also acknowledged that he was speaking frankly about “provocative issues that are seldom addressed by members of the hierarchy.”

He said he wanted to expand on his comments, especially his remarks about holding bishops accountable for shielding priests and other misdeeds—an issue that goes to the heart of the institutional church’s credibility crisis.

The cardinal was sent to Boston in 2002 to help clean up the abuse scandal that rocked a bastion of U.S. Catholicism and quickly spread to the rest of the American church. Pope Francis has since tapped O’Malley — considered his closest adviser in the U.S. church—to head a Vatican commission to address the abuse crisis.

“After all that American Catholics have been through in the past decade, survivors and the community at large understandably are demanding transparency and accountability,” O’Malley wrote. “As a Church, the safety of children must be our priority. At the same time, we need to provide justice for all and avoid crowd-based condemnations.”

While Francis has fired bishops for various reasons, and in one case defrocked and tried a Vatican diplomat who abused children, the pontiff reportedly wants to develop a system for judging and disciplining bishops, something that has always been left to the personal discretion of the pope.

The goal is to make hierarchical accountability more transparent and common, and also to counteract any tendency by church authorities to defensively circle the wagons when one of their number is criticized.

Referring to the Vatican’s long-running investigation of the Leadership Conference of Women Religious, which represents most of the 50,000 Catholic nuns in the U.S., O’Malley reiterated his criticism of the way the probe was conducted and the way it has “alienated” many sisters and caused a public relations headache for the American bishops.

“Hopefully when the final report of the visitations is presented, it will be a more positive experience that will contribute to healing in our Church and be helpful for the cause of religious life,” O’Malley wrote.

The cardinal also recognized that the church’s ban against ordaining women to the priesthood is “particularly painful to many Catholic women.” He noted that St. Therese of Lisieux wanted to be a priest and that Catholic women “are often holier, smarter and more hard-working than men.”

But he said the church “is called to be faithful to Christ’s will, and that is not always easy or popular.”

David Gibson - Religion News Service
Show Comments (
1
)
Comments are automatically closed two weeks after an article's initial publication. See our comments policy for more.
Walter Sandell
8 years 2 months ago
Delecta Graviora “In July 2010, the Vatican placed Roman Catholic Women Priests in the most serious crime category, “delecta graviora”, right along with the pedophiles. The only difference is that the Vatican excommunicated the women priests, but not the pedophiles. “ Bridget Mary Meehan, RCWP (BMM) “Who are the pope and hierarchy to say that men only have a call to priestly ministry? The Pope and hierarchy cannot limit God’s call with religious decrees, and rules like canon law. If they do, they will remain blind? (BMM) “Like Rosa Parks, who refused to sit in the back of the bus, Roman Catholic Women Priests demonstrate by our actions of prophetic obedience to the Spirit that an unjust law must be broken in order to be changed. “ (BMM) “This discrimination against women contradicts the Second Vatican Council document, The Church in the Modern World that states “Every type of discrimination… based on sex is to be eradicated as contrary to God’s intent.” The tragedy is that sexism is a major factor in the physical, emotional and spiritual abuse of women and too often leads to violence against women worldwide. In 1975, an international group of Catholic Scripture scholars, the Pontifical Biblical Commission, concluded that the ordination of women could not be excluded on the basis of Scripture. The church’s ban on women priests contradicts its own scholarship.” (BMM) The real ‘delecta graviora’ is the exclusion of women from the priesthood and hierarchy. Abuse of authority should also fit under this category. The ‘indoctrination’ (brainwashing) of candidates for ordination creates a mindset heavily dependent on obedience and uniformity. “Don’t even think about it!” applies to much of what is taught. Priests who believe women can and should be considered for priesthood have told me, “I have to be careful!” Where is their prophetic courage? I believe that the refusal to ‘even talk about it’ is almost as grave as the abuse of children. It is the abuse of half of humanity, half of the Church.