Abuse in Ireland: Pressure mounts for pope to address scandal 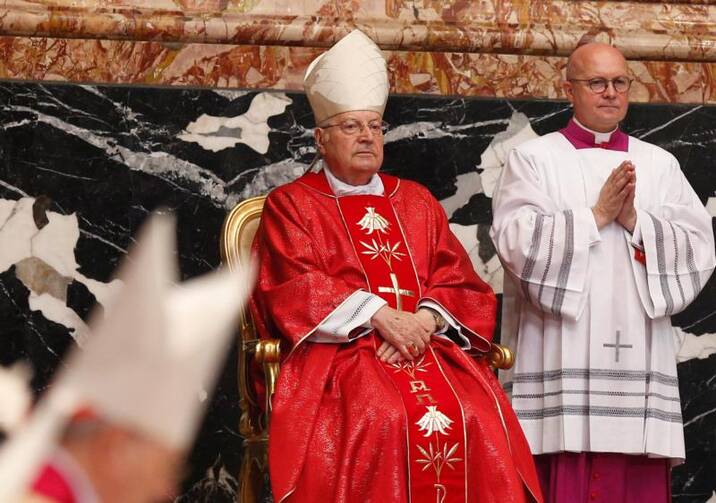 Cardinal Angelo Sodano, dean of the College of Cardinals, is pictured during the funeral Mass for French Cardinal Jean-Louis Tauran in St. Peter's Basilica at the Vatican July 12. Former Irish government officials allege that Cardinal Sodano asked them to protect church records and limit the financial liability of the church from abuse claims. (CNS photo/Paul Haring)

VATICAN CITY (CNS) -- Pope Francis is traveling to Ireland specifically for the World Meeting of Families, but the sex abuse crisis is dominating headlines before his Aug. 25-26 trip.

While coverage of clerical abuse in the United States, Chile and Australia continues, Irish news media have been filled with articles about how a top Vatican official allegedly tried to get Irish government officials to support deals that would protect church records of abuse allegations and limit the financial liability of the church.

Former Irish President Mary McAleese said Cardinal Angelo Sodano, then the Vatican secretary of state, approached her in November 2003 about an agreement or concordat to protect church records, and Dermot Ahern, Ireland's former foreign minister, said Cardinal Sodano asked him in November 2004 about the Irish government indemnifying the church against court-ordered compensation for victims. Many of the institutions where the abuse took place were supported by the state or subject to state inspection.

Cardinal Sodano, the now 90-year-old dean of the College of Cardinals, has not responded to the claims, nor has the Vatican press office.

Writing Aug. 7 in the Irish Times, Marie Collins, who had been one of the abuse survivors Pope Francis named to the Pontifical Commission for the Protection of Minors, said that in Dublin the pope "should admit the responsibility the Vatican and church leadership hold for past events in Ireland and set out how he is going to deal with the abuses happening today in other parts of the Catholic world."

"He needs to do more than make promises," Collins wrote. "He must commit to action."

U.S. Dominican Father Thomas Doyle, who has spent decades working with survivors of clerical sexual abuse, told the Irish radio RTE Aug. 13 he hoped Pope Francis would have the courage to admit publicly that the Vatican itself was involved in covering up abuse crimes.

"I believe that kind of a statement coming from him is absolutely necessary because the day is long gone when people will tolerate them saying, 'Well, we're sorry for the pain you suffered, for the mistakes that were made.' No," he said, "it wasn't mistakes. It was an intentional program, an intentional, systemic program" to protect the church above all else.

Officials chose to "sacrifice the thousands of victims for the image and the welfare and the power of the institution," Father Doyle said. "The apology has to come from the top."

A meeting with Irish survivors of abuse is not on the pope's official schedule, but in the past, such meetings were announced only after they had taken place.

Irish newspapers reported Aug. 1 that Archbishop Diarmuid Martin of Dublin said he was certain Pope Francis would speak of the abuse scandal, but he was not sure that the pope would have time to meet with survivors given that he would be in Ireland only 36 hours.

Collins told RTE the next day Vatican officials "are delusional" if they believe not meeting survivors would keep the topic of abuse out of the news while the pope is in Dublin. "Ignoring an issue is not going to make it go away."

"Irish news media have been filled with articles about how a top Vatican official allegedly tried to get Irish government officials to support deals that would protect church records of abuse allegations and limit the financial liability of the church."

What the pope "needs to do, particularly now as the flood gates are opening around the world," she said, is to state clearly "what he is going to do about this crisis in the church. At the moment it is not being addressed."

A session on "safeguarding children and vulnerable adults" is scheduled for the World Meeting of Families' pastoral congress Aug. 24, the day before the pope arrives. It will be moderated by Cardinal Sean P. O'Malley of Boston, president of the pontifical commission, and Collins is scheduled to be one of the presenters.

The magnitude of abuse inflicted by Catholic priests, religious brothers and women religious in Ireland is staggering.

Beginning in the mid-1990s, the church in Ireland was rocked by a series of very public revelations about sexual abuse and, particularly, about how the abuse and allegations of it were mishandled by senior church leaders. The abuse included thousands of cases of sexual and physical abuse in Catholic residential schools and care facilities, including the so-called Magdalene laundries where young women were sent for having children out of wedlock or being suspected of sexual promiscuity.

A series of judicial reports detailed a pattern of cover-up and a tendency to put the avoidance of scandal and the reputation of the church ahead of the needs of those who were abused. Four Irish bishops resigned after being criticized for their handling of abuse allegations.

One of the judicial reports, released in 2009, focused on the Archdiocese of Dublin in the years 1975-2004. An independent Commission of Investigation, headed by Judge Yvonne Murphy, looked at the handling of some 325 abuse claims in the archdiocese over that 30-year period.

The report concluded that during those years, rather than being concerned about the victims, Catholic leaders were more interested in "the maintenance of secrecy, the avoidance of scandal, the protection of the reputation of the church and the preservation of its assets."

In 2010, then-Pope Benedict XVI wrote a letter to the people of Ireland and addressed survivors directly: "You have suffered grievously, and I am truly sorry. I know that nothing can undo the wrong you have endured. Your trust has been betrayed and your dignity has been violated. Many of you found that, when you were courageous enough to speak of what happened to you, no one would listen."

Pope Benedict also ordered an apostolic visitation of Ireland's four archdioceses, its seminaries and its religious orders and put U.S. Archbishop Charles J. Brown, a longtime official at the Congregation for the Doctrine of the Faith, in charge of the nunciature in Ireland. The move came after the previous nuncio, Archbishop Giuseppe Leanza, was recalled in 2011 after an independent judicial report accused the Holy See of being "entirely unhelpful" to Irish bishops trying to deal with abuse.

In July 2014, Pope Francis held his first meeting as pope with survivors, including two from Ireland. They were accompanied by Collins, who was then serving on the Pontifical Commission for the Protection of Minors. Collins resigned from the commission in March 2017, saying some Vatican offices were blocking the implementation of recommendations made by the commission.