Is there a sexual abuse reckoning coming for the Latino church? 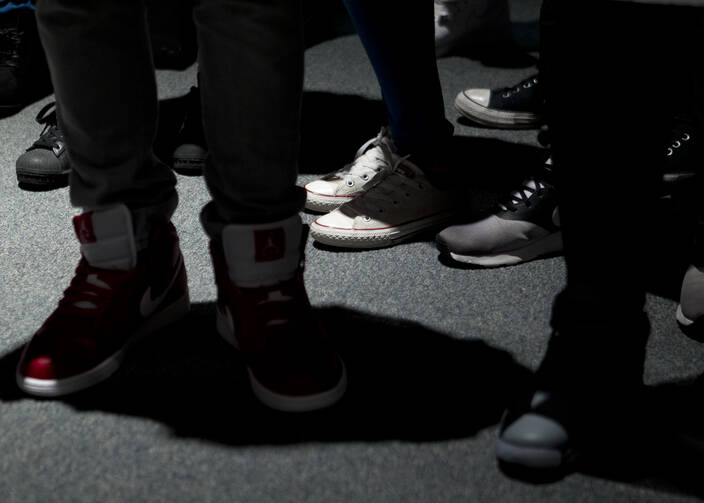 When he was 12, Dominic told his parents he did not want to be an altar server anymore. He had been serving at a parish in Southern California run by the ex-priest Michael Baker, who would later be convicted of molesting children.

“We need to learn to listen to our children,” Dominic’s mother, Virginia Zamora, told America. “They do have symptoms.... My son didn’t want to go to church again. He hated God.”

Her son was abused for years, she said. The ex-priest would tell her son: “No one is going to believe you. Who’s going to believe you over me?” Ms. Zamora said the revelations about Theodore McCarrick should be a wake-up call for Latinos, whom she described as reluctant to speak against the clergy.

“We need to learn to listen to our children.... My son didn’t want to go to church again. He hated God.”

“Hispanics believe it’s their cross to bear, that’s how they live with it,” said Ms. Zamora, who works with the Survivors Network of those Abused by Priests, known as SNAP. “But it’s not our cross. We need to speak up.”

Hosffman Ospino, an associate professor of Hispanic ministry and religious education at Boston College, said the Latino community “tends to go under the radar.”

“It worries me that in some cases of abuse, some Hispanics feel afraid of their legal situation,” he said, referring to undocumented immigrants.

Because of their culture, immigrants, in general, tend to support the clergy, Mr. Ospino said. In 2002, white Catholics in Boston demonstrated against the church as decades of abuse were revealed. But the Latino community had a different reaction, he said.

“While the Catholic community was protesting—and rightly so—the Latino community was holding vigils for their priests and the victims as well,” Mr. Ospino said. “The tone was different. It’s not that they were naïve because they’re immigrants. But this cultural Catholicism somehow invites responses that also involve prayer, forgiveness and reconciliation.”

Because of their culture, immigrants, in general, tend to support the clergy.

Yet he believes second- and third-generation Hispanics may react differently.

“They may grow up with a sense of suspicion, and that sense of suspicion will rob them of role models who are bishops and priests,” he said. “All of these cases of sexual misconduct continue to undermine the credibility of the Catholic Church, particularly among young Hispanics.”

Cristofer Pereyra, the director of the Hispanic Mission Office of the Diocese of Phoenix, said the sexual abuse crisis had less of an impact on Latino Catholics who attend Mass regularly. Only 3 percent of Latinos cited the abuse crisis as a reason why they left the church in a2014 Pew Research Center study. At the same time, immigrants are likely aware of abuse, Mr. Pereyra said, citing widespread incidents in Latin America.

With respect to former cardinal McCarrick, in particular, Mr. Pereyra has not seen a lot of coverage in the Spanish-language media. He compared it to the nonstop stories about ex-priest Alberto Cutié, a television personality who left the priesthood after he was photographed kissing a woman on a Florida beach.

“For Hispanics, whatever the priest says goes. But that’s not right. The priest is not God. Nobody is above God.”

“Somehow, there was a greater disappointment in that case,” Mr. Pereyra said. “They loved that priest so much, but with the same passion, they detested him. There is more reverence for priests, but at the same time they hold them to a higher standard because of the office.”

The church also need to encourage the Latino community to come forward with allegations, he said. “We’ve made a lot of progress, but we still have to do more.”

Deacon Bernie Nojadera, the executive director of the U.S. Conference of Catholic Bishops’ office of Child and Youth Protection, said dioceses are preparing Spanish-speaking trainers to educate parishioners about abuse.

While the church will provide counseling to survivors of abuse, Deacon Nojadera said immigrants often times look for informal help from friends and family.

“As the demographics are changing, we’re reaching out and providing materials,” he said. “It’s a tough topic to talk about, but this is an evil. This is a crime. We need to be able to talk about it.”

Ms. Zamora said cultural dispositions may be tough to overcome. “As for Hispanics, whatever the priest says goes. But that’s not right,” she said. “The priest is not God. Nobody is above God.”

Ms. Zamora believes that the abuse her son suffered led to his alcoholism. A few years ago, he died of cirrhosis of the liver.

Shhh! Don't tell Roger Mahony this. For decades he controlled the Latino community in Los Angeles. The political pressure not to prosecute him was huge. A mountain of evidence...but weak DA's. 720 million dollars later, Mahony still wears the red hat. The American Church continues to be corrupt as hell with many of Mahony's defenders still running churches.

How inconvenient for Pope Francis to ban the death penalty as inhumane, just when the impartial civil authorities in Chile are taking a real look at child rape by priests and Bishops.

That's twisting due process by attempting to remove possible civil penalties because one knows one's subordinates are guilty.

Of course I'm assuming Chile has the death penalty.

Are priests and bishops who rape children then hide their crime, eligible for a more lenient penalty just because they have studied the bible, the Word of Christ?

That is a perversion of Justice. That is hypocrisy.

As long as we are discussing Los Angeles perhaps the advice of detective Lieutenant Columbo should be heeded, "When the wall starts to crack, PUSH!"

Fr James Alison explains that the McCarrick affair is anything but uniquely the stuff of the Anglophone part of the Church ... it seems that the day of reckoning is upon us ... see http://www.thetablet.co.uk/features/2/14068/homosexuality-among-the-clergy-caught-in-a-trap-of-dishonesty

"Would it shock you to know that the leading force behind the term “gender ideology”, and the campaign against it, was a gay cardinal? Or that a gay priest wrote the official 2005 explanation as to why gay men could not be priests?

I learned of the (now dead) Latin American cardinal’s reputation for violence towards the rent boys he frequented from a social worker in his home town, and later discovered that this and other outrages were open secrets in both his homeland and Rome. Paris-based Mgr Tony Anatrella was a Vatican expert on homosexuality, one of very few authors the Congregation for the Doctrine of the Faith recommended on the subject, alongside Drs Joseph Nicolosi, Gerard van den Aardweg and Aquilino Polaino, gay-cure proponents all. Anatrella had long been reported to have engaged in inappropriate touching with seminarians and others who came to him for help in dealing with their so-called “same-sex attraction”. As recently as this June, and after many years of shameful ecclesiastical obfuscation in France and Italy, those reports have been found to be credible, and Anatrella has been suspended from public ministry. If it does shock you that such paragons of homophobia-dressed-as-Christianity might have been “protesting too much”, prepare yourself for a rough ride over the next few years.

I start with the as yet unnamed Latin American prelate and Anatrella, both from outside the English-speaking world, because the accounts of (now former) Cardinal Theodore McCarrick’s wrongdoings, added to those of the late Cardinal Keith O’Brien, might have fooled you into thinking that this is an anglophone thing. It isn’t. Similar tales abound across the four language groups with which I am directly familiar. And now that the dominoes are starting to fall, both the name and the deeds of the Latin American will surely come into the record soon."