Dear anxious millennials: I have the perfect prayer for you 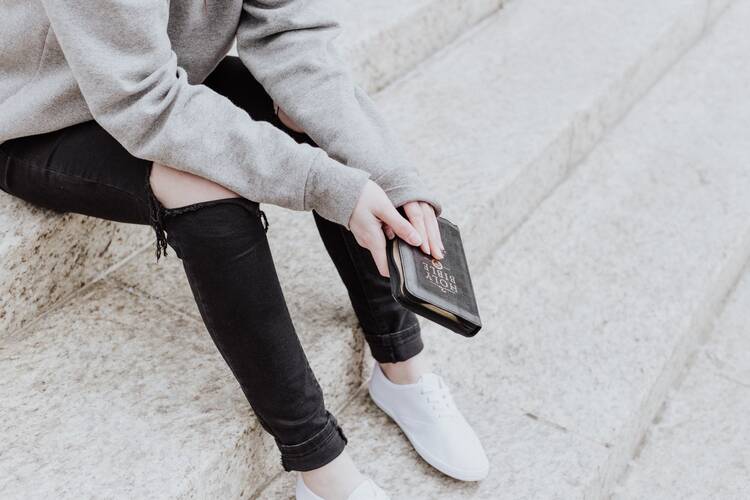 For the past year, there has been one prayer on my heart.

It’s a popular Marian devotion, often hidden in the backs of daily prayer missalettes or within the “Classics” heading of a decades-old prayer book: the Memorare.

The other week during a lunch break, I made a quick trip to St. Patrick’s Cathedral down the street from my office for a humbling afternoon confession.

“What’s been your favorite prayer lately?” the priest in the confessional asked after we had chatted about sin and practical ways to fight it. I told him, and it became my penance. I have been silently praying the Memorare pretty much every time I see an image or shrine of the Virgin Mary, at a church, in someone’s home or even online. I think of the prayer whenever I touch the small, golden Miraculous Medal I sometimes wear around my neck. Remember, O Most Gracious Virgin Mary, That never was it known That anyone who fled to your protection, Implored your help, Or sought your intercession was left unaided. Inspired by this confidence, I fly unto you, O Virgin of Virgins, my Mother. To you do I come, Before you I stand, sinful and sorrowful. O Mother of the Word Incarnate, Despise not my petitions, But in your mercy hear and answer me. Amen.

I have heard the Memorare in formal, spiritual settings. But I never really heard it gushed over by people in my generation.

As a kid, I first discovered the Memorare through my mom, who has it memorized by heart. Over the years I would recite it silently, not really knowing what I was saying or what it meant.

Though its true author is reportedly unknown, the Memorare is frequently ascribed to French abbot St. Bernard of Clairvaux, who was honored by Pope Pius VIII as a “Doctor of the Church.” The devotion was later popularized by Father Claude Bernard in the 17th century and was originally part of a longer 12th-century Latin prayer “Ad sanctitatis tuae pedes, dulcissima Virgo Maria” (“At your holy feet, most sweet Virgin Mary”). Father Bernard fervently recited the prayer after being cured of a life-threatening illness. Recognizing its power, he shortened, translated and distributed the prayer worldwide, reminding the faithful of the importance of lifelong devotion to the Blessed Virgin Mary.

Even St. Francis de Sales and St. Teresa of Calcutta are said to have prayed the Memorare daily, for protection or a fast miracle. (St. Teresa would recite it sometimes as an “express novena”—it always worked.)

“Inspired by this confidence, I fly unto you, O Virgin of Virgins, my mother.”

Over the years, I heard the Memorare in formal, spiritual settings, often said in parish and community groups my parents attended. But I never really heard it prayed or gushed over by people in my generation. Most of my peers didn’t know it existed.

One night about a year ago, I had a personal encounter with the Memorare. I was feeling particularly restless and found myself flipping through the pages in one of my mom’s prayer books. The brevity and succinctness of the prayer caught my eye; I like to think Mama Mary was hovering over my shoulder, pointing me in the right direction.

The line that struck me most was “Inspired by this confidence, I fly unto you, O Virgin of Virgins, my mother.” Meekly, I called for her intercession in my deep restlessness.

Almost instantly, I felt a rush of peace, something like a miracle. It was further confirmation, and consolation, that someone was listening to my fervent prayers and petitions.

I’ve learned over time that both gratitude and grace can help fight the demons of anxiety.

As a young Catholic woman working in media, conveniently in the middle of her “quarter-life crisis,” living and attending school in one of the most costly cities in the world, I worry a lot. Like, a lot. I often compare myself to other thriving 20-somethings who are successful or financially stable. Those who seem to have their futures figured out, their whole act together (at least on social media). It’s like watching a movie trailer; you only see the good stuff.

Anxiety is a daily battle, a constant negative voice in your head telling you you’re not good enough.

This anxiety has lived with me through many trials, from lost friendships and job searches to the fear of failure and simply being “enough.” She creeps into my desires to be seen and my need to be needed. Like many young adults, I keep her masked with a friendly smile and an ever-packed to-do list.

But I’ve learned over time that both gratitude and grace can help fight the demons of anxiety. The Memorare is my shield. It inspires me to be confident, to have faith in everything that I do and to remember my own worth.

Said with purpose and conviction, the Memorare can remind 20-somethings that we are not alone in our restlessness.

For a centuries-old prayer, the Memorare is short and simple, all the better to memorize. It is a powerful, relatable prayer for young adults like myself, many of whom live with daily sins or face increasing familial, financial or societal pressure, as well as a crippling fear of The Future.

The Memorare reminds us to be humble, asking for the merciful intercession of Mary our Mother, who always dwells in our hearts—healing, interceding and inspiring confidence—if we just let her in.

Why do we let good manners get in the way of prayer?
Zac Davis

Panicking with Grace: A Spirituality for Whatever's Next
Teresa Donnellan

Like Mary, I aspire to live confidently, with a grateful, forgiving and servant heart and to let God lead me where he wants me. To let go of the fear and say yes, even and especially when I don’t feel it. My story is just getting started.

Now, I pray the Memorare devotion almost daily for protection, mostly on a visit to the chapel or during my everyday commute. My mom and I also pray it weekly when we FaceTime or talk on the phone, usually right before we end our conversation. Though miles and time zones apart, we recite the words together, with graces loud and clear as ever. I know that it means so much to my mom that we could share in this gift together.

St. Augustine, a lifelong devotee of the Virgin Mary, once wrote, “Our hearts are restless until they rest in you.”

Said with purpose and conviction, the Memorare can remind 20-somethings that we are not alone in our restlessness. Knowing God’s mercy, with the powerful aid of Mary, is the peace and freedom so many of us long for.

Anxiety may still be an unwanted guest in my head at times, but she does not live here. So this is what it’s like to be free.

Allyson, this prayer helped me through many times in college, in my 20s, with my children in my 30s and 40s, and 50s. Now at 60, it still gives me peace and hope and the same feeling you felt. That I am not alone. I have taught this prayer to my children and hope as they are adults they continue to pray it. I shared your article on facebook. To me, I was led to it by Mama Mary as well. Peace and love!

This is a fascinating prayer. Elizabeth Johnson, a prominent theologian and expert on Mary, says that the Memorare is a very ancient prayer, originally one addressed to Artemis. A careful reading of the prayer supports this in that it is not Christocentric. The words "Mother of the Word Incarnate" near the end, and the word "Mary" at the beginning, were added. Artemis was a virgin goddess highly revered in Ephesus, a city long associated with where Mary spent her last days. I love this aspect of the prayer for some reason--intriguing bridge-building between different religions. It is a very unique prayer. Also, I think Augustine said "our hearts are restless until they rest in thee about God, not Mary. Thanks for a very thought=provoking article. A prayer for millenials and also the rest of us, as well.

A committee of the US Bishops Committee on Doctrine recently raised a series of red flags about Sister Elizabeth Johnson’s most recent book
Quest for the Living God: Mapping frontiers in the Theology of God.
The committee suggested that the book should not be in used in Catholic schools and universities because it conflicts with church doctrine: the mother of our Lord and Saviour Jesus Christ is not a goddess.

I love the lines ; to thee do we cry poor banished children of Eve …, and; turn then most gracious advocate thine eyes of mercy towards us, and the line; and after this , our exile, show unto us the blessed fruit of thy womb, Jesus .
I also like the biblical prayer ; speak lord your servant is listening, you have the gift of ever lasting life. And the biblical prayer; I will drink of the cup of salvation, and go to the house of the lord. And also ;I lift up my eyes to the mountain from whence will my help come? My help comes from the Lord, who made heaven and earth. The lord is my keeper , he does not sleep; by day the sun will not smite me, nor the moon by night. And the song/prayer; let the lord come with us, if we have found favor in His eyes, it is true that we are sinners but you pray for us and we shall be His inheritance; Mary; you are the Arc that carries the Covenant , the place of the dwelling of the Lord , the sanctuary of His Shekinah.