Panicking with Grace: A Spirituality for Whatever's Next 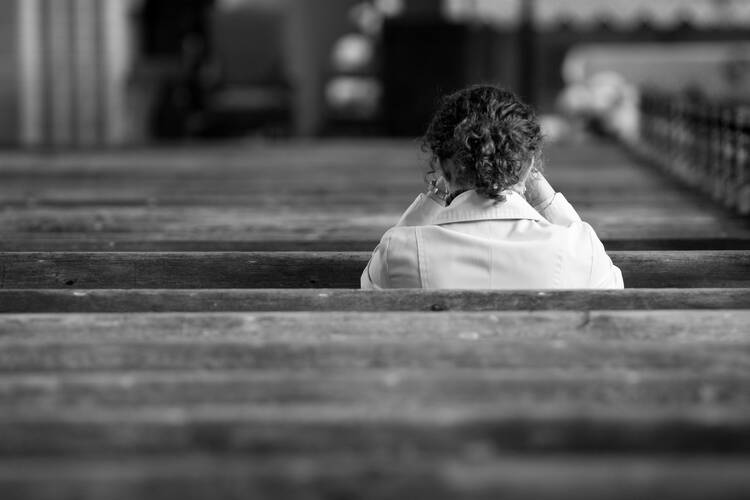 I want this period of my life to be over because in this period I don’t know what I’m doing. Having graduated college a year ago without an inkling of a career path, I am often visited by fun new friends like crippling anxiety and existential dread. The media push articles about the growing trend of extended adolescence and the waning likelihood of millennials achieving the American Dream. Naturally, I am seeking a resolution to my ordinary, yet nerve-wracking search for purpose.

Millennials are living at home longer, getting married later and generally taking more time than our predecessors to become independent adults. Psychologist Jeffrey Jensen Arnett of Clark University argues for the recognition of a new stage of psychological development, which he calls “emerging adulthood.”

It would be easy to assume young people in this stage are failing in some way; that millennials procrastinating from making life decisions are lazy, coddled and selfish. But rather than allowing this period of “emerging adulthood” or “extended adolescence” to be a source of insecurity, I am beginning to embrace it as an opportunity to practice careful discernment and to develop a mature prayer life.

It is difficult to bring oneself to prayer when one feels lost. Inevitably, I have begun comparing myself to my (seemingly thousands of) friends with their acts together. While studying at Georgetown University, I was fortunate to meet many great Catholics who are now following clear vocations. Their alluring certitude made me wonder: What are they doing that I could try? I reached out to a few of them to ask about their prayer and discernment.

I am often visited by fun new friends like crippling anxiety and existential dread.

Eileen and Pat got married last October in Boston, and Christian is in his second year at the Jesuit novitiate in the Northeast Province. They are all a year older than I am, and they have worked hard to develop their prayer lives. They are particularly knowledgeable about discernment, the key to Ignatian spirituality.

I met Eileen during the spring of my freshman year. I had joined the pro-life group on campus and signed up to staff a table for the group a couple days each week. Eileen stopped by the table with a messy bun and a big purse full of books and Tupperware. She had a unique ability to appear frazzled and calm at the same time. Even though she had a lot going on, she took the time to stop by and welcome me into the club.

I met Pat the next year when we shared a shift together at a commons desk in one of the dorms. Our early interactions were just half-joking insults about each other, spurred by a joke about introverts bonding better over insults than small talk. I guess it worked.

Struggling in prayer is a personal, even embarrassing, topic, but I have seen Eileen do some awkward interpretive dance to Avril Lavigne’s “Sk8tr Boi” and Pat and Christian each shave only half of their beards before going to a party. And they have seen me dye my hair blue because I lost a bet. So, lucky for me, we are past the point of feeling silly in front of each other. I feel comfortable talking to them about anything. Why not prayer?

It is no surprise that young people need to spend time in prayer to discern their true vocation. Christian pointed out that even Jesus did not begin his active ministry until about the age of 30 (and even then it was upon the insistence of his mother.)

“Like many young people in the church today, Jesus needed to discern how to proclaim the coming of the Kingdom most effectively,” explained Christian, the Jesuit novice. “He turns to prayer in order to know the Father’s will and find strength to complete it.”

Young people in extended adolescence can likewise discern their vocations in prayer. Eileen suggested that a period of uncertainty may be a great time to begin developing your relationship with God: “It’s actually been really helpful to me to look at prayer through the lens of discernment, because when I feel like I need to come to a decision or understand something or shake something up, it puts pressure on me to be more intentional about prayer.”

The primary way to go about Ignatian discernment is with the examen. Eileen, Pat and Christian each recommended it.

The examen is a conversational prayer that usually takes about 15 minutes. You sit with God, going through the events of your day, considering your feelings and reactions, answering questions like: Where did you feel most alive today? What was difficult for you to handle? What do you hope for tomorrow?

“A big part of Ignatian prayer considers how God acts in us through our desires, emotions and spirit,” said Christian. “One of the biggest ways in which this style of prayer affects my life is in seeking affirmation of my vocation in the novitiate. In this discernment, I bring to the Lord deep questions, like ‘Am I where you need me to be? Is this Jesuit vocation the best way for me to be at the service of the Gospel?’”

Regularly praying the examen can be a challenge. If you have trouble getting into a routine, Eileen suggests a sort of check-in version of the prayer: “After one event, sit with just that thing. Think about the parts of it that were good and bad, how it made you feel and whether or not it brought you closer to God or provided a sense of peace and fulfillment.”

Ultimately, the examen can help you live more intentionally. “This prayer has been particularly helpful in making decisions,” Pat explained, “because it forces me to really think about what I experience, what I am doing each day, who I am as a person and what role God is playing in all of this.”

If you are like me, a member of the hopelessly analytical faithful, and you want to learn more about the examen, I suggest reading Jim Manney’s book, A Simple, Life-Changing Prayer: Discovering the Power of St. Ignatius Loyola’s Examen.

When asked if they could offer advice to millennials like me, my friends gave simple advice: Give it a try, and be patient.

“My biggest piece of advice would be to try it simply because it’s so life-changing,” said Eileen.

Pat added: “Whether it is chatting about my day, pleading for help, yelling about something that hurt me or just sitting, I pray when I intentionally make God a part of my day. Even if I can't think of anything else to say, which is often, I can always just sit and say: ‘Wow. This is amazing. Thank you!’”

Eileen had an interesting insight: “Nurturing a prayer life is often put off because young people (myself included) want to focus on more transient things—spending time with people, focusing on homework or jobs or working out. And those are great things. You have to do them to build a foundation for the life you want. But I will also say that more important is understanding what the life you want is like, so you can do all of those other things!”

“Take a risk,” suggested Christian. “Go on a retreat. Go on an immersion trip which has interested you in the past. Learn about yourself, your desires, and then you will know more fully where the joy of your true vocation meets the world’s deepest needs.”

“It’s okay for this to be difficult, so remind yourself of that when things aren’t easy,” Eileen advised. (I would add that if you’re struggling with prayer, Karl Rahner’s book Encounters with Silence may be a worthwhile read.)

Pat recalled something that proved to be a great insight for him. “The most frustrating thing that my spiritual director at school ever told me was to be patient,” he said. “I would get so upset each time that he said it, but it was true. It was only when I calmed down and was patient that I was finally able to hear God calling me to spend more time with this friend, Eileen.”

It worked. “Almost three years later, she is now my wife, and I could not be happier that I finally let myself trust in God.”

Beyond religious life and marriage: A look at friendship as vocation
Eve Tushnet

Extended adolescence does not have to be an embarrassing in-between time—a jumble of things happening to you before your “real” adulthood begins. It can be an opportunity to live intentionally and to spend time listening for and exploring your vocation through prayer.

This period of my life is far from over, and the task of shaping my adult life is still daunting. But I am optimistic that with the grace of God I will be able to recognize what God intends for me. I will do my best to remember Pierre Teilhard de Chardin’s instruction in his poem “Patient Trust”:

Give our Lord the benefit of believing
that his hand is leading you,
and accept the anxiety of feeling yourself
in suspense and incomplete.

Editor's Note: After writing this article, Teresa accepted a position as an editorial assistant at SmartBrief, Inc. in Washington, D.C.

Teresa Donnellan is an O'Hare fellow at America.

"A period of uncertainty may be a great time to begin developing your relationship with God." I believe that's true, actually foundationally true and wise. I consider myself to be one of the many who are able to develop relationships with God because of periods of uncertainty, never ending it seems.

Uncertainty promotes a constant, and resolute search for the Mysterious One, God, Who is ever eager to play the child's game of "Hide and Seek," wherein either He hides as we seek, or we hide as He seeks. As Scripture points out, God enjoys "playing with the children of men." Yes, God is playful!

What is the end result of this heavenly game? For me, at least, it produces a profound reverence for all things Sacramental. I just love all the Sacraments, wherein God hides Himself. But not just the liturgical Seven. God hides every where in sacramental character ready to be found in all the circumstances of life "instituted by God/Christ to give Grace," providing face to face encounters with God/Christ Who as St. Mother Teresa of Calcutta says, "comes in distressful disguises of human need." One person who grasps this perfectly is Holy Father Pope Francis.