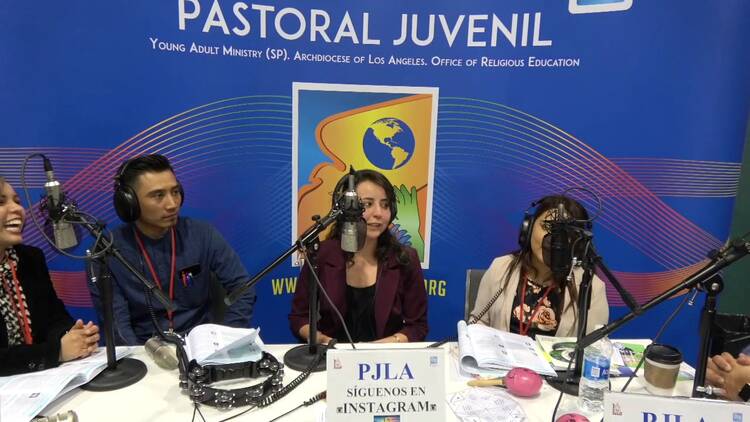 When I first come upon José Julián Garoz in the back of the exhibition hall of the Religious Education Congress, he is in a blue suit, holding a camera and roaming the area around his booth with the focused attention of someone ready to pitch in wherever he is needed.

Before him a group of young adults sit at microphones in suits and skirts interviewing a priest, a beautiful blue backdrop behind them announcing that they are part of Pastoral Juvenil, the Archdiocese of Los Angeles’s ministry for Spanish-speaking young adults. As the four hosts interact with their guest, peers manage the sound mix and monitor the video. The entire group has much the same upbeat, can-do energy of Mr. Garoz; they are a pleasure to watch.

PJLA Radio began 11 years ago. Alberto Embry, the diocesan coordinator of young adult ministry in Spanish, believed the Pastoral Juvenil should be led by its young people. “We want to stay absolutely open to the initiative of the young people in the parishes,” he explains. “My idea is that we build a church together.”

Conversations on PJLA Radio range widely, from the coming Sunday’s scriptures and the upcoming Synod on Young People to interviews and information about upcoming PJLA events.

So when a small group of young adults proposed a radio show, he supported the idea.

Mr. Garoz joined the group about a year later in 2008. He had been brought to the United States from Guatemala when he was 12. Since finishing school he had been studying to be a graphic designer while working full time. “It was hard,” he remembers. Mr. Garoz is also a musician and songwriter invested in his faith; for him PJLA Radio was a natural fit.

Today the show broadcasts via Facebook Live on Pastoral Juvenil’s Facebook page each Friday from 8 to 10 p.m. Conversations on PJLA Radio range widely, from the coming Sunday’s scriptures and the upcoming Synod on Young People to interviews and information about upcoming PJLA events.

The show also goes “on the road” to PJLA concerts and other events; during the Religious Education Congress PJLA aired 10 hours a day, interviewing speakers and young adult participants at the event.

Mr. Garoz believes the radio station offers an experience of community and empowerment to young Latinos, some of whom have only just arrived in the United States. “There are people who come [to the States] and they don’t speak English and they limit themselves because they don’t have documents,” he explains. “Some are alone, they came here at 17; they’ve been here 10 years by themselves...and church was so important where they came from.

[Sign up for Convivir, a new weekly newsletter that highlights the latest news, culture and trends related to Latino Catholics.]

“We all need friends, we all need a family, a place to be, someone to take us in.”

PJLA Radio provides a valuable forum for those experiences, which can vary dramatically. Among both listeners and staff, one can find those who were born and raised in the United States or moved here at a young age and those who are new to the country; those who have papers and those who do not or whose parents do not.

“Even if you come from the same country, you might come from a different town and have a totally different culture,” Mr. Garoz points out. “There are so many different stories.”

With the promise of belonging also comes an invitation to discipleship. “I think the biggest mission we have is to remind them, ‘You have a place here,’” says Mr. Garoz. “’We need you. We have so many things you can help out with.’”

Mr. Embry notes that in addition to religious experts PJLA Radio’s guests can include political candidates and representatives from law enforcement and social justice groups like PETA or Greenpeace. “We have a really wonderful relationship with the police department, the fire department, the emergency department.”

“This is the real evangelization,” he says, “how we are going to put the Word of God into practice in our lives” and to help young people see that “all the problems and all the celebrations of the world are part of the Christian life.”

“We can change the world, but we need [to be] participants.”

As I am finishing this story, I check in with Mr. Garoz again. I find him on the road to Arizona, where he is going to perform at a prayer service. Today his music takes him all over the country.

“It’s so important to remind the youth that we are very useful,” he tells me, thinking about his 10 years with the radio show. “Sometimes we just have to discover it: You’re so useful to God.”

You should listen to the biggest station in Los Angeles. The John and Ken show which is a constant screed against the Roman Catholic Church they constantly rail against the church, the schools, the abuse that they claim is constant, etc. They claim they were responsible for have Cardinal Mahoney removed from the Diocese of Los Angeles. When we send letters to the programs directors no one acknowledges them. There is never an apology nor correction. They drive people away every day as the church in this area grows smaller. There should be an outcry.