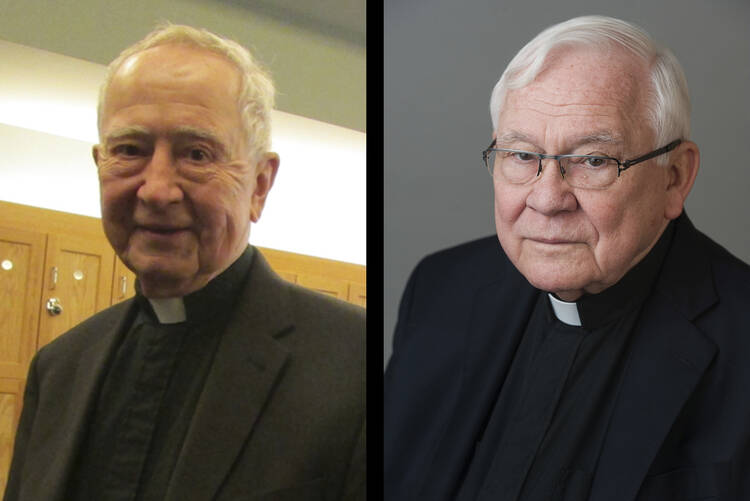 Howard Gray, S.J., a longtime spiritual director and one of the founders of the Jesuit retreat movement, died last week. John W. O’Malley, S.J., his friend for over 70 years, remembered him in this sermon delivered at his funeral, which was held on May 12.

Wishing to justify himself, the lawyer asked, “And who is my neighbor?” Jesus replied: “A man went down from Jerusalem to Jericho and fell among robbers, who stripped him, beat him, and left him for half dead. Then down came a priest who crossed to the other side and hurried along, as did a Levite. Then came a Samaritan, who saw him, was moved with compassion, bent over him, poured oil and wine into his wounds to soothe and disinfect them as best he could, bound them up, probably tearing one of his own garments to do so, and took him to an inn, where he cared for him. Then he told the innkeeper to do the same until he returned, when he would pay whatever the care had cost. With that, Jesus asked, ‘Who do you think was neighbor to that poor man?’ The lawyer replied, ‘The one who showed him compassion.’ Jesus said, ‘Go, and do likewise.’”

This is one of the most familiar stories in the Bible, and even people who have never heard it or read it know what the expression Good Samaritan means. It is the story that Howard Gray requested be read and preached upon at his funeral liturgy. The story of the Good Samaritan is, therefore, Howard’s last word to us. It is his farewell message to us. It is the story he wants us to take to heart and to remember him by.

The story of the Good Samaritan is Howard’s last word to us.

I think Howard would be pleased if we took a clue from the Spiritual Exercises of St. Ignatius and contemplated each of the persons in the story by asking ourselves with which one we identify. Maybe with the smug and self-satisfied lawyer, who could rattle off the right answer to religious questions but did not dare ask himself what the answers might mean for how he lived his life. Maybe with the priest, who hurried along, perhaps to attend an important religious service. Or with the Levite, who had to close a big business deal or maybe just did not care. May it not be with the robbers, whose livelihood came from the exploitation of others.

There is another person in the story—the man who was robbed, stripped, beaten and left for half-dead. The man who was helpless and covered with gaping wounds. The man who was so crushed by the punishment he suffered that he lay there silent, probably only half-aware of the dire condition he was in. A pitiful figure. A man who desperately needed another to bind up his wounds and give him succor.

If the church is a field hospital, I have known a place where the wounded have flocked for many decades. I am speaking, of course, of Howard Gray.

Do you in any way identify with him and maybe bear wounds and need comfort and healing? Perhaps wounds you inflicted upon yourself? And perhaps you even find yourself continuing to inflict them, as if that pattern is a part of you. I do. I identify with that wretched man, and I know that I am not alone in doing so. In fact, I believe that wounded man in some degree, great or small, lives in each of us. But, even if he does not, each of us needs comfort, understanding and encouragement.

Our Holy Father, Pope Francis, calls the church a field hospital. What a beautiful image that is and how consonant with the story of the Good Samaritan. If the church is a field hospital, I have known a place within the church where both the badly wounded and the lightly wounded have flocked for many decades. I am speaking, of course, of Howard Gray.

What an extraordinary life he had as a Jesuit. The day he died the province sent out a little biography that listed the important positions he held, including provincial of the Detroit Province, where he was not only esteemed as provincial but loved as provincial—not a small achievement in the Society of Jesus! Respected and loved, yes, but he was also a fun provincial. The fun part only enhanced the respect and the loved part.

His was a toughness born of love, not of self-righteousness.

What the list of positions does not reveal is how creative Howard was in them, even though he did not choose them himself but accepted them as assignments from superiors. The superiors sometimes placed him in them when the enterprise or institution was in danger and needed a firm, clear-sighted and imaginative leader. I can honestly say that in every instance he left those institutions or enterprises in better shape than when he found them. Even though it cost him dearly, he could be tough when he believed toughness was called for, but it was a toughness born of love, not of self-righteousness.

Howard was, moreover, a key player in the rescue of Jesuit spirituality from the moralism into which it had largely fallen over the course of the centuries and in promoting Ignatian spirituality, whose blossoming we experience today. He was one of the first to promote the individual directed retreat, and he helped establish programs to teach others how to be compassionate and prudent guides for those making such retreats. He opened the programs to lay men and women. Today we take such things for granted, but we need to realize that they constitute a significant turning-point in the history of Christian spirituality.

He was one of the first to promote the individual directed retreat.

That was Howard the public person. Then there was the human being we all knew. There is so much that could be said, but if I say simply that Howard was a deeply affectionate person I have hit upon one of his deepest traits. He loved his sister Marge and considered her his best friend. They spoke on the phone almost every day. He loved his nieces and nephews and their families, and he followed their careers with intensity and concern.

He formed friendships easily and quickly but never superficially. Once his friend, always his friend. He and I were friends for 70 years, since we were teenagers, and I consider his friendship one of the most precious blessings of my life. We shared gossip, of which Howard was a reliable and inexhaustible source. We bantered and teased and feigned indignation at one another’s foibles. You might gather some insight into the quality of our friendship if I tell you that sometimes with me he began a conversation by asking the endearing question, “Do you know what’s wrong with you?”

Howard looked, he saw, he loved. A Jesuit who for years has been engaged in a courageous and difficult ministry wrote me the other day when he heard of Howard’s death: “Nothing prepared me better for the ministry I have been engaged in for over 30 years than the affection Howard gave me and showed me how to extend to others. He was a tender glance of God, empowering us all to be that tender glance in the world.”

That was the gift that drew people to Howard with their darkest secrets, their deepest wounds and their highest hopes. They came to the field hospital he called spiritual direction, and there they found balm for their wounds and comfort for their souls. To that hospital came bishops, university presidents, students, faculty, staff, countless Jesuits, sundry others and at least one cardinal.

Several weeks ago, Howard was at Georgetown University, where he gave a marvelous lecture. In it, he quoted a passage from the spiritual diary of Blessed Peter Faber, one of the founding members of the Society of Jesus along with St. Ignatius:

With great devotion and new depth of feeling, I hoped for and beg this from God, that it be given me to be the servant and minister of Christ the consoler, the minister of Christ the helper, of Christ the healer, the enricher, the strengthener. Thus it would happen that even I might be able through him to help many—to console, liberate, and give them courage...and thus bring help to each and every one of my neighbors whomsoever.

What better description could there be of the life of our beloved Howard, that little guy and that great man. We mourn his loss. But as we turn now to the Eucharist, which is the liturgy of thanksgiving and the sacrament that comforts and strengthens us in our sadness, we ask the Lord to welcome Howard into his kingdom, to embrace him, to kiss him, to put a ring on his finger and the best robe on his shoulders, and then to introduce him to all the angels and saints in that blessed place where the singing and dancing goes on day and night, 24-7, forever and ever, world without end. Amen.

John W. O’Malley, S.J., is University Professor in the theology department at Georgetown University. In 2018 Harvard University Press will publish his history of the First Vatican Council.