The Hispanic Catholic Church in the U.S. is growing, survey confirms 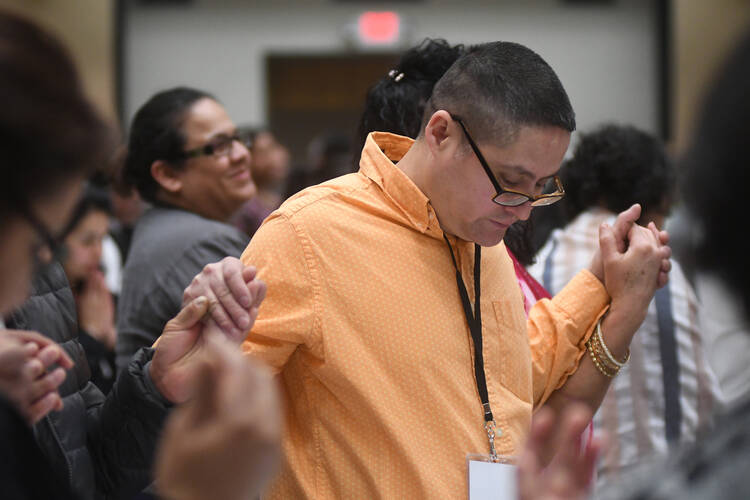 Pedro Narez from St. Gabirel Parish in Hopkins, Minn., in the Archdiocese of St. Paul and Minneapolis prays April 13 during the Region VIII encuentro at Arrowwood Resort and Conference Center in Alexandria, Minn. (CNS photo/Dianne Towalski, The Catholic Spirit)

Most Catholics under 30 are Hispanic, according to a new diocesan-level survey that confirmed many trends within the growing Latino community.

Overall, about 40 percent of U.S. Catholics are Hispanic, according to the survey, which was part of the V Encuentro, or fifth Encuentro, process. Encuentro, which means “Encounter,” is an initiative from the U.S. bishops that seeks to better serve the growing Latin American community and will continue through 2020.

“To some extent the statistics are suggestive of what needs to be done,” said Ken Johnson-Mondragón, who conducted the survey for V Encuentro. “We put this information before the people and say, ‘Where do we go from here?’ There are a thousand different ideas that have come forth, and those will be refined as we go forward to identify the best ideas.”

“When you look at the number of people that are at Mass, the churches are pretty packed,” he said. “The average is like 350 per Mass, but there are many places where there are upwards of 1,000 people attending Mass in Spanish. So it’s the tip of the iceberg of what’s potentially there in terms of Catholics who are Spanish-speaking and are not going to Mass.”

Those numbers demonstrate there is still more work to be done in terms of vocations among U.S.-born Hispanics, according to Hosffman Ospino, associate professor of Hispanic ministry and religious education at Boston College. “V Encuentro is already pushing us into this conversation,” he said. “How can we engage the U.S.-born Latino population, for both priesthood and religious life?”

The number of Hispanic priests is not keeping pace with the growing community,  the survey reports.

Some dioceses are doing little in Hispanic outreach despite Hispanics making up more than 30 percent of their population, Mr. Ospino said. While most Catholic children are Hispanic, the survey found 17.2 percent of K-8 and 14.6 percent of 9-12 Catholic school students are Hispanic.

Mr. Ospino said there is a “sincere desire” to serve the Latino community. The Encuentro process is helping the church identify where it can improve. The consultation begins at the parish level, then moves to diocesan gatherings, to regional gatherings and finally to a national gathering this September in Grapevine, Tex.

Infographic: Few Hispanics among men to be ordained as priests in 2018
J.D. Long-García

“At the end of the day, no one can claim naiveté,” Mr. Ospino said. “Now we know and we are compelled to respond.”

Consultation is hard work, Mr. Johnson-Mondragón said, but the biggest challenge will be implementing changes.

“People have been touched through the outreach of another person who has come back to the church,” he said. “People have come to the realization that sharing their faith is wonderful and that has changed their lives. People are on fire to be missionary disciples. But in the context of 30 million Hispanic Catholics, maybe 80-85 percent of whom don’t regularly go to church, we have a lot of work to do.”

I enjoyed taking Spanish courses in high school and college, but because of my lack of contact with Spanish -speaking people, my knowledge of the language has steadily diminished over the years. In the nursing home/rehabilitation center where I live, one of my roommates has family in Puerto Rico and speaks both English and Spanish. I try to reach out to him in his native language, and do my best to both assist him with his personal needs, and give a good example as an imperfect Catholic of watching Mass on television every Sunday. I also attend a weekly Sunday Communion Service, as well as a monthly Mass. I pray that both as individuals and as a Church that we will do more to evangelize among our Hispanic brothers and sisters, and that the Church will offer more Masses in Spanish. But it seems that encouraging vocations to the priesthood is crucial.