Infographic: Few Hispanics among men to be ordained as priests in 2018 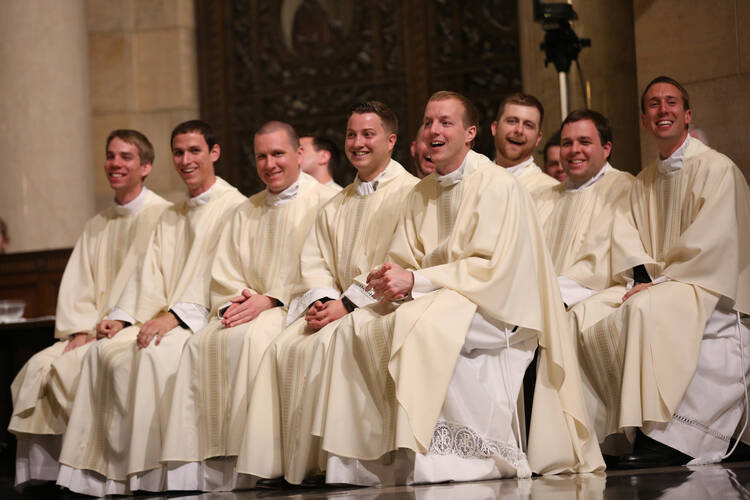 Ten priests at the conclusion of their ordination Mass on May 27, 2017, at the Cathedral of St. Paul in St. Paul, Minn. (CNS photo/Dave Hrbacek, The Catholic Spirit)

Only 20 percent of the respondents to a survey of men scheduled to be ordained as priests this year are Hispanic, according to the Center for Applied Research in the Apostolate. The figure adds to concern about the low percentages of Hispanics entering the priesthood, enrolling in seminaries and entering religious orders. Among seminarians in the 2017-18 academic year, 15 percent identified as Hispanic, lower than the 34 percent of the nation’s Catholic population who are Hispanic and far less than the 52 percent of U.S. Catholics under 30 who are Hispanic.

The Rev. Jorge Torres, secretary of the National Conference of Diocesan Vocation Directors, believes the church can overcome the disparity by creating more opportunities for evangelization and catechesis within Hispanic communities.

“We need to be more involved with U.S.-born Hispanics—not just administering sacraments, as beautiful as they are,” he said. “We need to find a different path to help them see how they want to serve God and their neighbors.” Father Torres is the vocations director for the Diocese of Orlando, Fla., where 50 percent of seminarians are Hispanic.

Many young Hispanics feel called to provide for their families, which can be an obstacle to discernment, Father Torres said, or cannot afford the college education needed for religious vocations. He said that increasing Hispanic enrollment in higher education is an important goal so “academics won’t be a stumbling block” to the “men and women who want to serve God.”

“It’s an incredible task,” he said. “but the more leadership is open to the Latino community, the more [Latinos] will respond.”

According to CARA, overall seminary enrollment has remained steady: There are 3,369 students at the post-baccalaureate level of priestly formation in 2017-18, reports the Georgetown University-based research center, a slight decrease of 36 from the previous year—but far below the enrollment of 8,159 in 1967-68, which has been unequaled since CARA began compiling data that year.

Infographic sources: “The Class of 2018: Survey of Ordinands to the Priesthood,” Center for the Applied Research in the Apostolate; data on postulants and novices at 768 religious institutions from “Women and Men Entering Religious Life: The Entrance Class of 2017,” CARA; seminary data from “Catholic Ministry Formation Enrollment: Statistical Overview for 2017-2018,” CARA; data on U.S. Catholic population from “A Closer Look at Catholic America” (2015), Pew Research Center, and “America’s Changing Religious Identity” (2017), PRRI.