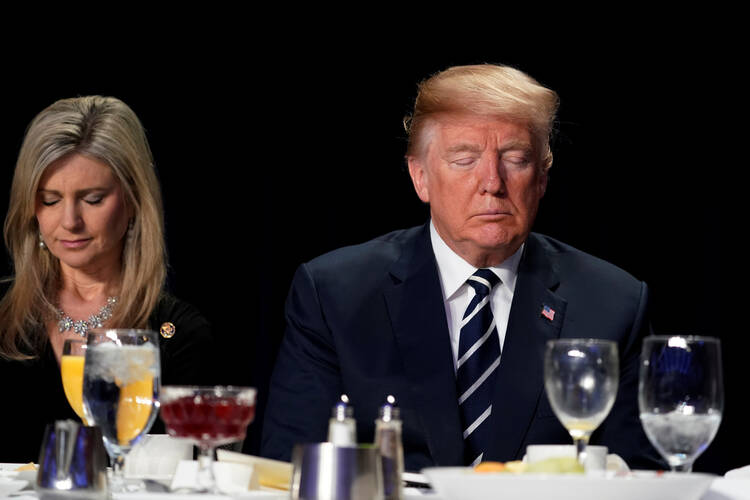 Cardinal Donald Wuerl will be among a number of faith leaders on hand at the White House today, offering a prayer as part of the National Day of Prayer. During that event, President Donald Trump is expected to announce the creation of a new office for faith-based initiatives, restoring programs that existed under his two predecessors but that have largely languished under Mr. Trump.

The event comes just a day after the president’s lawyer acknowledged on national television that Mr. Trump used his own money to buy the silence of an adult film actress over a sexual encounter.

News of the executive order was first reported by Religion News Service.

Cardinal Donald Wuerl will be among a number of faith leaders on hand.

Mr. Trump is scheduled to sign an executive order on Thursday, “to ensure that the faith-based and community organizations that form the bedrock of our society have strong advocates in the White House and throughout the Federal Government,” a White House document reads.

The White House said those working on the initiative will provide policy recommendations from faith-based and community programs on “more effective solutions to poverty,” and inform the administration of “any failures of the executive branch to comply with religious liberty protections under law.”

This will not be the first time Cardinal Wuerl has been at the White House for a signing ceremony. He was there last year when Mr. Trump signed an executive order that the White House said was meant to protect religious liberty, though critics said at the time it was a toothless order. The cardinal was joined then by the president of the U.S. Conference of Catholic Bishops, Cardinal Daniel DiNardo, and members of the Little Sisters of the Poor, a group of Catholic sisters who were engaged in a years-long legal battle with the Obama administration over the so-called contraception mandate.

Mr. Trump’s creation of the White House Faith and Opportunity Initiative follows the initiatives of previous administrations that created similarly named offices to foster partnerships between the government and religious organizations.

President Obama launched the Office of Faith-based and Neighborhood Partnerships, whose work ranged from fighting the Ebola and Zika viruses to feeding school children nutritious meals in the summertime.

That office, along with similar ones in 13 federal agencies, followed President George W. Bush’s Office of Faith-Based and Community Initiatives. The White House said agencies and executive departments that do not have such offices will have a designated liaison to the new initiative.

If I remember correctly the original President to utter the words faith-based groups and I think included it in his idea of a thousand points of light was President George H.W. Bush.

The original faith based initiative added a layer of bureaucracy of faith oversight to non-profit funding without funding; thus cutting millions from service agencies to the poor in every state. Does this aim to do the same? Or will there be a new way to add paper shuffling oversight to those who want to feed the poor, clothe the naked......

I resent that Cardinal Wuerl shows up for these events.

First, I thoroughly oppose any mixing of religion in the national agenda. As a Church we promoted such too often in too many European venues, to great detriment to too many of the citizens of those countries, especially those of other faiths or none!

Second, though dressed in a black suit, a cardinal's red is still envisioned when Wuerl is identified as "Cardinal." He gives a veneer of legitimacy to an exposed fraud, liar, and fornicator.

Finally, in case anyone makes reference to Trump's meeting with the Pope, popes unfortunately meet all kinds of frauds, liars, and fornicators in their capacity as heads of state. Wuerl is solely a "religious" leader, and like so many of the Evangelical leaders surrounding Trump, sells his dignity and position for a mess of pottage, though I am hard-pressed to figure out what is of so much value down the line for doing so.

I am embarrassed for Catholics in the nation that Wuerl was present. He could have sent some unknown monsignor to represent him.

One more thought....regarding faith-based initiatives by the government: so many of the churches have glommed on to the idea because the charitable giving in their congregations has diminished considerably, due both to the economic uncertainty of their congregants and the loss of people in the pews.