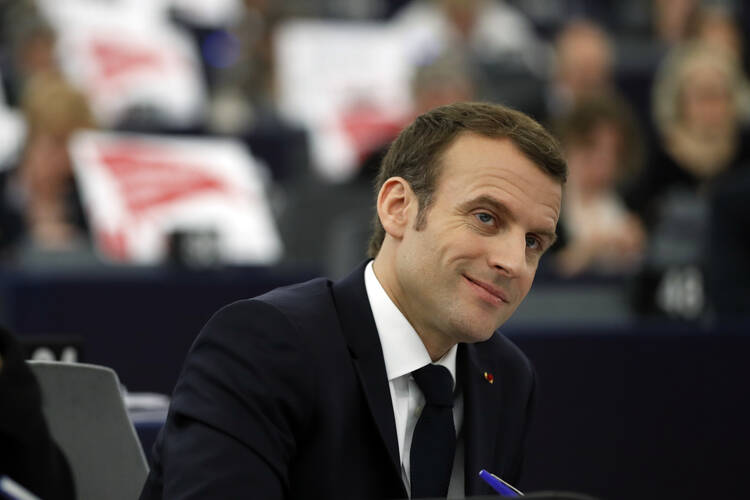 Call it the “I have understood you” style of political rhetoric. To get the idea, bring your mind back to the long-ago days of 2008, when the chattering class in the United States projected all its hopes on one Senator Barack Obama. He was a star because it was thought he could shift the nation’s political center of gravity decisively to the left, and he was a star because he supposedly could transcend partisan divisions. He was progressive, moderate and even conservative all at once, and many right-of-center types swooned over his ability to phrase conservative arguments the way conservatives themselves would make them.

The French leader Emmanuel Macron, a perpetual “A” student who rose to the top of fields like investment banking as a beloved protégé of senior mentors, then became a politician who was progressive one day and conservative the next, may be the best practitioner of this style since the 44th president of the United States.

And it is powerful, if you can pull it off. The human desire to feel listened to and understood is deep. If you can simply repeat back to someone what they think and believe, and do it with feeling, they will come away with a strong sense that you agree with them, even though you have not said so at all. It’s like a Jedi mind trick.

This ability is probably the best explanation for President Macron’s recent speech to Catholic authorities at the Collège des Bernardins, a rhetorical tour de force that said very little while appearing to say very much.

President Macron’s speech at the Collège des Bernardins was a rhetorical tour de force that said very little while appearing to say very much.

The prominent Catholic blogger Erwan Le Morhedec summed it up nicely: “Emmanuel Macron told Catholics, in strong enough terms, that he recognizes their contribution to the life of the country, that he hears their questions and takes them into account, but that he doesn't feel the need to give them the answers they’re hoping for, whether on migrants or bioethics. Symbolically, it’s a lot; concretely, it’s not much.”

Mr. Macron is highly popular with the Catholic electorate in France, which tends to be older, more educated and more well-off, just like his political base overall. He looks the part of the perfect son-in-law every well-to-do Catholic family would like to have. Meanwhile, French Catholics are on the defensive even as they sense their numbers and influence are growing; they feel the unrelenting hostility of the culture, and they crave recognition in an officially secular society that disdains them.

Thus their lovefest with Mr. Macron. He gave a beautiful speech, and he gored many rhetorical sacred cows. He called for knitting back the frayed links between church and state. (“How can this be done when there have been no such links since 1905?” thundered the secularist pundit Henri Pena-Ruiz, referring to the year when the law mandating separation of church and state passed. But while that law removed public funding for most church activities, the church has always been active in the French public square.) He called for a “dialogue in truth” with the church, a dog whistle to make every Ratzinger-loving Catholic’s ear perk up and tail wag.

Mr. Macron called for knitting back the frayed links between church and state.

Indeed, the speech by the former philosophy graduate student, once an assistant to the Christian philosopher Paul Ricoeur, was as rich in erudite references as a Benedict XVI encyclical, name-checking well-known thinkers like Henri de Lubac, Simone Weil and Emmanuel Mounier, but also the church father Gregory of Nanzianzus and the somewhat obscure 20th-century Catholic poet Jean Grosjean. Mr. Macron also endorsed Blaise Pascal’s quote that the church is “worth venerating because it has known men well.” Referencing a document by the Conference of French Bishops, he joked that he might sue for copyright infringement, so close was the bishops’ statement to his own views. If he could have added heart emojis to his speech, he would have.

Mr. Macron’s lavish praise for Catholic contributions to French public life were virtually unprecedented given the French dogma of laïcité. Attacking the notion that it was either possible or desirable for religious believers to keep their faith private, he started reciting the names of French Catholic statesmen who saw their faith and their engagement in public life as one and the same. He went on to mention Colonel Arnaud Beltrame, a police officer who, this March, gave up his life in exchange for jihadi-held hostages, and whose sacrifice moved the entire nation.

Mr. Macron’s lavish praise for Catholic contributions to French public life were virtually unprecedented given the French dogma of laïcité.

Was this selfless act, he asked rhetorically, prompted by his belief in “military service,” his “fidelity” to republican values, or his “burning Catholic faith”? The question, he went on, is meaningless, because those threads “are so tightly interwoven that it is impossible to pick them apart,” nor should one try, for “in this heroic act, it is the very truth of man, in all its complexity, that disclosed itself.” He went on to deplore that “this country can be so distrustful of religion,” when “the link between Catholicism and the French Nation is indestructible.” Given the prevailing notion in France that faith should be strictly private and that politicians should ever-watchingly maintain the line between private faith and public square, this was quite a salvo.

Mr. Macron not only recognized the contributions of the church in public life and social works, but also—incredibly for a French president—called for more of it, admonishing Catholics against merely “standing on the threshold” of the public square. He praised Catholic theology and philosophy as a bulwark against what he described as a creeping “relativism” and “nihilism” that threatens French society. And in a country where opposition to abortion is seen roughly in the same way that Ku Klux Klan membership is seen in the United States, he even praised the church’s defense of “the unborn child,” as well as of “those who have reached the end of life, of refugees who have lost everything,” waxing lyrical about a moral doctrine that calls for protecting all life “in its nakedness and absolute vulnerability.”

For French Catholics, the political future has more questions than answers
Pascal-Emmanuel Gobry

Amid the rhetorical flourishes of the speech, you could forget that Mr. Macron has done nothing to change the status quo on religious liberty or shown any interest in doing so. (A few days later, in a TV interview, he reaffirmed his support for France’s unjust ban on the Islamic veil and other “religious symbols” in public schools.) In particular, Mr. Macron addressed two bills he supports that received the most criticism from Catholic bishops: one making it much easier for authorities to detain and expel undocumented immigrants, and an upcoming bill on “bioethics,” which is sure to further liberalize things like euthanasia, embryo-destructive in vitro fertilization and, perhaps, surrogate pregnancy. Mr. Macron was so effusive in his praise of Catholics’ contribution to those debates that it was easy to miss that he also politely declined to change his position on any of these issues.

Mr. Macron wants the Catholic vote, which the conservative Republican Party, which he sees as his biggest threat, is courting heavily. For this, he is willing to offer lots of pats on the head and very few policy concessions. Given Catholic sympathy for him personally, our craving for public approval and the lack of formation of most Catholics on thorny issues like bioethics, it may well be enough.

He has understood us, indeed.

Pascal-Emmanuel Gobry, who lives in Paris, is a contributing writer to America and a fellow at the Ethics and Public Policy Center in Washington, D.C.

For two decades my wife and I have been visiting FR once or twice a year, and my first visit was over 50 years ago In spite of my murmurred protestations on Sunday morning, mamselle is always able to find an operating Catholic Church in any remote spot of L'Hexagone..

My anecdotal observation is that church attendance has increased quite a bit since 1997. Not only this, on many occasions our midwestern butchering of French musical liturgy and sprakking English at the "Kiss of Peace" has resulted in several invitations to join families after mass.

The "first daughter" of mother church, now prodigal, wants to find her way back. Looking forward to seeing you at St. Honore d'eylau.

Perhaps one could better Compare Macron's courting of Catholics with Bill Clinton's courting of blacks (He was called ""the first black President"), while cutting welfare, initiating the mass incarcelation of blacks in the name of the war on drugs, acting only rhetorically on Aids, by responding in the worst possible way to the genocide in Rwanda so as to unchain the horrors of war in the Congo, and cementing the Reign of Institutionalized Abortion in America and in the world, an Institutionalized Abortion Machine aimed at Black America (not to mention Clintons's sending of Ricky Ray Rector. self-lobotimized, to execution for electoral reasons, as recorded by Christopher Hitchens). All this while giving the impression of "hearing" black America.

I am not sure what Obama did to court conservatives. He certainly did a lot to present himself as rational and reasonable which only infuriated the racist right. Perhaps he was courting a certain kind of conservative by his tightness with Wall Street, and by his cerebrally ruthless way of conducting drone warfare.