How Leonardo da Vinci painted us all into ‘The Last Supper’

How Leonardo da Vinci painted us all into ‘The Last Supper’ 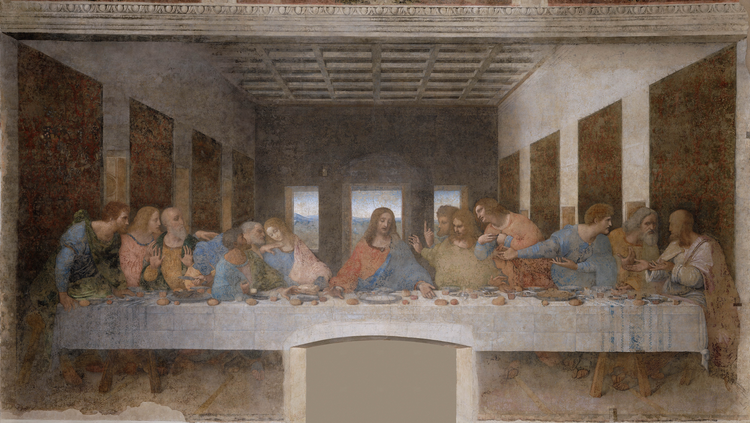 There are two things that everyone should know about the paintings of Leonardo da Vinci. They help you to appreciate both his genius and his masterpieces.

First, Leonardo did not paint in lines. He did not add color to line sketches. The Florentine master had realized that there are no lines in nature. The human mind imposes them, as it notices sensory changes. Nature does not present a border line between the window and the window sill. That is how our mind organizes our perceptions, which is fortunate because otherwise all that we could see would be a rather meaningless mush, much like the vision of a newborn infant or a lower animal.

If you look closely at a painting by Leonardo, you will see that its colors overlap. One gradually gives way to another, so that they again form a line in our mind. But on the canvas itself there is an intermingling. We call this technique sfumatura, after the Italian for “smoky.”

There are two things that everyone should know about the paintings of Leonardo da Vinci.

The other essential characteristic of Leonardo’s art is that he did not believe that there were lines in time either. One moment constantly bleeds into another. It is only later, in memory and narrative, that we distill them into discrete sequences.

Now you are ready to appreciate, in a new way, a picture we have all seen. It is the most reproduced work of Leonardo’s Christian art, perhaps of all Christian art: “The Last Supper.”

Without a copy of the painting in front of you, you cannot appreciate the physical sfumatura of the colors, but narrative can preach the Gospel by relating its emotional sfumatura.

Leonardo was a genius in physically depicting psychological emotions, and he has chosen to paint the pivot in the narrative of the Last Supper, the moment that Jesus announces that his betrayer is with him at table.

Leonardo chose to paint the moment that Jesus announces that his betrayer is with him at table.

First, notice that Leonardo has imposed order on the group of 13 by gathering them into pairs of three, with Christ in the center. He is going to move us through time itself, if we begin on the far left where Bartholomew, James the Minor and Andrew are, as Leonardo biographer Walter Isaacson writes, “all still showing the immediate reaction of surprise at Jesus’ announcement. Bartholomew, alert and tough, is in the process of leaping to his feet, ‘about to rise, his head forward,’ as Leonardo wrote.”

The second trio from the left is Judas, Peter, and John. Dark and ugly and hook-nosed, Judas clutches in his right hand the bag of silver he has been given for promising to betray Jesus, whose words he knows are directed at him. He rears back, knocking over a salt cellar (which is clearly visible in the early copies but not the current painting) in a gesture that becomes notorious. He leans away from Jesus and is painted in shadow. Even as his body recoils and twists, his left hand reaches for the incriminating bread that he and Jesus will share....

Peter is pugnacious and agitated, elbowing forward in indignation. “Who is it of whom he speaks?” he asks. He seems ready to take action. In his right hand is a long knife; he would, later that evening, slice off the ear of a servant of the high priest while trying to protect Jesus from the mob that came to arrest him.

By contrast, John is quiet, knowing that he is not suspect; he seems saddened by yet resigned to what he knows cannot be prevented. Traditionally, John is shown asleep or lying on Jesus’ breast. Leonardo shows him a few seconds later, after Jesus’ pronouncement, wilting sadly.

“The Last Supper” is a single image, but it reads or can be viewed as a moment-by-moment emotional narrative, one that even foreshadows moments yet to come. Finally, we come to the center.

Jesus, sitting alone in the center of The Last Supper, his mouth still slightly open, has finished making his pronouncement. The expressions of the other figures are intense, almost exaggerated, as if they are players in a pageant. But Jesus’ expression is serene and resigned. He looks calm, not agitated.

To the right of Jesus is Thomas, James the Greater and Philip. Thomas raises his right index finger. It is a favorite gesture of Leonardo’s, but this is also the disciple who will soon be commanded to place that same finger into the wounded side of the resurrected Jesus. Leonardo is pulling disparate moments of time together.

Sfumatura. It is when colors run together. And it exists in each of us, who are part faithful, part faithless.

The final trio on the right comprises Matthew, Thaddeus and Simon. They are already in a heated discussion about what Jesus may have meant. Look at the cupped right hand of Thaddeus. Leonardo was a master of gestures, but he also knew how to make them mysterious, so that the viewer could become engaged. Is he slapping his own hand as if to say, “I knew it?” Is he jerking his thumb toward Jesus or Judas? The viewer need not feel bad about being confused; in their own ways Matthew and Thaddeus are also confused about what has just occurred, and they are trying to sort it out and turning to Simon for answers. Returning to Jesus, Mr. Isaacson writes:

Jesus’ right hand is reaching out to a stemless glass one-third filled with red wine. In a dazzling detail, his little finger is seen through the glass itself. His left hand is palm up, gesturing to another piece of bread, which he gazes at with downcast eyes....

Did the Christ Child know his crucifixion was coming?
Terrance Klein

Small wonder that Leonardo’s is the most famous painting of the Last Supper. All of us are in it! Because, have not all of us betrayed the Lord, even though we eat with him at table? And aren’t we all easily agitated at new moments on our journey, wondering what the Lord could possibly be accomplishing now? Aren’t we prone to take matters, even knives, into our own hands because we think that we know what must be done? Yet, like John, at times of deep intimacy with the Lord, aren’t we given the grace to accept all that must come?

And then there is the Lord. Focused, at peace, pointing to the sacrament. With eyes of faith, one can look through the outward species and see the true body and blood of Christ. His finger is visible through the glass.

Sfumatura. It is when colors run together. It is when moments collide. And it exists in each and every one of us, who are part faithful, part faithless. We live in a smoky world, but tonight, Christ, at its center, draws us to himself and gives his very self to us. He does this with great compassion and utter clarity.

Wonderful article, Father. Thank you for sharing it with us. I would love to have a book with short descriptions, such as this one, of famous religious paintings.