Night Shift: How I learned to take homelessness personally

Night Shift: How I learned to take homelessness personally 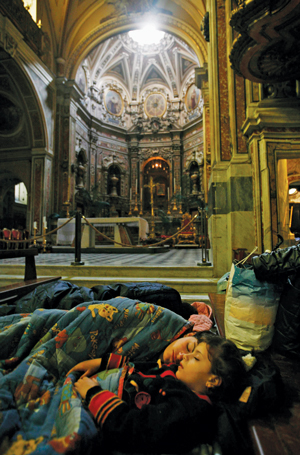 At 2:00 a.m. I was reading the Catechism of the Catholic Church by the red light of the Exit sign burning above my head. I was hoping its stately prose would lull me to sleep—no offense to the wise church fathers who composed the tome—in spite of the less than ideal conditions in which I found myself that Monday morning: in a sleeping bag on a metal cot in the function room of Blessed Sacrament parish in Worcester, Mass.

I was the volunteer overnight chaperone for three homeless families—all single mothers with small children—staying at the parish for a week under the auspices of the local Interfaith Hospitality Network. Different parishes in the network house, feed and care for families for a week at a time for four to six months on average; parish volunteers provide the food and stay with the families during the morning, afternoon and evening hours and overnight.

Family Promise is the umbrella organization that pioneered this innovative approach to assisting homeless families by sharing the burden for their care among an ecumenical network of local parishes. It currently operates 163 networks in more than 40 states. In 2010, the networks assisted nearly 50,000 homeless children and adults. According to the program’s Web site, close to 80 percent of the families that receive shelter in the network eventuallyland long-term housing, an astonishing success rate.

Numbers like these are heartening, especially in the face of the current deep recession, when the line between having a low income and falling into homelessness has become precariously thin. One disaster—a house fire, a tornado, an unexpected medical problem—can make the difference between being housed and being homeless for those who live on the poverty line.

But promising numbers and heartening thoughts provide little comfort on that long overnight shift; I spend most of it torn between a desire to fall asleep and a realization that it would probably make more sense to get up and do some work in this quiet, which I can never seem to find at home or at the college where I work.

I am especially ill at ease on this night. I had tried to do some spiritual preparation by reading Loaves and Fishes, Dorothy Day’s chronicle of her commitment to the Catholic Worker movement and her lifelong dedication to the poor and homeless of New York City. I expected to find in her writings a confirmation of my own politically liberal sympathies—exhortations, for example, for government and political leaders to do more for the poor and homeless. Instead, I found her firm support for personal responsibility: a conviction that individuals, families and parishes should bear the burden for helping our nation’s most impoverished citizens.

“It seems to me,” Day writes, “that in the future the family—the ideal family—will always try to care for one more. If every family that professed to follow Scriptural teaching, whether Jew, Protestant or Catholic, were to do this, there would be no need for huge institutions, houses of dead storage where human beings waste away in loneliness and despair. Responsibility must return to the parish with a hospice and a center for mutual aid, to the group, to the family, to the individual.”

I was taken aback by this argument, which ran not only through her writings but also through her life work. I found it difficult to understand why Day, on the front lines in the struggle against poverty, would not want all hands—including the government’s—pitching in to help. Only later, in the weeks that followed my overnight stay, would I explore Day’s philosophy of Christian anarchism, which helped explain her position.

But beneath that glowing Exit sign, as the night drifted lazily toward the hour when I could head home, I remembered something else—a saying that Day attributed to her co-worker Peter Maurin, who argued for the establishment of “houses of hospitality” for the poor. “We need houses of hospitality,” Maurin used to say, “to give to the rich the opportunity to serve the poor.”

At some point I fell into an uneasy sleep that night. I awoke at 6:30 a.m. and packed up my belongings, while the guest families packed themselves into a van that took them to their respective jobs, schools or day care centers. On the way home I stopped to pick up donuts and egg sandwiches for my wife and five children. When they had all left for school—my wife to teach, my children to learn—I crawled into my own bed to catch some rest. Before I fell asleep, though, I had begun to see Day’s position more clearly and to understand more deeply the truly Christlike work of organizations like the Interfaith Hospitality Network.

Help given to the poor by government bureaucrats, even if administered in what Day called “houses of dead storage,” can provide the basics to those most in need. But it ought not remove an opportunity many of us need: to provide the service to which Christ has called us. Like Day’s Catholic Worker movement, the Interfaith Hospitality Network offers as much to its volunteers as it does to its homeless families.

I still believe that government should devote more money and re-sources to fighting poverty in the United States. But I also understand, thanks to Dorothy Day and the Interfaith Hospitality Network, that I must play my personal part as well.

Show Comments (
3
)
Comments are automatically closed two weeks after an article's initial publication. See our comments policy for more.
Daniel Horan
8 years 10 months ago
I've long enjoyed Prof. Lang's columns in The Chronicle of Higher Education and his two books on teaching: Life on the Tenure Track and On Course - I was delighted to see his reflection in America!
8 years 10 months ago
I want to thank the author for his dedication to the homeless who sleep in the church.  He doubtless provides a feeling of safety to those families who seek shelter.  Homeless people and entire families who for whatever reason find themselves without proper shelter have a great need to stay together, to move on again in their lives.  Follow up care would seem essential so that those who have mental health problems (a sizable portion of the homeless) the ill and others who can't find a job are helped to find treatment, positions, jobs.  The government might be pleased for churches and community volunteer agencies to take on the task, but government support is necessary too.

Thansk, Anna Seidler
Gilbert Wells
8 years 9 months ago
My old friends from Worcester were Dan and Marj Dick but Dan is no longer with us.

I have subscribed to the Catholic Worker for about 50 years and believe Dorothy Day is a saint.

After graduating from a community college nursing program in 1981 at age 55 I worked every Monday as a volunteer nurse at SOME soup kitchen in Washington, DC. In the morning I was a nurse in a MASH unit and in the afternoon I was a volunteer lawyer for homeless people and veterans trying to obtain government disabilities.

Until then I had no idea how the government treated these citizens.

Everyone should do something like this to find out how many people in US society live.

Here in Portugal my wife and I pour meds in the local Salvation Army retirement home every Tuesday. My wife is now 75 and I am 85.

This article also appeared in print, under the headline “Night Shift,” in the November 21, 2011, issue.

James M. Lang is an associate professor of English and director of the college honors program at Assumption College, Worcester, Mass.