Pope to attend World Meeting of Families in Dublin 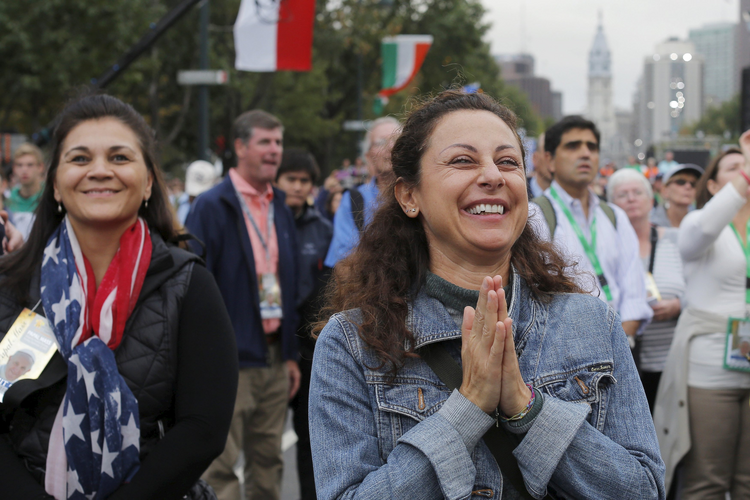 A woman reacts to Pope Francis' final words during the closing Mass of the World Meeting of Families in Philadelphia in this 2015 file photo. The pope will attend the next W.M.F., to be held Aug. 21-26 in Dublin. (CNS photo/Brian Snyder, Reuters)

Pope Francis has announced that he will attend the World Meeting of Families in Dublin on Aug. 25 and 26. He broke the news during the public audience in St. Peter’s Square today and thanked the Irish authorities and bishops—as well as the archbishop of Dublin, Diarmuid Martin, the chief organizer of the event, who was seated near him at the audience—for their efforts to prepare the visit.

The Irish Catholic Bishops’ Conference, “on behalf of the faithful of Ireland, warmly welcomed” the news that he will attend the 9th World Meeting of Families, which will take place in Dublin from Aug. 21 through 26. Its theme will be “The Gospel of the Family: The Joy of the World.”

‘Amoris Laetitia,’ migrants and sex abuse on the agenda for World Meeting of Families in Dublin
Gerard O’Connell

Global meeting of Catholic families in Dublin to include outreach to L.G.B.T. people
Michael J. O’Loughlin

In their press statement, the bishops said, “We are deeply honored that Pope Francis will come to our country to participate in this universal Church celebration of faith and joy, as well as of the contemporary challenges which face families. With great anticipation, we also look forward to hearing the apostolic guidance of His Holiness during his stay with us.”

Francis will arrive in Dublin on Saturday, Aug. 25, and will take part in the Festival of Families in Croke Park, the faith-based cultural event of the Meeting, that same evening.

The next day he will celebrate the concluding Mass of the World Meeting of Families in Phoenix Park. The bishops said the other 25 dioceses of the island of Ireland are supporting the Dublin archdiocese to ensure the success of the visit, which “no doubt will be an occasion of spiritual renewal for our laity, religious and clergy, as well as a strengthening of Christian family life.”

The W.M.F. will be centered around the apostolic exhortation “Amoris Laetitia.” In their message, the bishops noted:

The preparations for the World Meeting of Families in Dublin are benefiting from the 2014 and 2015 Synods of Bishops in Rome which discussed the role of the modern family in the world and how the Church should respond. Both synods were hosted by Pope Francis and were preceded by a worldwide consultation. The subsequent publication by the Holy Father, in April 2016, of his apostolic exhortation Amoris Laetitia (The Joy of Love), represents the fruit of these synods as he reflected on the significance of the deep mutual love of spouses and on their love for their children for the good of humanity and for the stability of society.

At today’s audience, two Irish families presented the official W.M.F. 2018 “Icon of the Holy Family” to Pope Francis. The Tobin family are from County Kildare and the Bushell family are residents in Rome. The delegation from Ireland was led by Archbishop Diarmuid Martin and Father Timothy Bartlett, the president and secretary general of W.M.F. 2018. The group also included the iconographer Mihai Cucu.

Francis will be the second pope to visit Ireland; John Paul II went there in 1979. But as a young Jesuit, Francis also studied English for almost two months in Dublin and has fond memories of his time there.