Global meeting of Catholic families in Dublin to include outreach to L.G.B.T. people 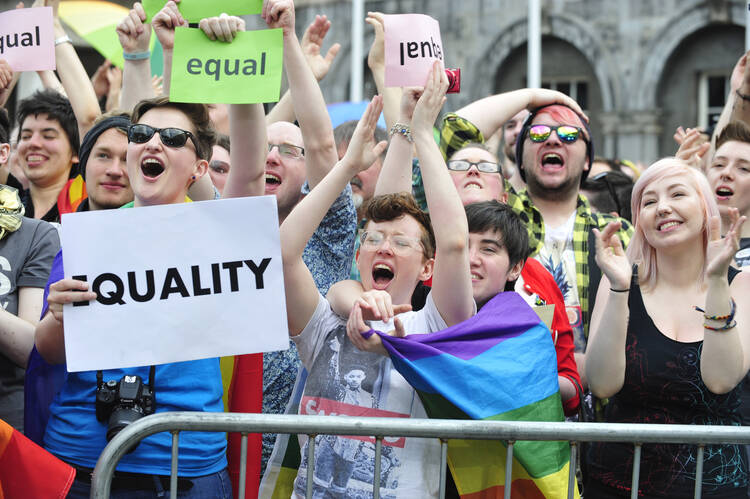 Supporters of same-sex marriage in Ireland react to their victory in a May 23, 2015, national referendum. (CNS photo/Aidan Crawley, EPA)

Catholics from around the world will gather in Dublin next August for the World Meeting of Families, an event Pope Francis is expected to attend and which is based on his 2016 pastoral letter about family life. Comments from some church leaders in Ireland, plus promotional materials meant to prepare Catholics for the gathering, suggest that the event is making a special outreach to L.G.B.T. people and their families at a time of rapid social transformation in Ireland.

The theme for the 2018 World Meeting of Families is “The Gospel of the Family: Joy for the World,” a reference to the pope’s letter about family life called “Amoris Laetitia,” or “The Joy of Love.” That pastoral letter addresses an array of issues facing contemporary families and calls on church ministers to accompany families through challenging times.

Some critics of the pope have complained about sections of “Amoris Laetitia” that they say undermine church teaching, particularly when it comes to nontraditional families. But a number of high-profile bishops and laypeople have rallied behind the document and many dioceses have begun implementing pastoral reforms based on it.

The theme for the 2018 World Meeting of Families is “The Gospel of the Family: Joy for the World.”

To help prepare families for the Dublin event, organizers and a Catholic publisher in Ireland created a multimedia program to be used in Ireland’s 1,300 parishes leading up to the event. It is called “Amoris: Let’s Talk Family! Let’s Be Family!”, and it covers topics such as consumerism, evangelization and how Catholics can incorporate spirituality into their family lives. The program launched Aug. 21, beginning a one-year countdown to the World Meeting of Families, and next year an “official catechesis” will be released, an event spokeswoman told America.

Within a section of the booklet, which is available online for free, titled “The Christian Vision for the Family,” which affirms Catholic teaching of marriage as a union between one man and one woman, there is a call for Catholics to recognize other kinds of relationships.

“While the Church upholds the ideal of marriage as a permanent commitment between a man and a woman, other unions exist which provide mutual support to [couples],” reads the document. “Pope Francis encourages us never to exclude but to accompany these couples also, with love, care and support.”

This text is printed above an image of two people embracing, one of whom has a rainbow printed on a hand. The image was chosen by the publisher, event organizers told America and said it would be removed from future editions.

Archbishop Diarmuid Martin of Dublin told America that he hopes the World Meeting of Families will “renew confidence in the family as an institution vital for humanity today and to give renewed confidence to Christian married couples to understand the nature of their vocation of witnessing in their lives to the tender loving care of our God revealed in Jesus Christ.”

He said he shares the pope’s position that L.G.B.T. people must be treated with respect and offered pastoral support and that he also agrees with Francis that marriage is a partnership between one man and one woman. Still, the Dublin event is based on the pope’s teaching about accompaniment and so all kinds of families are welcome.

“Christians in irregular marriage situations or in non-traditional families are members of the church. They are not excommunicated,” Archbishop Martin said. “They require pastoral accompaniment that reaches out to them where they find themselves, in such a way as to lead them along a pastoral path of discernment and conversion.”

In recent years, Irish attitudes have changed dramatically toward homosexuality, which was only decriminalized in 1993. In 2015, Ireland became the first nation in the world to legalize same-sex marriage by popular vote, with 62 percent supporting the measure. Earlier this year, the nation elected a gay man, Leo Varadkar, as prime minister.

Bishop Brendan Leahy, of the Diocese of Limerick, has said that the World Meeting of Families should be open to all kinds of families, including gay couples.

Some church leaders have signaled support for L.G.B.T. people. Earlier this month, for example, Bishop Brendan Leahy, who heads the Diocese of Limerick, said in an interview that the World Meeting of Families should be open to all kinds of families.

"We are living in changing times and family too is changing," he told The Independent. "We've had the referendum in favor of same-sex marriage and a lot of people voted in that referendum and all are equally welcome to join in this celebration of family,” he continued. "Everyone must be made [to] feel welcome next year. We all want to build a good family network of support in Ireland at all levels.”

Archbishop Martin used this year’s Good Friday address to challenge the church to be less judgemental, including to L.G.B.T. people.

“How could we have tried to use the teaching and the merciful way of dealing with sinners to justify or accept harsh exclusion? Think of so many groupings who were misjudged: single mothers who wanted to keep a baby they loved, gay and lesbian people, orphans,” he said.

Robert Shine, who works for the L.G.B.T. Catholic group New Ways Ministry, called the Dublin event “a prime moment to realize the kind of encounter and dialogue sought by Pope Francis.”

“Church leaders should formally welcome LGBT Catholics, their families, and ministries working with these communities to the gathering,” he wrote.Pope John Paul II held the first World Meeting of Families in 1994 in Rome and it has met every three years since. In 2015, it convened in Philadelphia, coinciding with Pope Francis’ visit to the United States.

Oct. 25: This article has been updated to include an interview with Archbishop Diarmuid Martin.

Michael O’Loughlin is the national correspondent for America and author of  The Tweetable Pope: A Spiritual Revolution in 140 Characters.

While we love the sinner, we must hate the sin. COURAGE is the ministry that helps those afflicted with same-sex attraction live the virtue of chastity. We must not give in to a false compassion that equates the mortal sin of sodomy with the sacrament of Holy Matrimony.
Authentic love requires that we speak the truth, and not sweep the truth under the rug just because it leads to discomfort for some. Truth is not optional. God will supply the virtue of fortitude to help all of us work and struggle against our predominant faults. Remember, we're all sinners who need God's grace to give us the strength to repent of our sins.