Cardinal Cupich: Pope Francis’ family teaching is a paradigm shift in the church 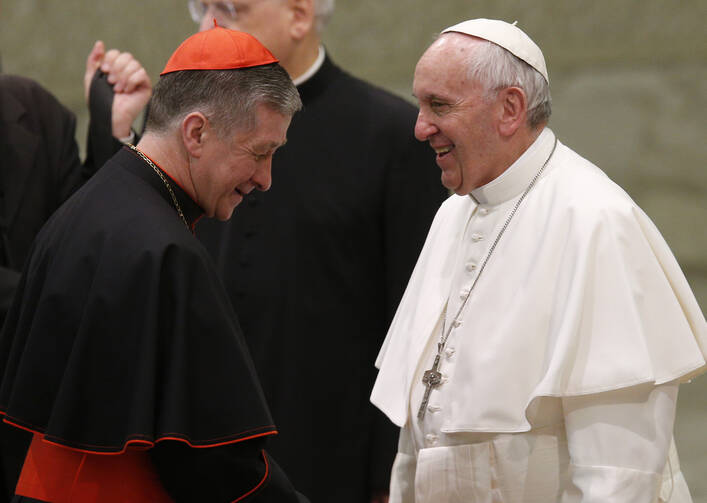 Arguing that “the complex realities that couples and families face today are singularly different from those of the past,” Cardinal Blase Cupich urged Catholic leaders to embrace Pope Francis’ “call to action” and to welcome “a new way of relating to the lives of families today.”

The Chicago archbishop, delivering an address on Friday afternoon at the Von Hügel Institute, a Catholic think-tank affiliated with the University of Cambridge, said ministry to families today must find “a balance between teaching and listening” that is “open to the possibility of learning from one another.”

He said that Pope Francis has encouraged church leaders to accept “a healthy dose of self-criticism” and called for “greater attention to the voices of the laity, especially on matters of marriage and family life.”

Cardinal Cupich: “The complex realities that couples and families face today are singularly different from those of the past.”

“In a genuinely synodal church,” he said, “there is no hierarchical distinction between those with knowledge and those without.”

In the talk, Cardinal Cupich threw his red hat in with the Vatican’s secretary of state, Cardinal Pietro Parolin, who last month said Pope Francis had initiated a “paradigm shift” in Catholicism with his 2016 pastoral letter on the family, “Amoris Laetitia,” or “The Joy of Love.”

“It’s a paradigm change, and the text itself insists on this; that’s what is asked of us—this new spirit, this new approach!” said Cardinal Parolin, considered second only to the pope in terms of ecclesial rank. “So every change always brings difficulties, but these difficulties have to be dealt with and faced with commitment.”

Ministry to families today must find “a balance between teaching and listening.”

“Amoris Laetitia,” the papal letter that followed a two-year long series of meetings and consultations with bishops from around the world, has won praise for its reality-based approach to pastoral care for families. But critics have charged the pope with undermining traditional church teaching, particularly because of a provision that could allow some divorced and remarried Catholics to receive Communion.

Since the publication of the document, some church leaders have expressed support for creative solutions to pastoral family challenges that at one time would have been verboten. Just last week, in response to a question about whether same-sex couples might be able to receive church blessings, a German cardinal suggested such decisions are best left to pastoral ministers on a case-by-case basis.

Reception of “Amoris Laetitia” has been seemingly slow in the United States, with a relatively small number of bishops vocally supporting the document and publicizing initiatives to implement it in their dioceses. Cardinal Cupich told America that “any document of this significance needs time to be received” and that he is “pleased” with its progress, including the continued collaboration between theologians and bishops it has provoked.

Pope Francis has encouraged church leaders to accept “a healthy dose of self-criticism.”

But push back continues. Critics seized on Cardinal Parolin’s comments, with commentator George Weigel calling his words “unfortunate” in an essay published by First Things.

But Cardinal Cupich, who last fall co-hosted a conference at Boston College with a number of bishops and lay theologians exploring ways for the church to implement the pope’s family teaching, backed Cardinal Parolin’s analysis, calling “Amoris Laetitia” “a major shift in our ministerial approach that is nothing short of revolutionary.”

Cardinal Cupich described the family as “a privileged place for God’s self-revelation,” and he said church leaders must listen to the lived experience of Catholic families, which “represents an enormous change of approach, a paradigm shift holistically rooted in Scripture, tradition and human experience.”

Cardinal Cupich described the family as “a privileged place for God’s self-revelation.”

While the cardinal did not touch directly on the question of divorce and Communion, he did say the conversation between families and pastoral ministers could yield greater understanding of what the church holds true.

“Doctrine can develop as a result of the church’s merciful accompaniment of families because God has chosen the family as a privileged place to reveal all that the God of mercy is doing in our time,” he said.

Citing the pope, he said developments in doctrine include “remaining open to the invitation to see our moral teachings on marriage and family life through the lens of God’s omnipotent mercy.”

Cardinal Cupich also dismissed critics who claim the pope is undermining church teaching, saying they “misinterpret and misunderstand ‘Amoris’ simply because they fail or refuse to take into account the present reality in all its complexity” and that they “limit their scope to an idealistic understanding of marriage and family.”

Cardinal Cupich: “Doctrine can develop as a result of the church’s merciful accompaniment of families.”

“As a result, they narrow their options when it comes to responding to the lived realities of people’s lives since their knowledge is fragmented and incomplete,” he said.

Francis, he said, is not inventing new ideas. Instead, the pope is “retrieving a way of thinking about church teaching and practice that has its root in our tradition.”

Philip McCosker, the director the Von Hügel Institute, called the cardinal’s talk “a breath of fresh air in a church riven by tribalisms and the false dichotomies of easy and trite answers to the moral issues of real life.”

“As a theologian, I’m reminded here of the radical understanding of God at the root of our tradition, which is easy to forget, a God who is radically transcendent and therefore radically immanent in all of creation,” he told America.

The challenges families face today are different from the past, the cardinal said, highlighting social support structures that “have all but evaporated”; economic strains on families, including lack of equal pay for women; “alienation and isolation” that can lead to substance abuse; along with “seismic shifts in society” that “affect marriages and families.”

These realities, Cardinal Cupich said, make necessary “a shift in the way the church’s ministers interact with families and married couples” that begins “with the understanding that families are not problems to solve.”

He said bishops, ministers and theologians “should be ready to instruct” on issues related to family life—but always with “the sensitivity of a spiritual director or a close friend who can listen to the experiences of another humbly, not pretending to have all the answers, and always ready to help discern the movements of the Spirit in that particular moment.”

The Church is a family. As a family, we need mothers as well as fathers. Hope the paradigm shift eventually will help us discard obsolete gender stereotypes, and recognize that the exclusively male priesthood is just a cultural thing that is no longer for the glory of God and the good of souls. For the redemption, and the sacramental economy, the masculinity of Jesus is as incidental as the color of his eyes. We need women priests!

Did the Cardinal talk to The Boss? Supporters of AL just spent two years denying that AL represented a "paradigm shift" and that it was in continuity with long tradition. Maybe the Cardinal didn't get that memo. This won't help concensus building along the former Francis party line I'm afraid.

I am glad Pope Francis is willing to accept that family life is often difficult and the role of bishops, ministers and theologians is to listen with the sensitivity of a spiritual director. The church would be a much better place if that listening occurred more often.

What is sometimes forgotten when using the phrase “paradigm shift” is that in common English usage, it is often implied as well as understood that the elements of a new paradigm need not necessarily be mutually exclusive with respect to those of the old. The new may contain exemplars and practices that are the same as those of the old, but may contain enough new ones to be regarded as a “shift” from the old.

A paradigm shift is not the same as a doctrinal shift.

Amoris Laetitia isn't a paradigm shift. It tells women their main job is having kids, tells gay people their marriages are nothing like the marriages of others, changes nothing about contraception, sex before marriage, or, really, even divorce/remarriage.