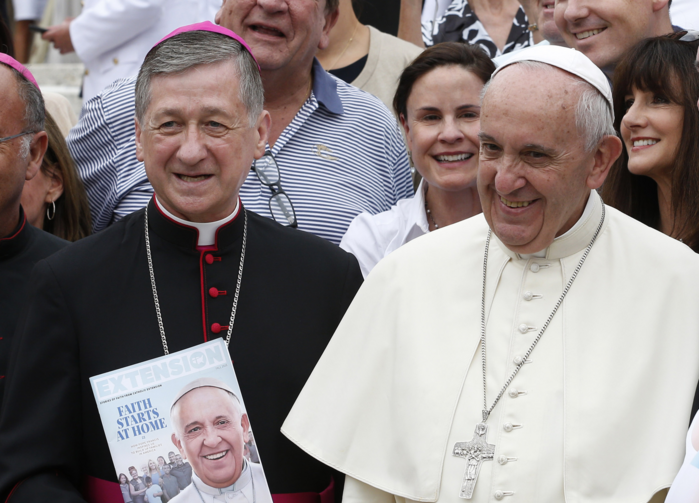 U.S. Archbishop Blase J. Cupich of Chicago with Pope Francis during his general audience in St. Peter's Square at the Vatican, on Sept. 2, 2015. (CNS photo/Paul Haring)

A change in canon law announced today by Pope Francis, which gives greater control over liturgical translations to local bishops’ conferences, is at its heart an affirmation of the Second Vatican Council.

That is how Cardinal Blase Cupich, the archbishop of Chicago, interprets “Magnum Principium,” Francis’ new motu proprio, a type of document issued by the pope’s own initiative.

“This is a very welcome and much-needed action by the Holy Father,” he told America. “I especially applaud his wisdom in framing the ‘motu proprio’ as a clarification of what was intended by the Second Vatican Council.”

“This is a very welcome and much-needed action by the Holy Father.”

In recent years, some Catholics have sought a “reform of the reform,” attempting to slow down, roll back or even reverse some of the liturgical changes introduced by the council by, for example, elevating the celebration of the Mass in Latin or recommending that the priest celebrate parts of the Mass with his back toward the congregation. Both of these, say liturgical scholars, are not what documents like “Sacrosanctum Concilium” intended, which encouraged “full” and “active” participation by the laity. Vatican II also ushered in changes in church structure, giving more authority to local bishops’ conferences. But in the wake of the council, some Catholics believe these changes went too far and have sought to centralize decision-making in Rome.

Cardinal Cupich said the pope is making clear that Vatican II documents are authoritative and permanent—something Francis has said before during his pontificate. Most recently, he proclaimed the reforms of the council “irreversible.”

“Pope Francis is giving in this document an authoritative interpretation of the council as it relates to the responsibilities of bishops for the liturgical life of the church,” Cardinal Cupich said. “But, even more significantly, I believe this development is in keeping with the program of Pope Francis, which Cardinal Wuerl once described as reconnecting the church with the Second Vatican Council.”

(In an interview with America published in March, Cardinal Donald Wuerl, the archbishop of Washington, said of the pope, “I think his great contribution to date has been the reconnecting of the church with the energy of the Second Vatican Council, the energy coming out of that council.”)

Cardinal Cupich said the pope is making clear that Vatican II documents are authoritative and permanent.

Cardinal Cupich said he believes the latest teaching has broader implications than questions of translation, saying, “It sends a signal regarding the methodology that will be used in bringing about other reforms that are being considered by the Council of Cardinals.”

According to the Vatican, the group of nine cardinals advising Pope Francis is considering a number of reforms that would decentralize some Vatican offices and shift responsibility to local bishops conferences.

“We should anticipate that all these reforms will likewise be framed as authoritative interpretations of the Second Vatican Council, thereby rooting them in the tradition and giving them permanence.”

Last month in comments about the liturgy, Francis said, “the reform of the liturgy is irreversible.”

A new translation of the English-language Mass was completed in 2010, under the auspices of the Vatican-approved “Vox Clara” translation group, which followed the guidelines set out in the document “Liturgiam Authenticam.” That rule required a literal, word-for-word translation from the original Latin text. The change set off concern from some lay Catholics, bishops and priests who found the translation clunky and awkward. The change in canon law announced Saturday shifts the responsibility for translation from Rome back to bishops’ conferences—though the Vatican will still have the final say over liturgical texts. It is unclear how the new rule will affect the translation used in the United States.

The Vatican’s chief liturgist, Cardinal Robert Sarah, has been supportive of many of the efforts to restore some of the old elements of the Mass. In a speech last year, he encouraged priests to celebrate the Mass ad orientem, in which their backs would face the congregation during parts of the Mass, prompting a rebuke from Pope Francis. Today’s explanation of the rule change distributed by the Vatican on Saturday was not signed by Cardinal Sarah but by Archbishop Arthur Roche, the secretary of the cardinal’s office.

Last month in comments about the liturgy, Francis said, “the reform of the liturgy is irreversible.”

Rita Ferrone, a liturgist writing at PrayTellBlog, says the pope’s latest teaching is a sign that he wants to give authority over liturgical issues back to bishops’ conferences—another movement in his effort to decentralize parts of the church.

"The change set off concern from some lay Catholics, bishops and priests who found the translation clunky and awkward."
That's a very charitable way of phrasing it...

Charitable indeed. That translation would get an "F" in an English 101 Comp class.

This article creates a kind of strawman - persons seeking to reverse the Council, presumeably the previous pontiff, and those seeking to continue its liturgical renewal, presumeably the current one. Except for vague affirmations that liturgical scholars state (which scholars, would be nice to know) that Sacrosanctum concilium requires certain things, the examples given do not actually help. Use of Latin? Explicitly mentioned in SC. Versus populum? Not mentioned in SC. Are each of the many debated elements of recent decades conciliar, post-conciliar choices that might be made differently, or simply on some liturgical wish list favored by some liturgist.

In the end, what might have been a useful article engaging scholarly opinion about the meaning of the concilar texts, distinguishing dogmatic principles from disciplinary choices, and the variety of liturgical decisions of popes historically, within that framework, it comes off as an editorial for a point of view masquerading as the certain meaning of the Council.

Excellent points. This article obscures several major distinctions that should be made and is gravely misleading about the actual Vatican II documents and subsequent history. It requires heroic charitableness to believe its author and its editors are acting in good faith, rather than seeking to manipulate the ignorant and wooly-headed. How sad that the centuries-old reputation of Jesuits for clarity and honesty is tossed aside, in favor of propagandizing that fits the crudest old stereotype of "Jesuitical" lies.

Mr. Walter, Specifically, what do you think the pontiff meant by his motto proprio, that differs substantially from what the author wrote?