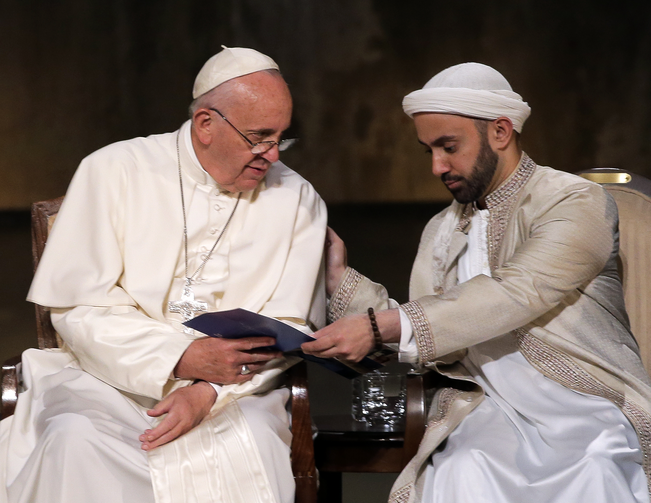 Pope Francis accepts a program from Iman Khalid Latif, executive director of the Islamic Center and chaplain to students at New York University, during an interreligious gathering at the National 9/11 Memorial and Museum in New York. (CNS photo/Ray Stubblebine, pool)

Many U.S. Catholics have not only ignored their Muslim brothers and sisters but harbor discriminatory views about Muslims at alarming rates.

Jordan Denari Duffner, an associate at the Bridge Initiative and author of the new book, Finding Jesus Among Muslims: How Loving Islam Makes Me a Better Catholic, joins us on this week’s episode of Jesuitical. Jordan discusses why she felt called to work in Catholic-Islamic dialogue, and why it’s an essential part of the Christian vocation.

In Signs of the Times, we discuss President Trump’s invocation of dreamers in his State of the Union address, and a Chicago priest who is on hunger strike in support of DACA recipients. We also provide an update on Pope Francis’ handling of allegations of sexual abuse in Chile, a rise in demonic activity and a limb of St. Francis Xavier making a road trip across Canada.

Does the author believe that in order for a conversation to take place between a Muslim and a Catholic there has to be honest dialogue?

That would require that each tell the other what their religion believes and preaches. Will a Muslim agree to this?

How many Muslims have you met to ask such a question? I find I could ask how many Catholics would agree to having someone from any other religion, even another Christian, tell them what they believe and preach. Catholics do not have the corner on open mindedness market. In some cases Catholics can be very closed minded.

"That would require that each tell the other what their religion believes and preaches. Will a Muslim agree to this?"

The vast majority of Muslims are good, honest, kind, loving people. The answer to your disturbingly weighted and subtly racist question is, "yes." Perhaps you should learn from Muslims and try to be direct and honest about your own racism and bias instead of trying to cloak it in dishonest questions.

Every time you use an ad hominem you say your own comments and arguments are specious. So I again as always thank you for agreeing with me.

Yes, in Arabic. With context. As well as the history that informs which sects follow which Hadith and why. The same way that I was taught by the Church to read and understand the Bible. In the original languages, in socio-historical and theological context.

It is plain that what you have done is what is typical of the neo-'Evangelical' trash that doesn't bother to understand the deeper truth of any particular position. You've read it at best in English translation, without context and being sold to you with a particular, anti-Muslim bias that has turned Muslims into the new whipping boy of people such as yourself who pretend to be Christian but who don't follow the teachings or example of Christ, but instead try to sell a position of being holier-than-thou through putting others down without understanding even their basic humanity.

I'll even give you a pertinent example. The thing that you were likely trying to cowardly make a hint at that's often being sold by the neo-'Evangelicals' as proof that Muslims are 'bad' is the idea of "taqiyya." Perhaps if you weren't such a coward or some part of you didn't suspect that it was neo-'evangelica' propaganda, you would have named it outright instead of trying to sneakily hint at it.

Taqiyya is said, by the neo-'evangelicals,' to give permission to Musims to lie to people. The implication, for whatever reason, is that Christians don't lie (which is ridiculous at best and ironic given that what they say about Taqiyya is an outright lie). The implication is that you cannot trust what a Muslim says, even though there is a great deal in the Quran and Hadith about truth being a cornerstone of Islam and requirements regarding telling the truth.

Taqiyya in context says one thing to a particular sect of Islam. It says that if someone is threatening your life (trying to convert you at the point of a sword, as was often done by Christians to Muslims and Jews for many centuries), you may lie in that moment about being a Muslim without theological consequences. But that is the only time it is allowed -- when someone is saying, "I will kill you if you say you are a Muslim."

The real lie comes from people like you and the neo-'evangelicals' who claim it means Muslims can, and by implication do, lie all the time about everything. Irony at its best. Liars lying about other people lying.

But again your personal attacks belie anything you say.

Islam is the fastest growing religion because it cuts through the brokenness of the post-modern world: First Islam doesn't water down its doctrines. It gives it to the people without sugar coating. Such simplicity and straight forward is a clear advantage to the confusion and watered down Catholicism predominant in the culture. Oh, by the way, I am not dividing the church into left and right wing. Our church is not an American political party. What I mean is that the Church has decided to dance a tango with the culture and it ain't working. Islam fiercely refuses to dance such tango. Second, the resilience of Muslims when political, social, and cultural actors want to suffocate it is admirable. I recently read how Ataturk tried to drown Islam in Turkey --through democratic means-- yet pious Muslims resisted and today one can say pious Muslims are victorious in Turkey. Thanks to the leadership of president Erdogan who understands that 14 centuries of tradition cannot be thrown to the garbage for the fads of the moment. We have a lot to learn from Muslims: piety, resilience, respect for traditions, and a simplicity in the delivery of the message.

We have a lot to learn from Muslims: piety, resilience, respect for traditions, and a simplicity in the delivery of the message. That's a big bull!! Almost every religion, when they are dominant, is the same; hypocrisy!! You need to live in country where these people are in majority and feel what you call 'piety'!!

I'm acquainted with several Muslims (one of whom was my supervisor at work) and in my experience they are decent, reasonable people. Some years ago I read an interesting book, "A Short History of Islam," which provided a compelling case for the essentially peaceful teachings of the faith . Of course, the Islamic State of Iraq and Syria (ISIS) is a notable exception, as a terrorist group. However, it's my understanding that many Muslim scholars have denounced ISIS as having seriously distorted the teachings of Islam to (wrongly) justify violence in the name of God.
I certainly don't claim to be knowledgeable about the intricacies of Islam. However, it's my understanding that some predominantly Muslim nations which follow sharia law permit no religious freedom. I will gladly accept correction from someone more well-informed, but I understand that in Saudi Arabia only Muslims can erect houses of worship and practice their faith. I believe that Christians, Jews, and people of other religions can be legally punished for attempting to practice their faith, even in the privacy of their home. Clearly, such a practice is reminiscent of our Church and many other Christian churches in past centuries ( or in some predominantly Catholic countries in the twentieth century, whose laws have been generally amended so that Catholicism is no longer the official state religion). One person who posted expressed some admiration for Muslims who often resist the influence of modern Western cu lture, and I agree that while our culture is worthwhile in many, if not most, respects (democratic principles, etc.) that in the past 50 or so years a number of practices that in my view are immoral are now largely tolerated, even defended as "rights." These include the legal right to the violence of abortion, and the common acceptance of cohabitation, as well as same-sex marriage. I might point out as another person remarked that our Church isn't a political party, so it's ultimately not a matter of being liberal or conservative. In point of fact, I' m politically fairly liberal. I oppose capital punishment, support stringent gun control laws, and support reasonable laws and regulations to protect our environment from degradation. I also support reasonable government assistance to the millions of Americans in need. These include among other people those who are disabled (I'm a retired Special Education teacher), homeless, elderly, mentally ill, veterans, people who are addicted to drugs, and those who are seriously ill. I also support humanitarian assistance for impoverished nations, and oppose unfair, disproportionate tax cuts for the wealthy. I favor war only as a last resort once all vigorous diplomatic efforts have been exhausted, and civilians must never be deliberately targeted. Also, I agree with the teachings of recent popes, especially Pope Francis, that nuclear weapons must never be used. Regarding gay marriage: I readily admit to being an imperfect gay Catholic. Years ago, I had sex with men, and because I regretted this behavior, I received forgiveness and consolation through the Sacrament of Reconciliation. I do have a gay friend, whom I talk to occasionally on the telephone (he doesn't drive, and for health reasons I haven't driven in several years). I agree with the Church that gay people should be treated with respect and compassion, and not be the subject of violence. (I very well remember being taunted as a youth fairly frequently being called a faggot). In a similar sense, I think that as a group Muslims shouldn't be demonized.