Who is Madeleine Delbrêl—the “French Dorothy Day” Pope Francis made venerable this weekend? 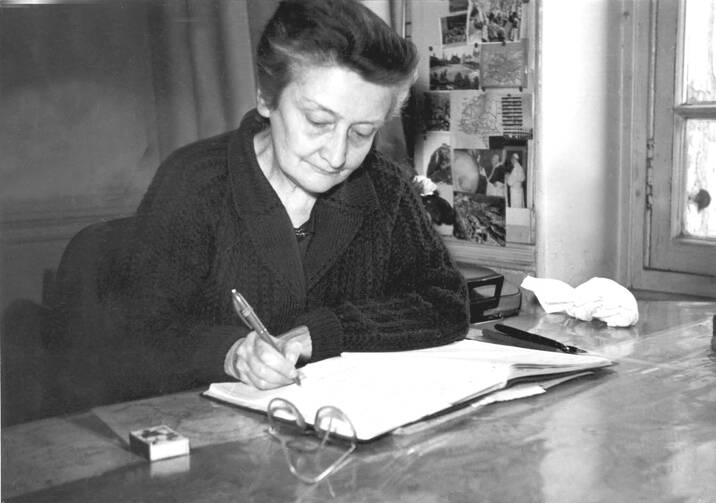 These may not be words one would normally associate with a saint, but last weekend Pope Francis set the woman who wrote them, Madeleine Delbrêl, on the path to beatification.

It was a move eclipsed by Francis’ official recognition of the martyrdom of the seven Trappist monks made famous by the film “Of Gods and Men,” but Madeleine Delbrêl is worth our attention, even if she has not been the subject of a feature film at Cannes.

Delbrêl wrote her atheist manifesto (entitled with the declaration above) at age 17 while living in Paris in the early 1920s—the same Paris where modernist writers and artists like Ezra Pound, Gertrude Stein, Henri Matisse, Ernest Hemingway and F. Scott Fitzgerald debated in salons. Delbrêl, a wealthy teenager with trendy short hair and clothes she designed herself, studied philosophy at the Sorbonne by day and impressed her parents’ agnostic intellectual friends by reading from her writing in the evenings. She decided that if life were “more absurd by the day” and death was all she could count on, she should live her youth to its fullest. She and her friends threw extravagant parties, and she was engaged to a fellow atheist philosopher, who by her best friend’s account was tall, handsome and smart.

But Delbrêl’s life did not remain so charmed. When she was 20, her fiancé broke off their engagement to join the Dominican order. Around the same time, her father and mother became estranged from one another. Delbrêl found herself returning to the question of whether God existed. It was possible, she concluded, and if it were possible, then she ought to try praying.

She describes her conversion: “By reading and reflecting, I found God; but by praying, I believed that God found me and that he is living reality, and that we can love him in the same way we love a person.” And Delbrêl loved people strongly. Her friends describe her as an empathetic listener, who was always quick to jump to their defense, engage in deep conversations or extend a maternal hug.

Why you can’t become a saint by yourself
Terrance Klein

After her conversion, around the time that the Great Depression hit France, Delbrêl founded a house of hospitality with two other working women in a predominantly communist suburb of Paris, where she lived until her death. This, along with her prolific writing and social justice work, often lead people to call her the “French Dorothy Day.”

Members of Delbrêl’s house promised chastity and simple living, and they worked primarily for workers’ rights and the unemployed while also evangelizing, a difficult task in a city where Christians and communists often harassed one another in the streets.

Because of her social justice work, and because she was drafted to fill a position coordinating social programs for the government during World War II, Delbrêl often found herself working side-by-side with communists and becoming close friends with them. After the war, the new communist mayor of Ivry asked Delbrêl to continue working as Minister of Social Services. She wrote extensively on Marxist-Catholic relations in various books, including The Marxist City as Mission Territory (1957), and pioneered the idea that Catholics could love communists while rejecting their ideology—an approach that was unpopular among French Christians as well as Americans at that time.

In The Marxist City, Delbrêl declares: “If there are Christian women whose husbands or children, whose brothers or sisters, are Communists, they love them with a love God makes his own. To love them, they don’t have to accept the Party card that declares their opposition to God.... But by refusing their card, these women aren’t required to deny their flesh, their heart, their affection.”

Delbrêl’s most important contribution to theology, though, may have been her writing on the missionary role of the laity, which she first mentioned in 1933, years before the idea would be picked up by the mid-century ressourcement movement and then written into official church teaching at the Second Vatican Council (“Lumen Gentium,” Nos. 30-38).

Her most popular book, We, the Ordinary People of the Streets, outlines in detail how lay people can be missionaries in daily life. In one particularly lyrical passage, she describes how a lay missionary sees the world:

From a sand dune, dressed in white, the [traditional] missionary overlooks an expanse of lands filled with unbaptized peoples. From the top of a long subway staircase, dressed in an ordinary suit or raincoat, we [ordinary people] overlook, on each step, during this busy rush-hour time, an expanse of heads, of bustling heads, waiting for the door to open. Caps, berets, hats, and hair of every color. Hundreds of heads - hundreds of souls. And there we stand, above. And above us, and everywhere, is God.

God is everywhere—and how many souls even take notice? ...

Lord, Lord… My eyes, my hands, my mouth are yours.

This sad lady in front of me: here is my mouth for you to smile at her.

This child so pale he’s almost gray: here are my eyes for you to gaze at him.

This smug young man, so dull, so hard: here is my heart, that you may love him, more strongly than he has ever been loved before.

For Delbrêl, evangelizing did not mean giving someone faith, which she believed only God could do, but telling “people, who don’t know, who Christ is, what he said, and what he did—so that they do know it...in order that they may know what we believe and what we are sure of.”

Delbrêl died unexpectedly of a brain hemorrhage at age 60, at her desk in the house of hospitality in Ivry. An effort is underway to restore her house in Ivry, and two communities named after her have been established in France: one for young professionals and another for young men discerning priesthood.

Now deemed “venerable” by the Catholic Church, the step before beatification and then sainthood, Delbrêl is a saint “for the rest of us”—for people who will never travel far as missionaries or have a film made about them but who hope to say yes to God in a million little ways every day, who “believe with all [their] might that this street, this world, where God has placed [them], is [their] place of holiness.”

Oops! I meant to say "could" not would!