Why you can’t become a saint by yourself 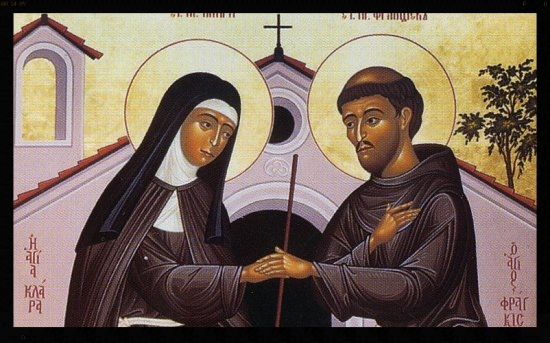 Sts. Francis and Clare of Assisi

Here is the backstory. Benedict of Nursia brought monastic life to Western Europe. His monasteries preserved civilization during its darkest years, which is why his namesake, Pope Benedict XVI, called him one of the founders of Europe. We call him St. Benedict because he established a way for Christians to radically surrender themselves to Christ in a communal life centered on prayer and labor.

Scholastica was Benedict’s twin sister. Equally devoted to Christ, and from a very young age, she founded monasteries for women. In addition to poverty and obedience, both monks and nuns observe celibacy, hence the separation of the sexes in monastic life.

Benedict’s rules were righteous, but his little sister Scholastica was more rooted in love.

And here is the story as it comes to us from Pope St. Gregory the Great.

Scholastica, the sister of Saint Benedict, had been consecrated to God from her earliest years. She was accustomed to visiting her brother once a year. He would come down to meet her at a place on the monastery property, not far outside the gate.

One day she came as usual and her saintly brother went with some of his disciples; they spent the whole day praising God and talking of sacred things. As night fell they had supper together.

Their spiritual conversation went on and the hour grew late. The holy nun said to her brother: “Please do not leave me tonight; let us go on until morning talking about the delights of the spiritual life.” “Sister,” he replied, “what are you saying? I simply cannot stay outside my cell.”

When she heard her brother refuse her request, the holy woman joined her hands on the table, laid her head on them and began to pray. As she raised her head from the table, there were such brilliant flashes of lightning, such great peals of thunder and such a heavy downpour of rain that neither Benedict nor his brethren could stir across the threshold of the place where they had been seated. Sadly he began to complain: “May God forgive you, sister. What have you done?” “Well,” she answered, “I asked you and you would not listen; so I asked my God and he did listen. So now go off, if you can, leave me and return to your monastery.”

Reluctant as he was to stay of his own will, he remained against his will. So it came about that they stayed awake the whole night, engrossed in their conversation about the spiritual life.

Pope Gregory then offers an appraisal: “It is not surprising that she was more effective than he, since as John says, God is love, it was absolutely right that she could do more, as she loved more.”

All Christendom recognizes the sanctity of both brother and sister. Like most saints, the personality of either one of them probably overwhelmed most of the folk whom they encountered. And that is why the story matters. Even the great St. Benedict needed someone in his life to observe his experience of God and to reflect back to him what she saw. Benedict’s rules were righteous, but his little sister Scholastica was more rooted in love.

Loving others is how we become ourselves. God created each of us to find completion outside ourselves.

The pattern is all-pervasive in the history of the church, though the couplings are quite varied. Think of the great Augustine, finally learning to listen to his equally wise mother, St. Monica. One does not go very far into the story of St. Francis of Assisi without being introduced to St. Claire of Assisi. Though she was 27 years his senior, St. Teresa of Avila virtually declared St. John of the Cross to be her spiritual father. St. Francis de Sales would never have written his Introduction to the Devout Life if his cousin, Madame Marie de Charmoisy, the wife of an ambassador of the Duke of Savoy, had not asked him for advice on the spiritual life.

One can go on. St. Thomas More and St. John Fisher were both prisoners and martyrs of King Henry VIII, each drawing strength from the lonely witness of the other. The missionary saints Cyril and Methodius were siblings. The great theologian of the 20th century, Hans Urs von Balthasar, called his writing nothing more than a meditation upon the mystical experiences of his good friend Adrienne von Speyr.

One can be quite right in opinion and quite wrong in charity.

All of this corrective coupling finds its origin in the Gospel, where the John identifies himself as no more than a voice, one announcing the advent of God’s chosen, the one before whom the Baptist must decrease. Yet John was the older cousin and the first to embrace an eremitical life of preaching. In the silent years of their lives, those not revealed in the Gospels, are we really to believe that the Baptist did not exercise an influence upon his younger cousin? Perhaps, like all those whom we love, John helped Jesus to understand his own identity.

So what is the lesson for those of us still so far from sanctity? Just this: There is no I without you. Loving others is how we become ourselves. God created each of us to find completion outside ourselves. This is the inner law of our nature.

And because of this, there is no Christ without the church. One cannot be his disciple and not share life with Christ’s other disciples. If Christ is your Lord, and, as far as you know, you are the only one who truly understands him—along with a chosen few who have been given the evidently extraordinary grace to agree with you—how do you know who is Lord and who is disciple? How do you know that the Lord you profess is not an idol, fashioned after your own predilections?

Everyone who leaves the church, whether to found his own or simply to boycott a parish of fools, insists that he or she knows the real Christ, knows what this Christ wants and knows how wrong, how hypocritical, everyone else is. The church never runs short of saints or reformers. She lives by her saints; she renews herself by saints who are reformers; yet she gains nothing but the sin of division when reformers do not strive for sanctity.

Here is the real issue. One can be quite right in opinion and quite wrong in charity. The saints are patient. They can be patient with the errors of others because they deeply trust the Lord of all truth. Saints take correction from others because they know that none of us sees everything. And saints never choose between truth and charity. They do their best to listen and to learn from others because to lose either, truth or charity, is to lose everything. Certainly, it is to lose Christ, the one who was martyred for both.

thank you Fr. a very well meaning article & guidance how to respond to others esp...when at times the conversation leads to arguments...typical of catholics & our christian bros...and most esp. the other faith of our bros...it's a good points for reflection how we behave..."Truth & Charity" I will remember this...and the word 'One can be quite right in opinion and quite wrong in charity. " this two points had made my day...thank you Father & Godbless!

Wonderful meditation for Advent and for these times in our country: "One can be quite right in opinion and quite wrong in charity. The saints are patient. They can be patient with the errors of others because they deeply trust the Lord of all truth. Saints take correction from others because they know that none of us sees everything. And saints never choose between truth and charity. They do their best to listen and to learn from others because to lose either, truth or charity, is to lose everything. Certainly, it is to lose Christ, the one who was martyred for both."

I don't think that Dorothy Day could be who she was without her daughter, Tamar, who incidentally left the Catholic Church. Tamar also wouldn't allow Dorothy's spiritual director, Fr. Hugo, to preach at Dorothy's funeral, even though Dorothy had requested him.