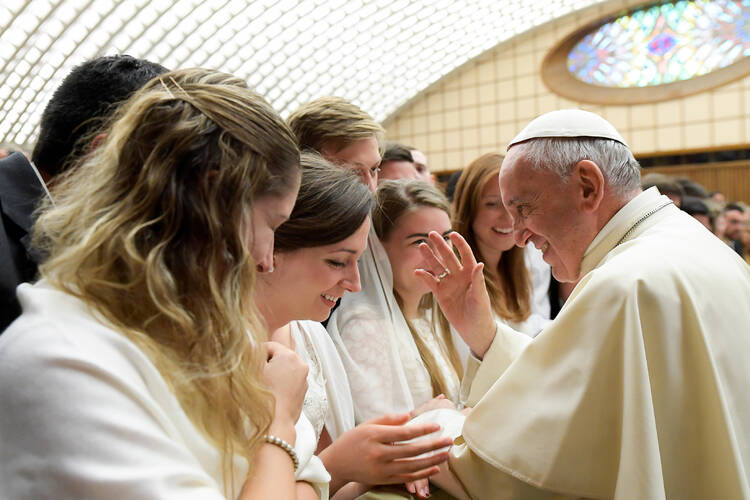 Pope Francis blesses a woman during his weekly audience in Paul VI hall at the Vatican Aug. 9 . (CNS photo/L'Osservatore Romano)

You have heard it said, “Who run the world? Girls” (Bey 4:12). But we ask: Who runs the church? Popes, of course. But across the country there are dedicated women of faith taking the lead in parishes, schools, social ministries—and magazines. Our guest this week is one of them.

Kerry Weber is an executive editor at America and the driving force behind a groundbreaking new survey of U.S. Catholic women. We ask her why Catholic women are so often reluctant to claim the label of role model and what the church can do to lift up the important work women are already doing in the church.

Make sure to check out the new special issue on women in the church, which features Kerry’s piece, “The humble, indispensable women leading the Catholic Church you’ve (probably) never heard of,” plus tons of other great articles diving into the survey data.

And in Signs of the Times, Pope Francis says he is “truly afraid” of nuclear war—and how Catholics in Hawaii reacted when they thought that such a war was coming. Next, we discuss what America’s findings about the politics of U.S. Catholic women might mean for the 2018 midterm elections. Finally, we tackle the history of football’s “Hail Mary pass” and the question: Should church doors ever be locked?

Have you left us a review on Apple podcasts yet? We’d be eternally grateful if you did. Please. Not that we’re desperate. If you already have, thank you! Do keep in touch: Write us an email at jesuitical@americamedia.org and follow us on Twitter @jesuiticalshow so you can take part in our unscientifically significant polls!

Pope Francis: “I am truly afraid” of nuclear war.

Overall, the survey found that 59 percent of Catholic women are Democrats or lean Democratic, whereas 38 percent are Republican or lean Republican.

2 ounces of Jameson, an ounce of St. Germain and a dash of Angostura bitters, over ice. (The original recipe calls for Scotch. Apparently, Irish whiskey is not, in fact, the same thing as Scotch. You live and you learn.)

More: Women in the Church / Women's Issues / US Church

Well, the article's last question explains the reason women do not claim to be role models, and why no one really bothers to notice that women are doing the majority of important leadership roles in our parishes and schools. In order to keep women from being equally respected as men, especially as church leaders, we keep them from the prestige, rituals and sacraments that afford their male counterparts public or parish acknowledgement for their leadership works. So yes, unless Jesus Christ stated, expressly, in any Gospel that women should be kept from any of our sacraments, or ordination of any variety, or any leadership or works that men are assumed welcomed by Christ to take part in, we should never keep those doors locked to women. There are no such statements by Christ regarding women in any of our four accepted Gospels. We sin when we keep the door locked on any of these benefits and opportunities, solely based on a person's gender and we do serious harm to those people, our whole church, and the world. Those who are discriminated against this way have less self confidence so often put up with far less recognition for their good works. This has a very small good side because works are not why these lay women and lay men do the works and no one gets their egos too puffed up since they are not being recognized much. However, it is more a strong negative as it becomes appropriate to show less respect and less gratitude to such workers, especially female workers, by fellow parishioners and the clergy. Since we give praise, prestige and respect to men only who are ordained doing leadership work, the lack of equal respect from unequal ordination results in pure and extremely harmful sexism towards women only. Misogyny has done enormous damage to our church and world throughout our history. We simply must end our gender bias and hate driven ordination practices now or admit that following Jesus Christ is not now, nor really ever was our first priority. In doing so we break both of Christ's only and most important commands - 1. to Love God above all else, and 2. to treat all our neighbors with the same love and treatment we would want, if we were in their situation.