In Peru, Pope Francis says the church stands with the peoples of the Amazon and the earth 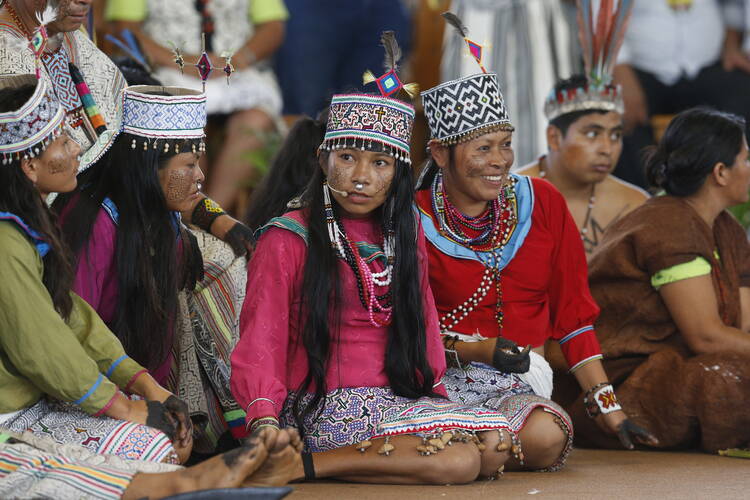 Young members of an indigenous group from the Amazon region listen during a meeting with Pope Francis during a Jan. 19 meeting at Madre de Dios stadium in Puerto Maldonado, Peru. (CNS photo/Paul Haring)

From Puerto Maldonado in Peru, “the gateway to the Amazon,” Pope Francis denounced the fact that “the native Amazonian peoples have probably never been so threatened on their own lands as they are at present,” and said the Catholic Church “stands together” with them in “a whole-hearted option for the defense of life, the defense of the earth and the defense of cultures.”

Francis is the first pope to come to the Amazon region, and he insisted that his first event and major speech of his three-day visit to Peru, a majority Catholic country of 31 million people, should be to this place. He wants to bring to the world’s attention what he sees as a very great danger, first and foremost to the native peoples of the Amazon but also to the future of planet earth and its inhabitants.

Four thousand representatives of the different native peoples of Amazonia gave Pope Francis a tremendous welcome when he entered the Coliseo Regional of the Madre de Dios region, a covered stadium in the south of Peru on Friday morning. They greeted him with cheers, shouts, drumbeats, the sound of horns and enthusiastic applause and a performance of their traditional dance and music. They chanted “Papa Francisco, amigo, la selva es contigo.” (“Pope Francis, friend, the jungle is with you”), a chant heard many times thereafter.

Francis is the first pope to come to the Amazon region.

Eight of them read testimonies or statements witnessing to the destruction of their lands, the death of their animals and plants, the pollution of their rivers and water resources and the toll it is taking on their lives and their culture, and their fears for the future.

He told them he had longed for this day and thanked them for coming and “for helping me to see closer up, in your faces, the reflection of this land” and praised God for the “marvelous handiwork in your Amazonian peoples and for all the biodiversity that these lands embrace!”

Then referring to “the deep wounds” that these peoples and the Amazonia bear, Francis told them “I wanted to come to visit you and listen to you, so that we can stand together, in the heart of the Church, and share your challenges and reaffirm with you a whole-hearted option for the defense of life, the defense of the earth and the defense of cultures.”

Francis then launched into a powerful denunciation of the threats and dangers in this whole region. “There is neo-extractivism and the pressure being exerted by great business interests that want to lay hands on its petroleum, gas, lumber, gold and forms of agro-industrial mono-cultivation.”

On the other, “its lands are being threatened by the distortion of certain policies aimed at the ‘conservation’ of nature without taking into account the men and women, specifically you, my Amazonian brothers and sisters, who inhabit it.” Moreover, he said, “we know of movements that, under the guise of preserving the forest, hoard great expanses of woodland and negotiate with them, leading to situations of oppression for the native peoples; as a result, they lose access to the land and its natural resources.”

“I wanted to come to visit you and listen to you, so that we can stand together, in the heart of the Church."

Noting that “these problems strangle her peoples and provoke the migration of the young due to the lack of local alternatives,” Francis issued a call to action: “We have to break with the historical paradigm that views Amazonia as an inexhaustible source of supplies for other countries without concern for its inhabitants.”

Francis came to understand more fully these challenges and threats during the assembly of the Latin American Bishops’ Conferences (CELAM) at Aparecida in 2007, and as pope he wrote an encyclical on the protection of creation—“Laudato Si’” in 2015. He has also called a special assembly of the synod of the world’s bishops dedicated to the Pan-Amazonian region for October 2019, and the secretary of the synod of bishops, Cardinal Baldisseri, and the president of the church’s network for the Amazon region (REPAM), Cardinal Cláudio Hummes of Brazil, were present in the stadium.

He told the native peoples of the Amazon, “we know of the suffering caused for some of you by emissions of hydrocarbons, which gravely threaten the lives of your families and contaminate your natural environment.”

Then addressing world public opinion and the international community, Francis denounced the existence of “another devastating assault on life” to the peoples of the Amazon “linked to this environmental contamination favored by illegal mining” which is “human trafficking: slave labor and sexual abuse.” He said, “violence against adolescents and against women cries out to heaven.” He appealed to believers and people of good will, “let us not look the other way,” and remarked, “there is greater complicity than we think. This issue involves everyone!”

As part of this “defense of life,” Pope Francis said the church has also made a “basic option for the life of the most defenseless,” namely the peoples referred to as “Indigenous Peoples in Voluntary Isolation,” who are “the most vulnerable of the vulnerable.” While “their primitive lifestyle made them isolated even from their own ethnic groups” and “they went into seclusion in the most inaccessible reaches of the forest in order to live in freedom,” Francis appealed to believers and people of good will to “continue to defend these most vulnerable of our brothers and sisters.”

He said “their presence reminds us that we cannot use goods meant for all as consumerist greed dictates,” and he insisted that “limits have to be set that can help preserve us from all plans for a massive destruction of the habitat that makes us who we are.”

He called for “the recognition” of these peoples, and said “we need urgently to appreciate the essential contribution that they bring to society as a whole” because “[t]heir cosmic vision and their wisdom, have much to teach those of us who are not part of their culture.”

He denounced the spread of diseases that could be prevented but around which there is “a deafening silence.” He called on the Peruvian stage to take action here. He also denounced programs that involved the sterilization of women, even unknown to the women themselves.

Moving from denunciation to proposals, Francis called for the creation of “institutional expressions of respect, recognition and dialogue with the native peoples, acknowledging and recovering their native cultures, languages, traditions, rights and spirituality,” and “an intercultural dialogue” in which they would be “the principal dialogue partners, especially when large projects affecting your land are proposed.” He insisted that “recognition and dialogue will be the best way to transform relationships whose history is marked by exclusion and discrimination.”

He acknowledged the “promising initiatives” that have arisen among the indigenous communities that advocate that the native peoples themselves be “the guardians of the woodlands.” And he told them, “if, for some, you are viewed as an obstacle or a hindrance, the fact is your lives cry out against a style of life that is oblivious to its own real cost. You are a living memory of the mission that God has entrusted to us all: the protection of our common home.”

He recalled how five centuries ago Saint Turibius had denounced the “great wrongs and acts of coercion” done against these people, but said that sadly the same is happening today. Francis said the prophetic word of those men of faith and of the native people like Hector and Yèsica who had spoken earlier “are the cry of this people, which is often silenced or not allowed to speak.” He said “that prophecy must remain alive in our Church, which will never stop pleading for the outcast and those who suffer.”

He called on the government to make “schooling and education for the native peoples” a “priority and commitment of the state,” but one that “recognizes, respects and integrates their ancestral wisdom” as María Luzmila, a representative of the first peoples had said earlier. Peru’s president was in the audience listening.

Francis encouraged the bishops of the Amazon region “to continue, as they are doing even in the remotest places in the forest, to encourage intercultural and bilingual education in the schools, in institutions of teacher training, and in the universities.” And he praised the efforts of the Amazonian Church in Peru helping the native peoples.

He recalled that “many missionaries, men and women, have devoted themselves to your peoples and defended your cultures” and told them “they did so inspired by the Gospel.” And he appealed to them, “do not yield to those attempts to uproot the Catholic faith from your peoples.”

He assured them that “the Church is not alien to your problems and your lives, she does not want to be aloof from your way of life and organization.” On the contrary, “We need the native peoples to shape the culture of the local churches in Amazonia” and “to shape a Church with an Amazonian face, a Church with a native face.” In this spirit, he added, “I have convoked a Synod for Amazonia in 2019” and announced that there would be a pre-synod meeting here so they can give their input.

He concluded by telling them, “I pray for you, for this land blessed by God, and I ask you, please, not to forget to pray for me. Many thanks!  Tinkunakama (Quechua: Until we meet again).”