In Iquique, Pope Francis calls on Chileans to show hospitality to immigrants 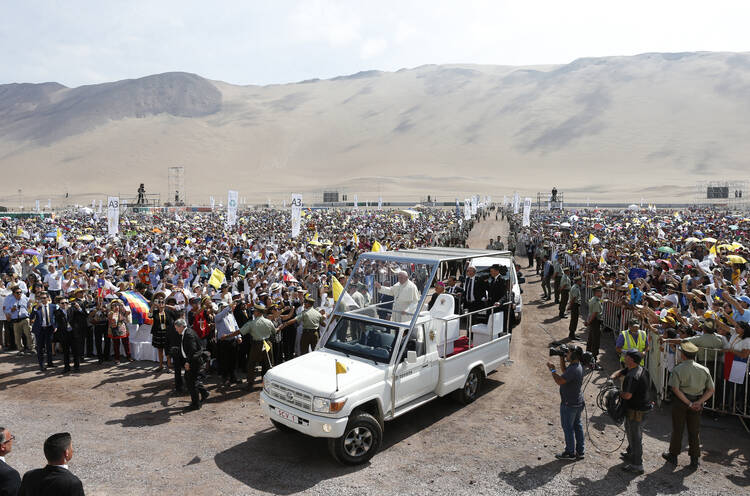 On his last day in Chile, Pope Francis focused on the situation of immigrants. He traveled to Iquique, in the north of the country, and called on believers in this majority Catholic country of almost 18 million people, and those living here, to welcome the immigrants, to be attentive to their needs and to show them “joyous hospitality.

In Iquique 10 percent of the population are migrants. Indeed, Chile is the Latin American country that has accepted the most migrants; they come from Bolivia, Peru, Paraguay, Haiti and, most recently, from Venezuela. Their presence provides a big challenge to the country, as Father Fernando Montes, former rector of the Alberto Hurtado university told America.

“Iquique is a land of dreams (for so its name means in the Aymara language),” Francis told the more than 50,000 people gathered for his Mass.

In Iquique 10 percent of the population are migrants. Indeed, Chile is the Latin American country that has accepted the most migrants.

“It is a land that has given shelter to men and women of different peoples and cultures who had to leave everything behind and set out. Setting out always with the hope of obtaining a better life, yet, as we know, always with their bags packed with fear and uncertainty about the future,” the pope added.

He described Iquique as “a region of immigrants, which reminds us of the greatness of men and women, entire families, who, in the face of adversity, refused to give up and set out in search of life. They—especially those who had to leave their land for lack of life’s bare necessities—are an icon of the Holy Family, which had to cross deserts to keep on living.”

The city of Iquique, founded in the 16th century, lies at the foothills of the Andes. It was part of Peru in the colonial period, but when Chile became a state it took back this region by force in 1879. In this hot and desert climate, the city and area developed rapidly following the discovery of the region’s richness, including copper and vast deposits of sodium nitrates in the Atacama Desert.

The possibilities of work and a better life attracted, and continue to draw, tens of thousands of migrants to this city of 200,000 inhabitants, and the region of Tarapaca. But the extraction of these resources, and worked linked to them, also brought much injustice, exploitation of labor, especially of miners, and human trafficking. All this, as well as the vast number of migrants in other parts of Chile can be seen as the background to the pope’s homily.

Pope Francis began his homily, taking his cue from the Gospel of the day, which tells the story of how Jesus performed his first miracle at the wedding feast of Cana in Galilee when Mary told Jesus “they have no wine,” and then went to the waiters and told them, “do whatever he tells you.

“Like Mary at Cana,” the pope said, “let us make an effort to be more attentive in our squares and towns, to notice those whose lives have been ‘watered down,’ who have lost—or have been robbed of—reasons for celebrating. And let us not be afraid to raise our voices and say: ‘They have no wine.’”

He called on Chilean Christians to “be attentive, then, to all situations of injustice and to new forms of exploitation that risk making so many of our brothers and sisters miss the joy of the party.”

Francis called on them to be “like the servants” at the wedding party in Cana, “let us offer what we have, little as it may seem” and “like them, let us not be afraid to lend a hand.”

Francis appealed to Chileans, and especially Christians, to “make the most of the opportunity to learn and make our own the values, the wisdom and the faith that migrants bring with them. Without being closed to those ‘jars’ so full of wisdom and history brought by those who continue to come to these lands. Let us not deprive ourselves of all the good that they have to contribute.”

In doing all this, he said, “let us allow Jesus to complete the miracle by turning our communities and our hearts into living signs of his presence, which is joyful and festive because we have experienced that God is with us, because we have learned to make room for him in our midst.”

At the end of Mass, he told the crowd that had interrupted his homily with applause several times, “I now continue my pilgrimage towards Peru, a country that is a friend and brother to this great nation of Chile,” and confided that he prayed to the Lord that he would “look at the faith” of the Chilean people “and grant them unity and peace!” He thanked the pilgrims from Bolivia and Peru who had attended his Masses and also the Argentinians, and said to the latter “don’t be jealous.” Then, as he waved goodbye, he asked them, “please, remember to pray for me!

Thus concluded Francis last action-packed day in Chile, which started full of excitement aboard the flight from Santiago to Iquique when he blessed the marriage of two flight attendants. The day continued with the celebration of a colorful, festive Mass enlivened with traditional song and music. It took a dramatic turn as a policewoman fell off her frightened horse as the popemobile passed by. Francis seeing what happened, got off the popemobile and went to be close to the injured woman and stayed there until she was taken away in an ambulance.

He then went for lunch and met the brother of a man who was kidnapped on Sept. 28, 1973 during the military repression under Pinochet and died here in Iquique. The day is scheduled to end at 5 p.m., when Francis bids farewell to Chile and boards the plane for the two-hour flight to Lima, the capital of Peru.

Correction, Jan. 18, 2018: This article initially said Pope Francis tended to an injured policeman. It was a policewoman.