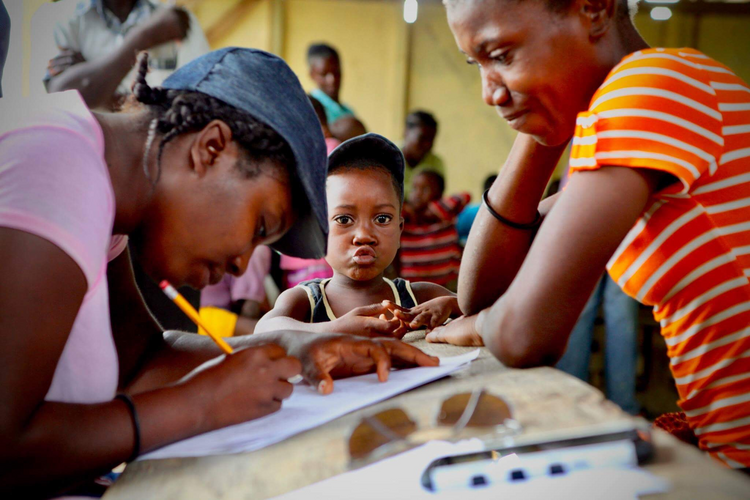 A young boy plays while his mother completes a health survey as part of a latrine building project in a rural community near Léogâne, Haiti. (Photo by Wyatt Massey for Kore Timoun)

For the past five months, Haiti has been my home. Each day—filled with new friends, vocabulary and experiences—challenges the many misconceptions I held about Haiti. Haiti is not a “shithole,” if that is indeed how President Donald Trump characterized it.

The president made this alleged comment the day before the eight-year anniversary of the 7.0 magnitude earthquake here that killed more than 220,000 people.

Haiti is not a “shithole,” if that is indeed how President Donald Trump characterized it.

The president, who told Haitian-Americans during his campaign that he would be their “biggest champion,” has declined to extend Temporary Protected Status for Haitian immigrants who fled from their country after the 2010 earthquake. Come July 2019, nearly 60,000 Haitian in the United States will live under a threat of deportation.

The latest comments sparked outrage, especially among people from the countries singled out by the president. The Haitian ambassador to the United States, Paul Altidor, told NPR the comments were “misinformed” and “ill-advised.”

He added, “Once again, Haiti finds itself in the midst of a very negative narrative here in the U.S.”

As the workday began, I joined my Haitian colleagues ashamed and unable to explain my president’s comments.

Today as the workday began, I joined my Haitian colleagues ashamed and unable to explain my president’s comments. A day already made somber by the earthquake anniversary felt even more dreary. Silence hung over the space usually filled with lively conversations.

Before I could convince them that not all Americans share the president’s sentiments I had to convince myself.

There are problems in Haiti. That fact should not be overlooked. I am in country doing communications work for a nonprofit focused on ending childhood malnutrition. In Haiti, one in five children are malnourished and one in 14 will die before they are 5 years old. After the earthquake, the average Haitian went from eating 2.48 meals a day to 1.58. Much of Haiti lacks health care infrastructure, proper sanitation and a dependable justice system.

An assessment of a country’s living conditions says nothing about the people who live in those conditions.

This is the narrative that most Americans hear. And while these disturbing facts are true, they do not represent the full story. An assessment of a country’s living conditions says nothing about the people who live in those conditions. Crumbling infrastructure, inadequate health care and crippling poverty do not make a life any less valuable. A president and his supporters who stand behind the phrase “All Lives Matter” and advocate pro-life policies should recognize this.

During my first few months in Haiti, I spent many nights doubting my choice to come here. I struggled to adapt to a new culture. There is a different pace of life and new customs to learn. I could leave. Return home. Go back to something more comfortable. Get another job.

But what never fueled the sense of doubt was the social reality I had entered. The very things Mr. Trump likely cited in making his comments about Haiti were the very reasons I had come and the reasons I wanted to stay.

Crumbling infrastructure, inadequate health care and crippling poverty do not make a life any less valuable.

In Haiti, people die of diseases the United States has all but eradicated. Malnutrition destroys lives before they begin, while in the United States parents spend money to help their obese children lose weight.

Compared to my upbringing—where water from the tap was safe to drink, school fees were always paid and Mom was always able to make a doctor’s appointment when I got sick—Haiti can feel like a different world. But it is not. It is the same world; Haiti and the United States are two countries separated by just 700 miles.

I have friends whose journeys abroad challenged their faith. They came face to face with inequality and injustice, then returned to the United States mad at God.

The world needs a more complete picture of Haiti, one extending beyond the simple, dismal narrative heard too often.

“How could God allow this?” they would ask. Or, “How can there be a God if there is this much suffering?”

My journey has been the opposite. The heartbreaking reality and trauma I have witnessed here only deepen my faith. On the eighth day, God did not decide one country should suffer innumerable deaths from treatable disease while another should be overcome by excess. He did not declare one nation’s people would struggle in widespread poverty while the other nation’s citizens enjoy the Super Bowl.

That was us. We did that. Our sin did that.

This is why I stayed. I could deal with the challenges of adapting but not the injustice. I am a human rights journalist. False narratives, bigotry and dehumanizing behavior only underscore my reason for being here. The world needs a more complete picture of Haiti, one extending beyond the simple, dismal narrative heard too often. I want to contribute to that change. I am happy I moved to this country, however my president wants to characterize the place that I now call home.

Wyatt Massey is a human rights journalist in Haiti and a former O’Hare fellow at America.

Did you know that Trump personally supported medical missions to Haiti?

Haven't you mischaracterized what Trump said? Which we only have conflicting accounts. The Catholic Church has a name for such actions.

I think you owe Trump an apology and revise your article.

As an aside, what Haiti needs is the culture and rule of law and economic system of the United States which you can be a small part in providing while living there. Maybe we should have a program of repatriating the Haitians here to spread this culture, rule of law and economic system. Then maybe Haiti would approach their neighbor on the same island, The Dominican Republic, in terms of stability .

Ellen B
3 years 6 months ago

Query: Does making a tax deductible charitable contribution assist in getting a camel through the eye of a needle? Breitbart thinks so.