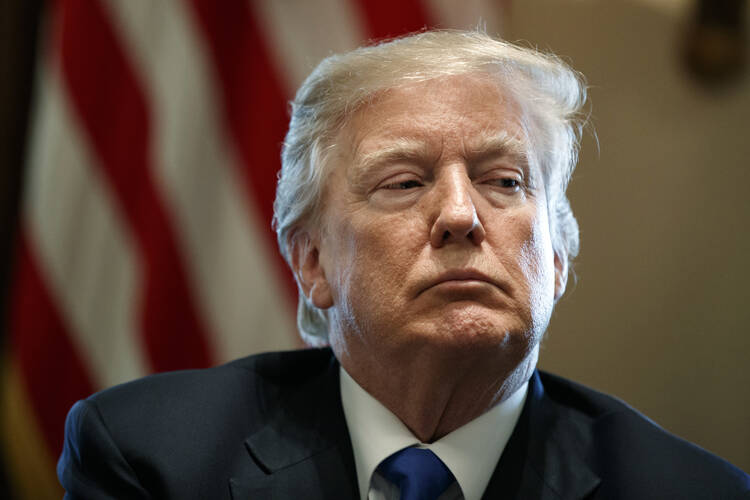 In this Jan. 9, 2018, file photo, President Donald Trump listens during a meeting with lawmakers on immigration policy in the Cabinet Room of the White House in Washington. Trump used profane language Thursday, Jan. 11, as he questioned why the U.S. should permit immigrants from certain countries, according to three people briefed on the conversation. The White House did not deny the comment. (AP Photo/Evan Vucci, File)

In its continuing coverage of the U.S. immigration debate, the Vatican newspaper noted media reports that President Donald Trump "used particularly harsh and offensive words about immigrants" from several countries.

"No agreement on Dreamers" was the headline on the lead story for L'Osservatore Romano's edition dated Jan. 13 and published late Jan. 12.

In the past few days, the paper reported, "the tension on the theme of immigration has risen noticeably" with Trump and a bipartisan group from Congress meeting Jan. 11 to discuss a measure that would keep the Deferred Action for Childhood Arrivals program intact, but also include Trump's demands for a border wall.

The program, known by its initials DACA, protects from deportation between 700,000 and 800,000 young people illegally brought to the United States as children.

Based on media reports about the meeting, L'Osservatore said, "Trump used particularly harsh and offensive words about immigrants from El Salvador, Haiti and some African countries. The expressions immediately gave rise to controversy and indignation."

The Associated Press and other media outlets reported that, according to people present at the meeting, Trump questioned "why the U.S. would accept more immigrants from Haiti and '(expletive) countries'" in Africa.

While the Vatican newspaper noted that the White House did not immediately deny the remarks, Trump later tweeted, "The language used by me at the DACA meeting was tough, but this was not the language used."

The Vatican newspaper also noted that a U.S. District Court judge in San Francisco temporarily blocked Trump's decision to rescind DACA and that the U.S. Department of Homeland Security announced Jan. 8 that it was ending a provision called Temporary Protected Status for some 200,000 citizens of El Salvador currently in the United States.

The individuals I work with who have come from African nations are highly educated & well respected within my company. The individuals who came from African nations who assisted my mother in her nursing home as she suffered from Alzheimers were kind & gentle & treated my mother with respect. The nations from which they came must be doing something right. I am aware of the same reaction being applied to my relatives when they came from Ireland during the famines in Ireland. The ignorance that is shown in one of the highest positions in this land is both insulting & frightening.

Such comments are insulting and frightening. Yet many Americans have been talking like this about Muslim and Middle Eastern countries/people for years.Trump got elected on such bigotry . His policy of banning people fleeing wars and persecution, [ standard reasons for immigrants to come here historically] from such failed states are in place now. What is it to say that people from failed states where no proper vetting can occur should be banned but a policy of ; we don't want those people from those type countries here. The American people elected Trump on this stance. The outrage now is that Trump did not limit his denigration of people to middle eastern countries and Muslim people. Americans have always been talking like this about groups of people/countries. Colter, Hannity, O Reilly, Fox, the internet blogs, right wing radio, politicians, even Obama called Libya that word. This is standard for Americans to talk and think like this about one group/ country or another. The fire storm is that he aired the xenophobic American bigotry dirty laundry by expanding the repertoire of people/ countries denigrated. He did not stick to the acceptable program of people countries you can insult.

Years ago, I worked in a group home with disabled men. Several of my co-workers were immigrants from Liberia, who had fled to our country to escape a brutal civil war. They were good, caring workers with the disabled men. I now live in a nursing home, and more than a few of the staff are immigrants from Africa, including several from Liberia. Again, they are generally caring, dedicated nurses and aides. I'm a former long-time Democrat of more than 25 years (I 'm 55) who reluctantly registered as a Republican several years ago although I frequently disagree with positions typically espoused by Republicans. I believe that the violence of legal abortion, which kills almost one million innocent unborn human beings in our nation for any reason up until the time when the unborn infant (fetus-- which means "young one" in latin) is viable is of paramount importance. So, I reluctantly voted for President Trump. However, he must certainly apologize for his offensive remarks. In 2020, although I won't vote for any candidate who favors legal abortion, I may abstain from voting for President unless Trump substantially alters his views regarding immigration. If he doesn't do so (and unfortunately, I don't expect that he will) I will for the first time in 40 years not vote for president. I can only hope that the Republicans nominate a pro-life candidate for president who has more moderate views on the major issues of our day.