Bethlehem in 2017 is not the place of Christmas carols 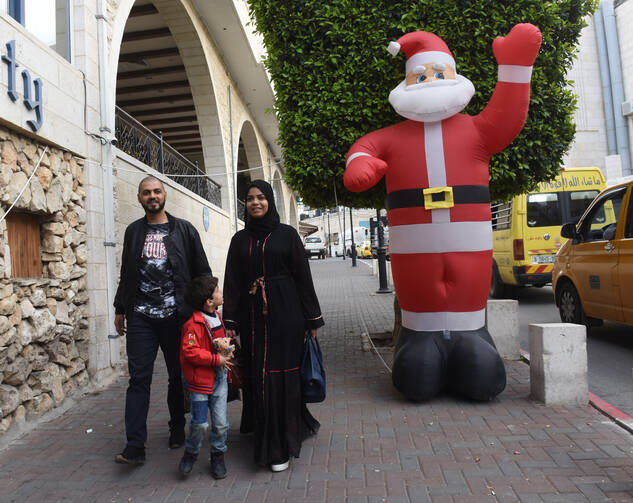 In the wake of President Trump’s recognition of Jerusalem as the capital of Israel, a trip to Bethlehem is definitely in the gray area—not quite forbidden but certainly not encouraged. Various Palestinian groups have called for “days of rage” in response, and no one is quite sure what form this might take. But we cannot resist seeing the little town at Christmas time.

Our driver, Victor, is a Greek Catholic who reassures us that this is no big deal. He has family in Bethlehem, and they will show us around. Relax.

We cannot resist seeing the little town at Christmas time.

Arriving at Bethlehem’s Manger Square is hardly a dream come true, but then again, where do such dreams originate? From misty childhood Christmas carols, I suppose. At any rate, the reality is drab and shabby. We are brought immediately to Farad, an unspecified “relative” of Victor, an elderly gentleman whose dyed jet black hair makes him look younger than he is.

When we attempt to linger in the square, Farad makes it clear that this is a choreographed affair. We must first proceed to the Church of the Nativity; we hastily comply. Upon arriving, we discover a sizable tourist group waiting to see the main attraction, the birthplace of Jesus. Farad utters something to the other guide and whisks us ahead of the group, clearly delighted with his cleverness. Feeling slightly guilty but not enough to turn down this chance, we cut ahead of those who have been waiting.

The place of Christ’s birth is not a meditative, prayerful place—at least not for us.

The place of Christ’s birth is not a meditative, prayerful place—at least not for us. Hardly do we identify the spot—marked with a polished silver star on the floor of a candlelit enclave—then Farad insists on taking our picture. I keep thinking that this should be a special, private moment, but all I can think about is about how I look through the camera lens as Farad gives us repeated instructions on how to pose. How’s my smile? Natural enough? Will the kids think we’re having a good time? And then there is the press of the crowd waiting for us to move on. Lacking in imagination and presence of mind, I utter a half-hearted Our Father.

Farad insists on telling us the entire history of the Church of the Nativity in painfully broken English. But after almost 10 days of ad hoc history lessons, I just do not have the patience. Instead, I gaze back at Christ’s birthplace, trying to remind myself where I am, and why I am here. I see a woman kneeling there. She unpacks a bag full of rosaries and proceeds to rub them methodically over the spot bordered by the ornate silver star. She repeats the process with another batch of religious articles, each wrapped in its own cellophane package before carefully repacking her large purse.

I gaze back at Christ’s birthplace, trying to remind myself where I am, and why I am here.

When we emerge from the crypt, Farad espies a guy he identifies as a priest who is furtively distributing small slips of white paper. Did we want him to pray for anyone in particular? All we need to do is write their names on this piece of paper. We had done something similar at the Western Wall a few days prior to this; standing cheek by jowl with hundreds and hundreds of others yearning and seeking and imploring was inexpressibly moving. Same thing here?

Farad’s timing is once again flawless. Just as he hands over the slip of paper on my behalf, he explains that it is customary to offer money in return for the favor of prayer. The priest (if he is one) seems not particularly grateful for the 20 shekels I ambivalently part with.

Outside, the day is as gloomy as my mood. We see no other Western tourists—the mainstay of the Bethlehem economy—and perhaps we should be grateful for this reprieve from the throngs we encountered in the Old City. The few groups we do see are from Africa. They are the most reliable, Farad explains, willing to cross into Palestinian territory to see the holy sites regardless of the security risk. Even during the intifada, he chuckles.

At this time of year, these narrow streets should be bustling with tourists.

But they are not enough to sustain the local economy. At this time of year, these narrow streets should be bustling with tourists. But except for locals and the shopkeepers, who are hawking hand-carved olive wood nativity figurines in all shapes and sizes, there is virtually no one out and about. We become the target of every merchant’s peddling.

Then I hear them. The Nigerian tourists, all marked with bright green attire, have begun to sing. Without instrumental accompaniment or any kind of announcement, they sing a hymn that resonates within these cold, damp walls—the first sign of real spiritual life I have sensed in Bethlehem.

I have switched my loyalties entirely now, abandoning our guide in favor of the Nigerians. Out of nowhere a beautiful female voice breaks the silence, leading a song in which the rest quickly join, while allowing her a solo performance at regular intervals. We are transfixed: The group emanates a warmth and joy I have not experienced since coming to the Holy Land over a week ago.

The Nigerian tourists have begun to sing—the first sign of real spiritual life I have sensed in Bethlehem.

Farad wants us to move along, but the Nigerians are at it again, this time extemporizing with the heartwarming song, “Sing it in the chapel”—familiar to us from the Sidney Potier version in “Lillies of the Field  .” A mellifluous male voice, rich as Potier’s own, prompts his fellow pilgrims to “sing it at the Christmas,” and they beautifully oblige with the well-known chorus response of three “amens.” Christmas has come to Bethlehem.

We are deeply happy—at least for a few moments, for now Farad is dragging us on to a shop. Yes, this little “tour” will inevitably end at his relative’s souvenir shop, and we will not emerge from his clutches without having bought a beautiful (and hugely overpriced) olive wood crèche. But we are full conspirators in this commerce, for we, too, have come to buy our bit of Bethlehem.

We are full conspirators in this commerce, for we, too, have come to buy our bit of Bethlehem.

Our merchant tries to console us for the price-gouging by bemoaning the fate of the Palestinian businessmen who have fallen prey to President Trump’s new Israel policy. This is a really bad year, he tells us; usually, he claims, his store is brimming with American customers. We are invited to consider our purchase as partial recompense for some of those missing tourists. We are doing a good deed for the Palestinians, he suggests.

Outside, we are not so sure. On the one hand we see a prominent sign bragging that “the American people” (via USAID) are supporting the repaving of major roads in the Palestinian territories. On the other hand we see two large placards in Manger Square announcing—ominously—that Jerusalem is and will remain the capital of Palestine.

A Palestinian Christian explains what it feels to celebrate Christmas in Bethlehem today.
Jeremy Zipple

Farad follows our gaze, and perhaps notes the apprehension in our faces. Don’t worry he says, laughing and touching my arm, “These people don’t hate you, they just hate your government.”

That’s not quite the Christmas message we are hoping for, but it is the one we will have to take with us.

As evening falls—quite early in the Middle East at this time of year—we coast through the border crossing that disrupts the lives of our Palestinian acquaintances for hours on a daily basis, just in time for a great dinner at an upscale Jerusalem restaurant. We are done with Bethlehem for now, but those beautiful, faithful Nigerian voices stay with us.

Correction: A previous version of this article incorrectly attributed the song “Sing it in the chapel” to Harry Belafonte. 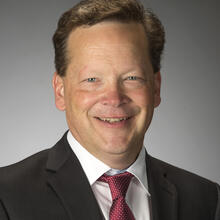 William Collins Donahue is a fellow of the Nanovic Institute for European Studies and the Cavanaugh Professor of the Humanities at the University of Notre Dame, where he serves as the chair of the Department of German and Russian Studies. He would like to acknowledge the Holocaust Education Foundation, and in particular Holocaust survivor Theodore “Zev” Weiss, for sponsoring the study trip that brought him to Israel.

Well, Fared is wrong. I just returned from a truly miserable period of my life, living and working in the Middle East, and I can tell you that MANY Arab Muslims do, indeed, hate Americans, and that part of the reason is our government's championing of the cause of the Zionist occupiers of Palestine, over the rights of the (historically) more indigenous population.

"I can tell you that MANY Arab Muslims do, indeed, hate Americans" -- Many Arab Muslims certainly hate America as a country because of its incessant interference, murder, destruction and abandonment of the middle east in general. However, most of the ones I've encountered are very much able to make a distinction between Americans as individuals and America as an institution/polity. It's an important distinction as when traveling in many countries in the ME/NE, Americans are safe and well treated, especially when they acknowledge the imperfection of their country in regards to its constant interference in the Middle East, often resulting in vast destruction and death. To be completely honest here, too, we should mention that it's not Arab Muslims who hate America and its actions, but also Arab Christians, Catholics, Orthodox, Zororastrians and people of many traditions. No matter how much people want to turn it into a Christian Vs Muslim thing, the reality is that it's more about politics and interference than it is about religion. It just also happens that those fractures sometimes also run along religious lines (primarily because they run along cultural lines).

I agree with you that it is not exclusively Arab Muslims who hate America, but I have to tell you that, many times, when I have protested that most Americans are not responsible for America's depredations against the societies of the Middle East, my acquaintances there have bluntly reminded me that we are a representative democracy, which means that the voting population are, indeed, responsible for what their government does.