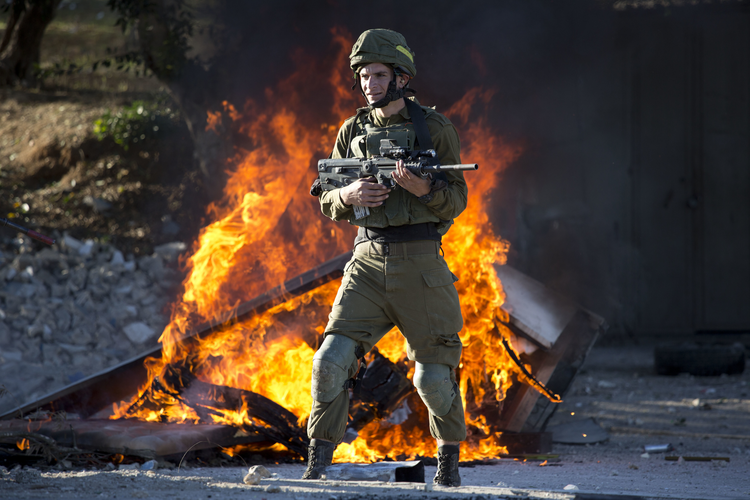 An Israeli soldier stands during clashes with Palestinians following a protest against U.S. President Donald Trump's decision to recognize Jerusalem as the capital of Israel in the West Bank City of Nablus on Dec. 8. (AP Photo/Majdi Mohammed)

The Vatican made it clear in a statement released today that Pope Francis is profoundly concerned at the downward turn of events in Jerusalem, the Holy Land and the Middle East, and the risk of “a new spiral of violence” there after President Donald J. Trump declared that Jerusalem is “the capital of Israel” and announced that the United States would move its embassy there from Tel Aviv.

The pope expressed “sorrow” at the clashes that have already “produced victims”—a reference to protests that have left at least two dead and dozens injured in the wake of the president’s statement. He appealed yet again “to everyone” to show “wisdom and prudence” and “raise fervent prayers so that the leaders of nations, in this time of special gravity, commit themselves to avert a new spiral of violence” in the Holy Land, and respond “with words and deeds to the desires of peace, justice and security for the populations of that battered land.”

The statement was released shortly after noon on Sunday and said the Holy See is following “with great attention the developments of the situation in the Middle East, with special reference to Jerusalem, a sacred city for Christians, Jews and Muslims from all over the world.”

It said the Holy See is “attentive” to the “various initiatives” taken in recent days, including the urgent meetings called by the Arab League and the 57 member-states of the Organization for Islamic Cooperation, that reflect “concerns about the [prospects] for peace in the region.”

The Vatican reiterated its “well-known position concerning the singular character of the Holy City and the essential need for respecting the status quo."

The Vatican statement recalled Pope Francis’ statement last Wednesday in which he insisted on respect for the “status quo” in Jerusalem. It also reiterated the Holy See’s “well-known position concerning the singular character of the Holy City and the essential need for respecting the status quo, in conformity with the deliberations of the international community and the repeated requests of the hierarchies of the Churches and Christian communities of the Holy Land.”

It concluded by saying, “the Holy See reiterates its own conviction that only a negotiated solution between Israelis and Palestinians can bring a stable and lasting peace and guarantee the peaceful co-existence of two states within internationally recognized borders.”

Sources in the Vatican told America they cannot understand how President Trump’s statement and decision can be in the best interests of the United States, given that it has alienated its European allies and the Arab and Muslim world. They said they pray and hope that “wisdom and prudence” will prevail to avoid a new cycle of violence that can be in nobody’s interest.