A Palestinian Christian explains what it feels to celebrate Christmas in Bethlehem today. 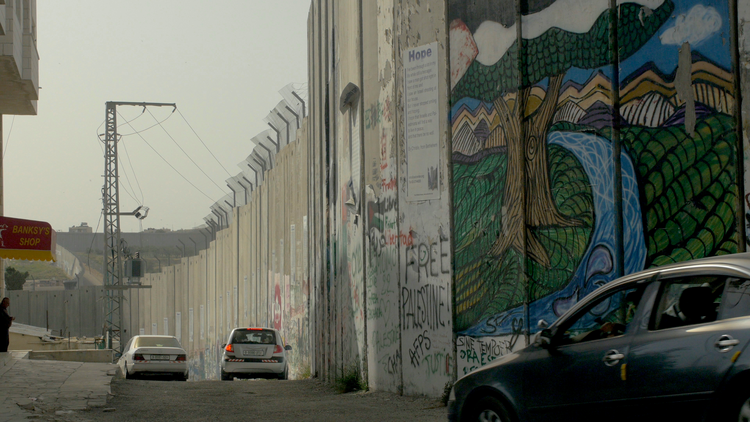 The teenage mother gives birth in a stable, exposed to the elements, enveloped in manure. She is a five days’ walk from family back home in Nazareth who might support her through this exhausting moment. The birth of Jesus, as recounted in the Gospels, hardly resembles the romanticized tableau of crèche figurines and Christmas carols.

And it was politics that put Mary in such a position. The Roman Empire occupied Palestine, the homeland of the Jewish people, and had ordered Mary and Joseph to Bethlehem for a census to ensure every tax dollar owed was accounted for. Roman occupation is the ever-present political background of the Gospel narratives, and Jesus’ era—scholars call it the “Second Temple Period” of Judaism—was a sad ordeal for the Jewish people. They were refugees in their own land, struggling at how to best respond to their Roman overlords. Some opted for accommodation—the Hasmoneansand Herodians—and fared well for themselves; others resorted to violent resistance—the Zealots—and Rome responded in kind by slaughtering them en masse.

For Christians living in 21st-century America, the bleak political realities of living in occupied territory seem as long ago and far away as the Christmas story itself. But for the Christians who today inhabit Jesus’ homeland, life is in many ways just as precarious as it was for Mary and Joseph. Once again, everyday Palestinians are swept up by political forces mostly beyond their control. The Israeli occupation of Palestinian territory, which includes the ancient city of Bethlehem, is in its fifth decade. And the undercurrent of violence and disregard for international law inherent in any lengthy military occupation is readily apparent on both sides. The situation feels intractable; there’s no discernible path forward towards a peaceful resolution.

As the occupation continues, the situation for Palestinians Christians grows bleaker by the day. Consider these numbers: For much of the 20th century, Christians comprised the majority of Bethlehem’s inhabitants.  But by 2008, they had dropped to 28 percent. Today, many estimates put Christians at less than 15 percent of the city’s population. And they keep fleeing Bethlehem, a city of 22,000 inhabitants, at a rate of dozens of families per year.  It is an exodus of extraordinary magnitude, and it raises the question of how long it will be before no Christians are left to celebrate Christ’s nativity in the town of his birth.

I felt obliged to write this piece after receiving emails in the past week from three separate Palestinian friends, all of them Catholic, all living either in Bethlehem or in nearby Jerusalem. All three said basically the same thing: the mood here is bleak; we are struggling. The dark mood is precipitated by a three-month wave of violence that has left 127 Palestinians and 20 Israelis dead since September.

What’s more, Palestinian Christians feel like the rest of the Christian world is ignorant of the challenges they face. I sat in a tour bus this past April with several dozen Christian pilgrims from the States, first-time visitors to the Holy Land. The bus was stone silent as we passed through the towering 26-foot security wall, erected by Israel, that has encircled Bethlehem since 2003. Passing through its heavily-armed checkpoints feels like “entering a prison,” as one pilgrim put it. “I had no idea it was like this here,” he remarked.

The political situation is complex. Israel believes the wall is necessary to protect its citizens against acts of terrorism; Palestinians—Christians and Muslims alike—despise the wall, saying it’s made them prisoners in their own homes, preventing them from finding work and living life with any degree of normality. 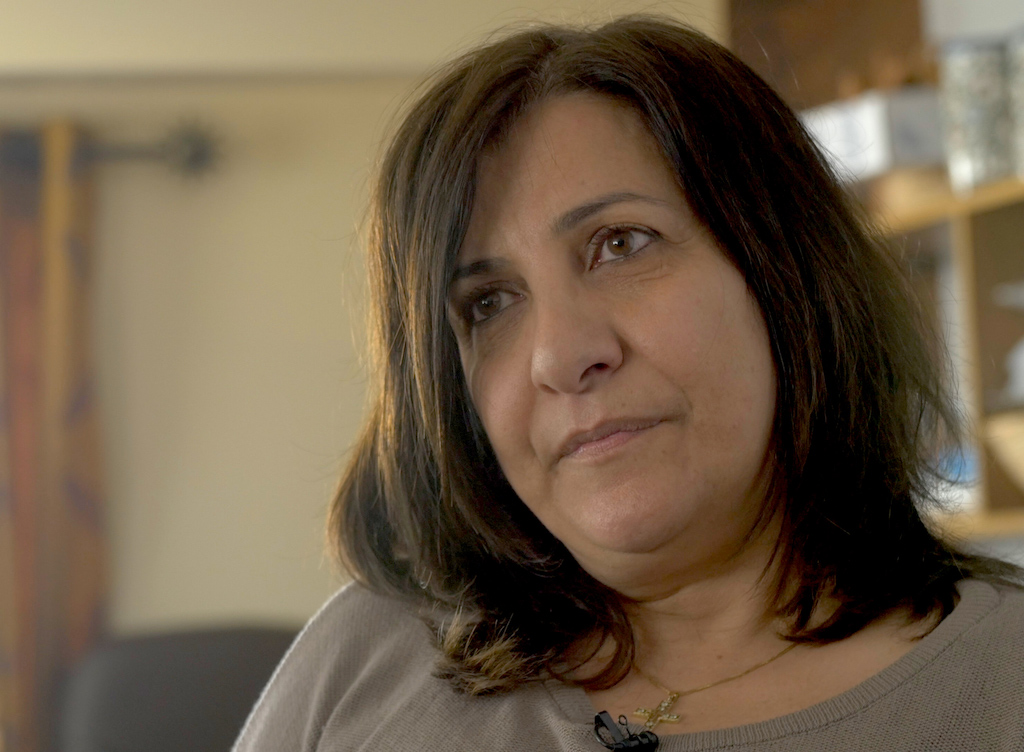 It is not my intention to weigh too deeply into these complex debates but simply to give readers a feel for what it’s like to be a Christian in Bethlehem today. This day. Christmas, 2015. I got on Skype on Christmas Eve with one of those friends who’d emailed, Basima Barham. She’s a Palestinian and a Catholic with ancient roots in Bethlehem. She’s also a mother, a wife and a college-educated professional who runs an NGO that assists poor Christian craftsmen in Bethlehem who eke out a living making religious articles for pilgrims.

I’ve interviewed and befriended scores of Palestinian Christians over several visits to the region. And I offer you Basima’s reflections because they are typical of a Palestinian Christian. Yet, there’s another sense in which Basima is far from typical: She’s chosen to stay. She’s one of the handful of Christians in Bethlehem who has not fled her homeland—for the moment, anyhow.

You are a Palestine and a Christian. Many people don’t realize those two labels go together. Tell me a bit about your identity.

I am proud to be Palestinian. Palestine means a lot to me. To be in a place very near where Jesus was born means a lot to me because we are Christian. My husband is Orthodox. I am a Catholic. I grew up Catholic, went to Catholic school.

It’s Christmas Eve. How do you celebrate Christmas in Bethlehem?

Just now we were in the Church of the Nativity [situated on the spot where tradition holds Jesus was born]. We were in the church for prayers and singing. It’s always a big celebration. It’s a very special night for all the Christians in Bethlehem. We have processions in the streets. But much less now because of the violence. Tonight, the family will all get together for a big dinner. Santa Claus will come today and tomorrow as well to bring some gifts for the children.

You told me in your email that this Christmas feels “very different”? What did you mean?

I was born in Bethlehem and I am now 52 years old. I have never seen it like this. You know, we always have political problems here. But this year it is really different. Everyone is saying the same. I don’t know why. We’re all asking: Why is this year different because we always have problems?

So what precisely is different?

There are no pilgrims this year. We always have political problems here, but for some reason, the pilgrims have not come this year. We’re looking for the buses filled with them, and there are none. It’s really a problem because the Christians in Bethlehem make their livelihood on pilgrims—making crafts, religious souvenirs. We are dependent on them.

But it’s not just about the economy. The pilgrims give us a kind of feeling that: We all believe in God, we are all sharing this together in the place where Jesus was born. But when you look to your left and your right and you see none, you feel like you are becoming more and more alone. It’s very sad. The situation is changing here. Christianity is getting less and less, and people are really afraid. We don’t know what’s coming next.

There has been a lot of violence in the past three months—127 Palestinians dead. 20 Israelis. This also affects the mood, I’m sure?

In 1990, Bethlehem was a majority Christian town. Today, by many estimates, Christians make up less than 15 percent of the population. Have you ever contemplated emigrating yourself?

Of course. Now, you can count on your hand the number of Christians. In the West Bank as a whole, in 2015, Christians are down to 0.5 percent of the population.

A month ago, I was very afraid about the situation here. I had a feeling Israel might send soldiers in. Like in 1948 [during the 1948 Palestinian exodus, the Nakba.] Then, they took away the houses of many, many Palestinians. I thought this time it might happen again in Bethlehem. I told my children to have their passports and some money in a safe place and be ready of flee in case the Israelis did come.

I think that is the only situation that would make me emigrate. Because I would not be able to go on living if I have to be in an occupied city with soldiers everywhere.

But really, I feel that I must stay because I must try to save this place. I don’t want to imagine that one day Palestine would be without Christianity. So in my work, I am trying to help Palestinians find work, speak up for their rights, find ways of keeping our people here.

What’s the relationship like between the Christian and Muslims communities in Palestine?

Here in the Bethlehem area, it’s very good. We live together and we have a very good situation. We are one. We are all Palestinians. For sure, you can feel a difference in the cultures — or within the religions itself. But the most important thing is that we respect one another. They respect me. And I respect them. Of course there is some fanaticism among Muslims. And of course, we are not able to speak with those people. It’s a problem.

And what about the relationship between Palestinian Christians and Israel?

I feel the problem with Israel is this: They can do whatever they want, and no one outside can tell them not to do something. Whether it’s about human rights violations or taking more land for settlements, no one can tell them anything. They do what they want. Even now, they’re grabbing another section of the Bethlehem region for settlements—the Cremisan Valley. It’s an area where Christians are the majority landowners, and Israel is taking it now for new settlements. They’re building a wall which will block Christians from getting to their lands. It’s a clear violation of international law—even the Vatican has told Israel they must stop.  But Israel will listen to no one.

The political situation is incredibly complex and difficult. What would you say it the biggest factor behind all the tensions?

I think it’s fanaticism in the religions. Here we are Christians, Muslims, and Jews. Each group wants to say: I am the best. I am different. And each year, there is more fanaticism. Muslims of course. Among Israelis, they’re telling people that this is the Promised Land. It’s land for the Jews alone. For me, Christian faith is a peaceful, docile way to be with God. To feel his presence and protection. But for sure there are Christian fanatics, too.

So amidst this bleak Christmas in Bethlehem this year, do you see any cause for hope?

Yes. Because I trust in God. I have hope that one time we will be able to be free, that we will have our rights as human beings, that some day we will again all celebrate Christmas here as one, with Christians from all over the world.