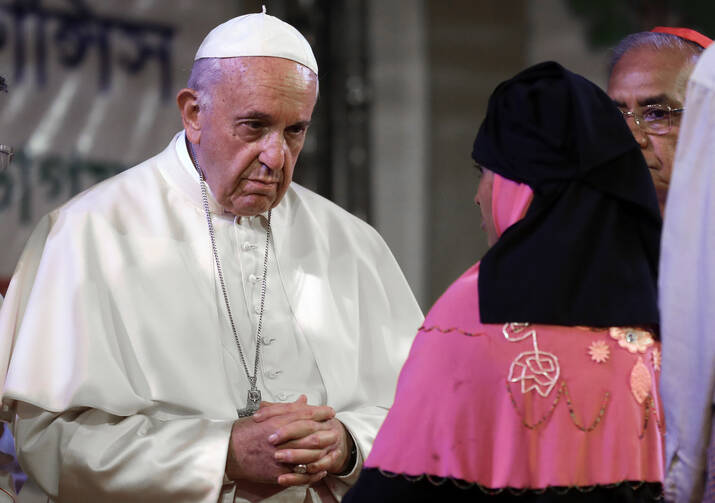 Pope Francis meets Rohingya Muslims refugees from Myanmar during an interfaith and ecumenical meeting for peace in the garden of the archbishop's residence, in Dhaka, Bangladesh, Friday, Dec. 1, 2017. (AP Photo/Andrew Medichini)

“The presence of God today is also called Rohingya,” Pope Francis declared in Dhaka today after meeting 16 Rohingya refugees and listening to each one’s tragic story. As he listened, he held the hands of many of them, and at the end spoke off the cuff. He asked them forgiveness for the great evil done to them, and then surprised everyone by using the word that he had been advised never to use in Myanmar—“Rohingya.”

This was the dramatic climax to an evening which began with Francis arriving in a rickshaw in the garden of the archbishop of Dhaka’s house for an ecumenical and interreligious meeting with Muslim, Hindu, Buddhist and other Christian religious leaders. After each of the leaders had spoken, the 16 Rohingya refugees who had come from the refugee encampment at Cox’s Bazar, Bangladesh, 400 kilometers south of Dhaka, were invited to come and meet the pope.

Pope Francis asked for forgiveness Friday from refugees in Bangladesh for all the hurt and indifference they have endured.

The first to go to Francis was a 5-year-old girl and her parents. He bent down and caressed the child and then listened to her parents tell their story.

The next to come forward was a 12-year-old girl, Sahkwat Ara, who is now an orphan, after the Myanmar military killed her mother, father, two siblings and two uncles in their village in Rakhine State on Aug. 8. She had looked traumatized, her eyes carried a fixed gaze and showed no sign of emotion when America and other media outlets met her and the other refugees before the pope’s arrival.

Sahkwat’s uncle, Jafar Allam, 24, who has a bullet-wound in his left arm from the same attack, accompanied her to the pope. Francis put his hand on hers as he listened to her story: his face showed great pain and emotion. And as she moved away, he put his hand on her head again.

After listening to each one of the refugees, Francis responded spontaneously, speaking in Italian. “We are all close to you,” he said. He told them that “what we can do is little because your tragedy is very hard and great but we give you space in our heart.” Then, speaking “in the name of all those who persecuted you, of all those who did you evil, of the world’s indifference, I ask your forgiveness.”

He recalled that in the Jewish-Christian tradition, “God created man in his own image and likeness. We all are that image. Also these brothers and sisters.” Turning to the other religious leaders present in the hall, he told them, “let us show to the world what egoism has done with this image of God.”

He revealed that “many” of the refugees had spoken to him about “the big heart of Bangladesh which received you,” and said, “I appeal to your big heart that you may be able to grant us that pardon that I ask of you.”

He stated once again that these refugees “are the image of the living God,” and appealed to all believers and people of good will everywhere, “Let us not close the heart, let us not look the other way. The presence of God today is also called Rohingya. Let us continue to stay close to them so that their rights may be recognized.”

After Francis had met all of the refugees, the other religious leaders present shook the hands of each of them. Then Francis stood with the refugees and the other leaders in front of TV cameras and photographers from Europe, the United States and Latin America.

The Rohingya refugees are living in 15 camps at Cox’s Bar, but only 32,000 of them have official refugee status from the United Nations High Commissioner for Refugees. The Bangladesh military control all entry and exit to the camps, and the displaced persons, who are not recognized officially as refugees by the U.N.H.C.R., cannot leave the camps.

More than 600,000 of them arrived here after last August’s brutal military onslaught on their villages and homes in Rakhine state, Myanmar, that resulted in the deaths of many, the rape of women and the destruction of their homes. They joined some 300,000 other Rohingya that were already encamped here following earlier waves of repression.

The Myanmar government has denied any such campaign is underway. The army says “clearance operations” are targeting militants who attacked security positions in August.

Myanmar’s government and most of the Buddhist majority recoil from the term “Rohingya,” saying the members of the Muslim minority are “Bengalis” who migrated illegally from Bangladesh. Myanmar does not acknowledge them as a local ethnic group and will not give them citizenship, even though they have lived in Myanmar for generations.

Francis had refrained from publicly raising the crisis or using the word Rohingya while in Myanmar out of diplomatic deference to his hosts.

Human rights organizations and Rohingya themselves had voiced disappointment at Francis’ public silence in Myanmar, given he had previously denounced the persecution of “our Rohingya brothers and sisters.” The Vatican defended it as diplomatically necessary, and stressed that his silence in public did not negate what he had said in the past, or what he was saying in private.

Some 150 NGOs are working in the camps today offering various kinds of assistance to the refugees. Caritas Bangladesh is one of them. It is caring for 15,000 families, and a total of almost 300,000 refugees according to Bishop Rosario Gervais, the member of the bishops’ conference who is responsible for Caritas.

“Pope Francis was the first world leader to speak out on behalf of the Rohingya, and he asked the church in Bangladesh to help these poor, suffering people who are in dire need,” Bishop Gervais told America on Nov. 30.

He said they were delighted when, in his first speech here on Nov. 30, Pope Francis issued two urgent appeals to the international community: to provide immediate humanitarian assistance to Bangladesh to help it respond to the basic needs of the refugees, and to work with determination for a political solution to this dramatic crisis, which is the worst in Asia today.

Bangladesh’s tiny Catholic community represents a fraction of 1 percent of the majority Muslim population of 160 million. Despite its small size, the Catholic Church runs a network of schools, orphanages and clinics and has enjoyed relative freedom in its work, though Christian missionaries say they have received letters threatening dire consequences if they continue to spread Christianity.

This story has been updated. It includes reporting from the Associated Press.

Thank you Jesus. Thank you Pope Francis. May the peace of Christ be with you.