In Bangladesh, Pope Francis will encounter ‘natural and man-made’ disasters 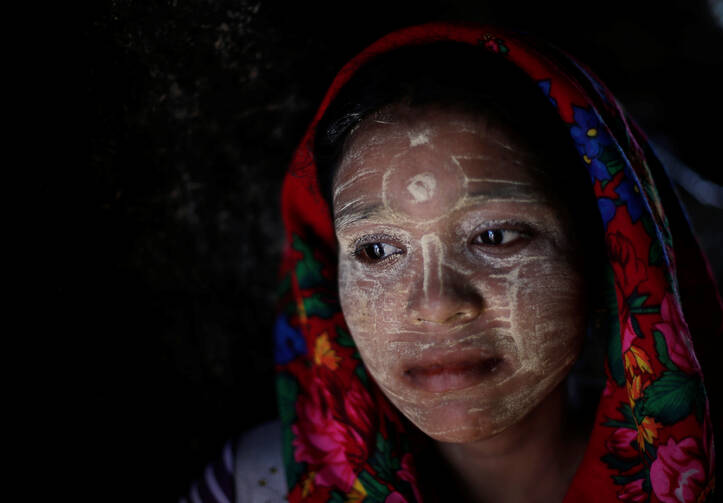 A Rohingya refugee is seen at the Palong Khali refugee camp near Cox's Bazar, Bangladesh, Oct. 23.

Pope Francis will visit Bangladesh, the fourth most populous Muslim country in the world, from Nov. 30 to Dec. 2. “Everyone is for having the pope, everyone is looking forward to his visit,” Cardinal Patrick D’Rozario told America ahead of the pope’s arrival.

He said the country’s president and prime minister as well as Muslim leaders, Catholic bishops and ordinary people are all delighted that he is honoring their country by coming here, just as John Paul II did in 1986. The motto for Francis’ visit is “harmony and peace.”

“Pope Francis is accepted by all the people as a religious leader; he’s seen as a moral leader, and the people are waiting for him,” Cardinal D’Rozario added.

The bishops had identified three objectives for the pope’s visit, he said: “He will come as a pilgrim to the soul of the people of Bangladesh; his visit will be an option for the poor and a recognition of the religious harmony in this country; and for the Christian community [it will be] a confirmation of their faith.”

The pope’s coming “will be a message of hope,” Cardinal D’Rozario said.

His visit will be an option for the poor, for the people of Bangladesh that struggle with the realities of life and have their own identity, culture, heritage and religious harmony,” Cardinal D’Rozario explained. “The poor in this land can be understood in a Gospel way. They have simplicity; they are a God-fearing people who are satisfied with little things.”

But, he added, “They are also people who are also vulnerable because of climate changes.”

He noted that among the poor are “the garment workers and the Rohingyas and other victims of natural and man-made calamities.” The pope’s coming “will be a message of hope for them.”

There are four million garment workers, and most suffer from poor working conditions and low wages. When 1,100 died in a fire in the Rana Plaza complex on April 24, 2013, Francis prayed for the victims and expressed his closeness to their families. His words made a big impact on the country.

“They are also people who are also vulnerable because of climate changes.”

Pope Francis knows about the plight of the Rohingya here and in Myanmar. More than 300,000 of this largely stateless Muslim group lived in Bangladesh even before last August’s repression in Myanmar that caused an estimated 620,000 more to seek refuge in Bangladesh, a country that is one-third the size of Myanmar but whose population is three times as big.

“The Catholic Church in Bangladesh is pleased that Caritas Bangladesh is working for 40,000 Rohingya families—approximately 300,000 people in refugee camps,” he said. The presence of a small church is great in showing love and mercy in response to the “cries of the Rohingyas, cries of humanity.”

On the eve of the pope’s visit to Myanmar and Bangladesh, a glimmer of hope was cast on this tragic situation. On Nov. 23, Bangladesh’s Foreign Ministry announced that following talks between Myanmar’s civilian leader Aung San Suu Kyi and Dhaka’s Foreign Minister A.H. Mahmood Ali, the two countries had reached an agreement for the repatriation to Myanmar of hundreds of thousands of these refugees, and that the process would start in two months. But the details of the process have not yet been disclosed.

The cries of the Rohingyas are the cries of humanity, Dhaka archbishop says
Gerard O’Connell

Notwithstanding the many problems, Cardinal D’Rozario said that Bangladesh has become a model for development in the Third World.

“Ten years ago, 59 percent of the people were living under the poverty line,” he said. “Now it is only 29 percent. This is a big change and the target is to become a middle-earning-income [country] by 2021.”

The cardinal also credited the government with working to advance religious harmony in this Muslim majority (87 percent) country of 160 million. Ten percent of the population is Hindu, and Christians make up a tiny minority of 600,000 faithful. He hopes the pope’s visit “will show the whole world that people of other religions can also live in harmony in a Muslim country.”

Cardinal D’Rozario emphasized that “religious harmony is the hallmark of this country, which came into existence in 1971 after separating from Pakistan following a nine-month war.” He recalled that “when Pakistan was created in the India-Pakistan partition in 1947, harmony was forgotten in some way. But with the creation of Bangladesh in 1971 that harmony, a feature of the culture of Bengali nationalism, was one of the principal criteria for having an independent Bangladesh. Indeed, the country was founded on four principles: secularism, nationalism, socialism and democracy.”

As a state, Bangladesh, the cardinal said, “is secular but secular in a very positive sense, not in the rejection of religion, because it’s a very religious society. Secular for us means that every religion would have its own freedom to practice and to preach. That was the mind of the father of the nation.”

The Holy See was one of the first states in the world to recognize the newly independent Bangladesh, the cardinal recalled. He was the first priest to be ordained after the creation of the new state and became its first cardinal in 2016. He is both archbishop of Dhaka, the capital city with a population of over 18 million people, and president of the bishops’ conference.

The Catholic community is “a tiny flock” of 375,000 faithful, he said. “I would like Pope Francis to confirm the faith of this little flock and give a boost to our witnessing of the faith in the midst of this plural society with all its challenges.”

Though very small, he said the church makes “a big contribution to the country” in the field of education, with its 64 secondary schools and over 1,100 kindergarten and primary schools where 80 to 95 percent of the students are from other religions. The country’s first Catholic university, Notre Dame, was established three years ago. It has three faculties—science, the arts, commerce—and 2,000 students, 95 percent of whom are Muslims.

The church, he added, is “heavily involved with development and charitable work across the country. Caritas is present everywhere, and about 75 percent of the people working in it are Muslims, Hindus and Buddhists. All human values are Christian values: They share those same values. Our dialog is also a dialog of action.

“Being small, the Catholic Church, in doing its ministries, takes the people of other religions as active co-partners, collaborators and colleagues who also share the same universal vision and are committed to develop among people human, cultural and moral values,” the cardinal said. “On average, about 60 to 70 percent of our fellow-workers in our educational, social, health care, charitable and developmental institutions and services, belong to the people of other religions. This is an excellent way of evangelization. People very much appreciate the work we do across the country,” he added.

The church in Bangladesh has been engaged in interreligious dialogue for over 30 years.

He said the church has been engaged in interreligious dialogue for over 30 years, and “now we are happy that the bigger community, the greater community, the Muslims are also taking initiatives, too, in this area. The state is very much involved in promoting religious harmony, too.”

For the last three years, he said, “we have the prayer apostolate: many Christians are making a big contribution by praying for the whole nation, praying for harmony, praying for unity, praying in the church. Most of the time the ministers, prime minister, president say, ‘Please pray for me, pray for me.’”

He hopes that Pope Francis will speak about “Laudato Si’” and the environment, “because the Bangladesh church has to give priority to climate change” and “the government has done a lot of things on its own” but he hopes the pope’s visit “will highlight the example of Bangladesh, how the country is facing this problem on its own, with its struggles and with its farmers who have the wisdom of adaptation to it.” Recently, the United Nations awarded the “Champion of the Earth” award to the prime minister, he added.

The cries of the Rohingyas are the cries of humanity, Dhaka archbishop says
Gerard O’Connell

Pope Francis will arrive at Dhaka International Airport from Myanmar, at 3 p.m. (local time), on Nov. 30. His first afternoon will consist of civic visits: to the National Martyrs’ Memorial dedicated to those who died in the war for liberation in 1971; to the monument of the Father of the Nation, Sheikh Mujibur Rahman, who was assassinated in 1975; and to the presidential palace, where he will be greeted by President Abdul Hamid and address the country’s political and civic authorities and the diplomatic corps.

Next, on Dec. 1, he will celebrate an open-air Mass for about 80,000 people and ordain 16 priests. That afternoon he will meet the prime minister and the Catholic bishops and participate in an interreligious and ecumenical encounter.

“Pope Francis will not be able to move around the city too much because of the traffic in Dhaka, which is horrible,” the cardinal said. Nevertheless, on his last day here, he will visit Mother Teresa’s House of Compassion in the city’s Tejgaon parish, which cares for people with physical and mental disabilities and the destitute. Afterward, he will meet the priests, religious, theologians and seminarians in the Holy Rosary Church, and before departing for Rome he will greet young people representing different religions at the Notre Dame College and University campus.

Oh, here we go again about climate change! Now you might suppose a country as big as New York state with half of the population of the fifty United States of America combined might have a resource loading problem. But let us ignore this and trot out climate change as the source of all problems. A simplistic concept which is wrapped up and topped with a nice neat bow certainly is the strong suit of the man who goes by the name of Francis. Such a pity!