Pre-Bethlehem: How the church can do more for expectant parents 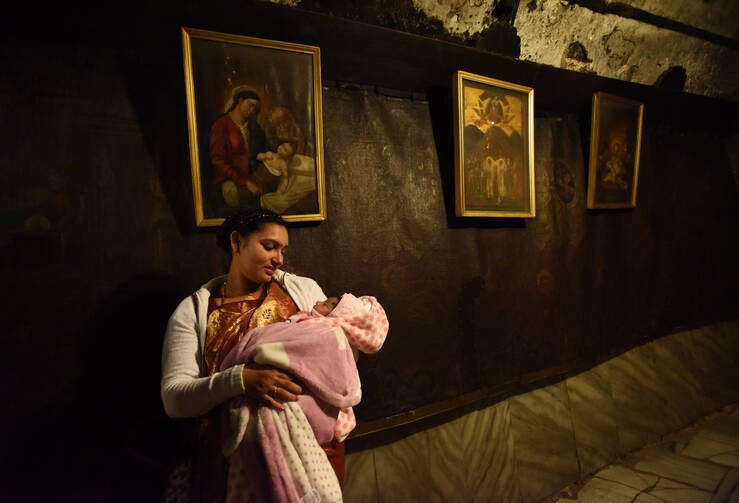 A pilgrim from India holds her baby in front of a painting of the Mary and the Christ Child in the grotto of the Church of Nativity in Bethlehem. (CNS photo/Debbie Hill)

As thousands of families travel for the holidays, Catholics are reminded of the reason to make the trip—the Holy Family’s journey to Bethlehem for the Nativity.

This trek, which would have spanned multiple days during the season we now know as Advent, left much time for Mary and Joseph to think about uncertainties that lay ahead: Will the baby be born before we arrive? Am I ready to be a parent? How can I make sense out of the extraordinary and mysterious circumstances surrounding this conception?

These concerns are certainly spiritual ones, and they raise the question: If Catholic families today have similar uncertainties, do they have a space within the church to be heard? Is the Catholic Church, so vocal about parents teaching faith to their children, falling short in giving couples spiritual preparation for parenthood?

Is the Catholic Church falling short in giving couples spiritual preparation for parenthood?

Recent data suggest that U.S. Catholics need help to prepare for growing a family within the church.

While one could easily speculate that these numbers reflect increasing secularization, it may be that families do not feel prepared to take on household faith formation or simply do not know how.

Calling family the “fundamental cell of society,” Pope Francis has placed family at the forefront of his papacy, convening the meetings of the Synod of Bishops on the family in 2015 and 2016. But the synod’s highly publicized debates over divorced and remarried Catholics seem to have overshadowed discussion about supporting new families. Cardinal Daniel DiNardo, a synod participant, said: “In first-world countries, cardinals will make the statement that we do pretty well in marriage preparation, but then we don’t follow them after they’re married. Everybody was kind of agreeing with that.”

Cardinal DiNardo: “We do pretty well in marriage preparation, but then we don’t follow them after they’re married.”

And there is good reason to follow new families after marriage. Unlike their parents’ generation, young couples today do not live in multigenerational households, and some move far away from their own parents for career reasons. New families may feel overwhelmed, particularly in the United States, where only 14 percent of civilian workers have paid parental leave. Financial uncertainty, the drawbacks and benefits of a two-income household, day care, and raising a child in a world affected by climate change, political polarization, new ethical and moral questions, and great technological change—these are just some of the issues facing modern families.

The best evidence that God trusts us? Our newborn babies.
Ginny Kubitz Moyer

Taking your children to Mass isn’t always easy but it’s worth it.
Beth Meleski

Couples without children face challenges, too. One often-overlooked group that bears the burden of isolation in parishes across the United States is made up of people who are struggling with infertility, which affects one in six couples. About 11 percent of women of childbearing age struggle with fertility, while others carry the grief of miscarriage, which ends 10 percent to 20 percent of known pregnancies, or stillbirth (1 percent of pregnancies). Many Catholics, however, are more familiar with church ethical teaching on assisted reproductive technology than with resources to turn to for support in these situations.

One solution may be a model with which parents of a generation ago are familiar: weekly childbirth education. Both the church and childbirth education models recognize the importance of community. There are thousands of books, blogs and websites for new parents, but childbirth education allows a group to meet regularly in a spirit of learning, support and empowerment. Women or couples can discuss their feelings of joy, confusion, worry and anticipation openly with others.

While the church recognizes that marriage is momentous and offers or even mandates programs like pre-Cana, it does not offer standard preparation for expectant parents, aside from perhaps a class for parents and godparents before baptism. This shortcoming must be amended, as supporting new families is one of the church’s most urgent tasks in the modern day.

It is time for the church to go beyond pre-Cana and begin to talk about pre-Bethlehem. 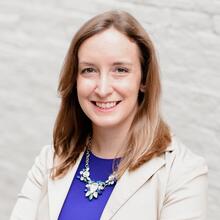 Christina Gebel, of Boston, is a birth doula and childbirth educator. She is the author of the Before Bethlehem curriculum, a parish program to prepare parents for childbirth and beyond.

Women would have to be allowed to speak in the church in order for those with experience about being parents to publicly recognize the needs of expectant parents. Banning women from speaking at the principal liturgy deprives the entire community of some types of wisdom.

The parental "education" I experienced was beyond terrible. I don't understand how an organization run by celibate males who have never lived in a family as an adult could be qualified to advise parents.

Mothers - they are the pillars and the backbone of our Society. May all mothers be blessed with health and happiness.