Taking your children to Mass isn’t always easy but it’s worth it. 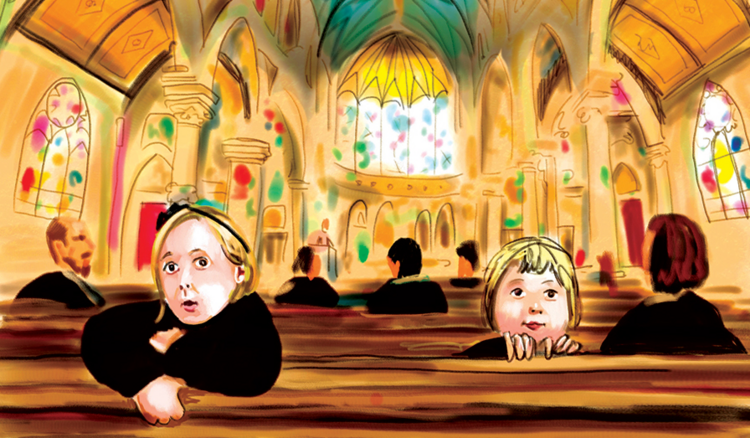 These days, when my family arrives at 9:30 a.m. Sunday Mass (usually fast-walking in just as our celebrant starts up the aisle), my husband and I can be relatively secure in the knowledge that we will make it through the service without incident. This was not always the case, and one Sunday morning, not long ago, those more capricious days were brought back to me.

The woman in front of my family was heavily pregnant with her second child. Her oldest was a lively and curious 2-year-old. The toddler colored quietly through the readings and snacked on impossibly tiny and uniformly cut pieces of fruit through the parable of the barren fig tree. During the collection she found her lovey—an item often given to provide a child with comfort—deep in the recesses of her mother’s purse and settled in for a cuddle. By the time of the consecration, however, she wanted only to tap dance on the pew as we kneeled.

I watched as the mother made a face at her husband. I heard her exasperated whisper, “She’s being so bad today.” I stifled a smile as the little girl scooted out of their reach with a giggle. By the end of the Mass, the 2-year-old was frantic and her mother exhausted. I could relate. Once upon a time, I had two toddlers, just a year apart in age, so the look on that mother’s face and the slump in her shoulders were muscle memory to me.

I was delighted that my youngest child felt comfortable enough in this place to let her hair down. She is not disrespectful, only joyful.

I stopped the mother after Mass as she shrugged into her coat and collected the crayons scattered around her pew. The father already had led the little girl out, anxious for damage control.

She looked at me guardedly, probably steeling herself to be berated or criticized for her daughter’s behavior. “It’s worth it,” I said to her, “Bringing her to church each week. It’s worth it.”

She apologized anyway, “She’s usually so much better. I don’t know what got into her today.” To start with, I thought, she’s 2. She has a 10-minute attention span, but has been asked to remain still and quiet for over an hour. Instead I responded, “She did great.”

As I told the mother to have a good week and turned to find my own brood, my youngest child raced past me on her way to play tag in the grass outside the church with her friends. I made a halfhearted effort to slow her down to a more dignified pace. But in truth, I was delighted that she felt comfortable enough in this place to let her hair down. She is not disrespectful, only joyful.

I watched as my other two, now teenagers, followed more slowly. They caught up with some friends and began talking and laughing just a bit too loudly to be appropriate. Again, I let it go, preferring their casual comfort to a caution that will make them less easy here. These are the children who dropped Goldfish crackers and Cheerios on the floor, who were carted out of the church screaming more times than I could count for reasons too numerous to name. The same children who, as potty-training preschoolers, were hurriedly rushed up the aisle when, invariably, they loudly insisted they had to use the bathroom just as the church plunged into silence.

I have been in the shoes of this mother many Sundays before. My husband and I have pacified with toys and rolled our eyes over their heads and hissed warnings and smiled encouragingly as responses and prayers grew from tentative and unfamiliar to confident and certain.

Over the years, and still today, we choose, time and again, to brave the wrath of children awakened too early on a weekend morning, in order that we might continue to attend Mass as a family. We prioritize religious education over sports, dance rehearsals and social events. We find ways, in our increasingly secular world, to work our faith into our lives; sharing parables and the stories of the saints as bedtime stories and stopping for evening prayers each night, a practice that reconnects us after a long day of going our separate ways. We rely on our “village” to help us set examples in words and deeds.

As I walked out of the church that morning, my phone vibrated. I squinted in the sunlight as I read the text message from a friend: “I just have to tell you how much I enjoyed watching your daughter belting out the responses in Mass today! So sweet!”

That was the payoff. I realized that after so many years and tears—theirs and mine—my husband and I nurtured our children’s faith, helped to make our church feel like home and conveyed that the Mass had meaning. We persevered and powered through, using all the diversions and tactics at our disposal—toys, books, coloring, snacks, threats and bribes.

There are still Masses in which arms remain crossed and frowns never budge. There are Sundays when my husband and I must insert ourselves between feuding children.

And when that failed, we acknowledged our blessed mess and apologized with a rueful laugh to the people worshiping behind us. I have offered doughnuts to these poor souls as compensation and said a prayer that our barren trees would someday flower.

I motioned to my husband on that morning and called the kids. As we headed to the car, my son sauntered up humming the Mass’ closing hymn. Close behind, his sister joined in, softly singing the refrain.

I breathed in the moment as the littlest one grabbed my hand. She said, “Hey Mom, know what? I wasn’t bored in church today.”

“Well, Mass doesn’t seem so long when you know how to join in.”

Not all Sundays are like this. There are still Masses in which arms remain crossed and frowns never budge. There are Sundays when my husband and I must insert ourselves between feuding children. During these mornings I, like the owner of the fig tree, wonder if the fragile buds we are nurturing will continue to bear fruit.

But on that Sunday morning, I wiped away a tear and silently repeated the words I said to that mother: “It’s worth it.”

Beth Meleski is an essayist and stay-at-home mom. She is certain that an actual fig tree would not thrive in her care, but she is immodestly proud of the children she has nurtured. This is her first essay for America.

Show Comments (
3
)
Comments are automatically closed two weeks after an article's initial publication. See our comments policy for more.
J BYRNE
6 years 1 month ago
GIVE US A BREAK Re the essay "Worth a Fig" by a stay-at-home mom 5/9/16, the essayist encourages parents to share their faith with their little ones when they are still very young. Why not take your two-year old to experience Mass on Sunday as they snack on pieces of fruit, giggle and beg to go to the bathroom then tap dance on the pews when they need more attention. Parents look exhausted as they try to control their little ones through the liturgy. This mom doesn't seem to be aware that other parishioners sitting behind are just as exhausted with distractions. While parents should pass on the faith to their children, bringing pre-schoolers to Mass on Sundays is not the way. The distractions are not fair to others who come to celebrate the liturgy. I offer a few options for parents with small children wanting to come to church on Sunday. Use the Cry room. Some parishes offer child care services in another area where small children are read scripture stories. When the child is still very young, the parents may take turns coming to Mass. At least they will have a chance to participate in the liturgy. Anne Byrne
Christina De los Santos
5 years 10 months ago
Pope Francis said “…children cry, they are noisy, they don’t stop moving. But it really irritates me when I see a child crying in church and someone says they must go out. God’s voice is in a child’s tears: they must never be kicked out of church.” I take my children (now ages 8 and 13 months) to mass with my family every Sunday, as we prioritize worshiping AS A FAMILY. My daughter has attended from infancy and is now a bright and attentive young lady who can fully participate in the worship, unlike many of her peer group. Last year she came into full Communion with the Church and during her education leading up to First Communion, she was one of the only children in a 100+ cohort who already knew all of her prayers and was able to identify the process of receiving Eucharist, even though she had never done it herself. After Mass we have always encouraged her to ask any questions, and explained the different parts of the service to her so that she felt comfortable and like she knew how to participate. I do not allow my children to disturb others - yes they are wiggly and interested in seeing what's happening and sometimes they ask questions a little too loudly - but I do take them out if they become overly disruptive. Your lack of welcome of younger parishioners is felt by both their mothers and the children themselves.
Lisa Weber
5 years 10 months ago
I am always glad to see parents with their children at Mass. I know it takes effort to get them ready and to bring them to church. As long as I can hear the homily, the activities of children don't bother me. I know or can read the other Mass parts, so being able to hear them is not so important. The welcome we give to children now will bear fruit when they are older. We need simply to welcome them to the faith.