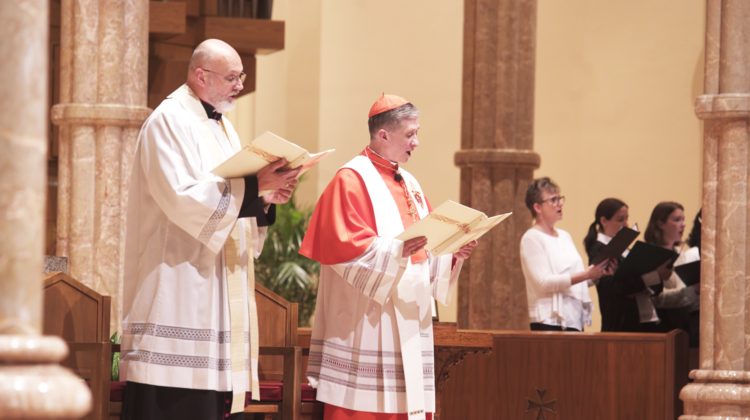 “If you had asked me years ago where I was likely to be on the 500th anniversary...this would not have been my obvious reply.”

The joke, delivered by the Lutheran bishop Wayne N. Miller at a ecumenical service at Holy Name Cathedral in Chicago, drew wide laughter from the crowd, including Cardinal Blase Cupich.

On Oct. 31 Lutherans and Catholics gathered at the cathedral to jointly commemorate the 500th anniversary of the Reformation. According to legend, Martin Luther posted his 95 theses to the doors of All Saints’ Church in Wittenberg, Germany, on this day in 1517. Lutheran and Catholic organizers of the prayer service were careful to describe it as a joint “commemoration” not “celebration.” They felt it would be inappropriate to celebrate the schism and division that the Reformation brought to Christianity.

On Oct. 31 Lutherans and Catholics gathered at the cathedral to jointly commemorate the 500th anniversary of the Reformation.

Cardinal Cupich and Bishop Miller, the head of the Metropolitan Chicago Synod of the Evangelical Lutheran Church in America, led the joint prayer service. They expressed thanksgiving for more than 50 years of official dialogue between their churches, repentance for the sins committed against one another and recommitted to working together toward unity.

The event comes exactly one year after Pope Francis and Bishop Munib Younan, the former Lutheran World Federation president, met in Lund, Sweden. It was the first time that heads of the Catholic and Lutheran churches jointly commemorated the Reformation.

In Chicago, the Reformation event was more like a family reunion than a first encounter. In 1989, Cardinal Joseph Bernardin and Lutheran bishop Sherman G. Hicks signed the first covenant between a Catholic diocese and Lutheran synod.

In Chicago, the Reformation event was more like a family reunion than a first encounter.

Cardinal Cupich and Bishop Miller inherited this covenant, which is a commitment to work toward “complete reconciliation.” The covenant also encourages local parishes to collaborate as much as they can.

Perhaps the clearest sign of that local collaboration is 12 miles north of the cathedral, in Evanston, Ill. On Sunday Oct. 29, representatives from four Catholic and five Lutheran communities gathered for a similar service at Garrett-Evangelical Theological Seminary’s Chapel of the Unnamed Faithful. With numerous clergy and laity present, the Evanston community celebrated their own covenant signing after a year of official joint prayers, conferences, social events and workshops.

For Professor Cristina Traina and the Rev. Bill Hutchinson, the Evanston and Chicago prayer services are visible signs of the work they both want to see from Lutherans and Catholics.

Ms. Traina, a religious studies professor at Northwestern University and a lifelong Catholic, has been married to Rev. Hutchinson, the interim senior pastor at Bethlehem Lutheran Church, for 34 years. They see their cross-denominational marriage as “listening in stereo rather than mono.” 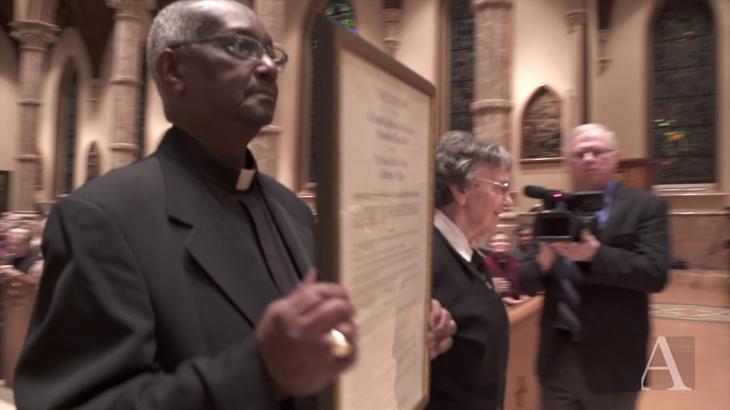 For Ms. Traina, seeing models of female leadership in the Lutheran church has helped her understand her own participation in the Catholic Church. For Rev. Hutchinson, his familiarity with Catholicism helps him to see how Lutherans are rooted in the Western church.

Both have personally experienced the tensions between their traditions, but they consider this commemoration a grace-filled event. Ms. Traina was moved to see Pope Francis acknowledge the role of the Reformation in renewing the Catholic Church at Lund last year. And Rev. Hutchinson was moved to tears thinking of his longtime friend Bishop Miller presiding at Holy Name Cathedral.

“It says there is a theological and ecclesiastical place for Lutherans in the Roman Catholic Church,” Rev. Hutchinson told America.

In spite of these differences, Chicago’s Lutherans and Catholics filled Holy Name Cathedral to pray together.

Not everyone is supportive of such collaboration. At another commemorative event at the Catholic Cathedral of St. Michael and St. Gudula in Brussels this weekend, a group of young Catholic men disrupted the joint prayer service by loudly reciting the rosary. Escorted out by police, the men were portrayed by some websites as upholding the truth of Catholic faith against Protestant heresy.

Outside Holy Name Cathedral, a few protesters held signs that read, “E.L.C.A. is for abortion,” referring to the Evangelical Lutheran Church in America’s official stance of both respecting the dignity of life and opposing legislation that would outlaw abortion in all circumstances.

In spite of these differences, Chicago’s Lutherans and Catholics filled Holy Name Cathedral to pray together. Ecumenical and interreligious guests processed into the cathedral followed by Bishop Sherman G. Hicks. Sister Joan McGuire, O.P., presented the original 1989 covenant. Readings from joint Lutheran-Catholic documents stressed thanksgiving for dialogue and repentance for evil committed against each other. Scripture readings highlighted the role of God’s covenant in Jeremiah, justification by grace in Paul’s Letter to the Romans and the injunction to “love one another as I have loved you” from the Gospel of John.

Cardinal Cupich focused on the work that Lutherans and Catholics must do together to combat the violence and poverty that plague Chicago.

In his remarks, Cardinal Cupich focused on Pope Francis’ metaphor of the church as a field hospital. Together, Catholics and Lutherans can serve the poor as ministers of Christ, he said. Moreover, “the field hospital heals the healers as well.” By taking up the work of healing others, the cardinal suggested that they can heal the wounds of division that still separate Christian communities.

Cardinal Cupich also focused on the work that Lutherans and Catholics must do together to combat the violence and poverty that plague Chicago. United, the city’s Christians “can become the bridge that can span divisions, even those that are 500 years old,” he said.

The service is also personally important for Bishop Miller. With a son who recently married a Catholic woman, Bishop Miller sees the work of Christian unity as a professional and familial vocation.

Since the original covenant was signed, landmark documents like the 1999 Joint Declaration on the Doctrine of Justification have given Catholics and Lutherans the ability to proclaim beliefs held in common. Yet differences over women’s ordination, the ordination of married men and apostolic succession still prevent Lutherans and Catholics from receiving Communion together. The service in Chicago did not culminate in the celebration of the Eucharist. Instead, Bishop Miller and Cardinal Cupich signed the documents and embraced each other to the applause of the crowd.

I am glad to see ecumenical services, but I find it painful to see female Protestant ministers preaching in Catholic churches and cathedrals when Catholic women are barred from preaching.

According to Lutheran bishop Margot Kässmann, former leader of the Evangelical Church in Germany and now serving as a "Reformation Ambassador" , in an interview at the Italian news agency ANSA, reunification between Lutherans and Catholics is unimaginable.
“First : Reunification is not possible for precise dogmatic questions. Secondly, reunification is not desirable because it would inevitably represent flattening. Thirdly, the difference between the Lutheran Church and the Catholic Church is such, and is so intrinsically linked to their own nature, to put them on two completely different levels. On the one hand there is an organization of Christians who has nothing to say about salvation, because it thinks the issue is of exclusive relevance to the individual and his relationship with God. On the other hand, there is a Church that considers assumes itself a necessary mediator between the creature and the Creator.”