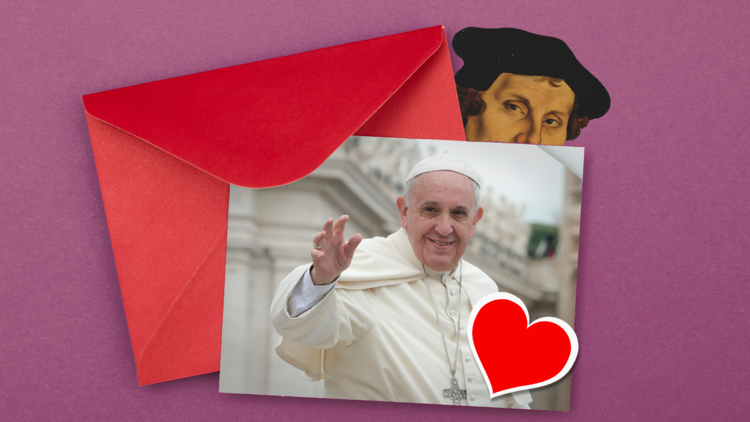 Maybe you have heard: 2017 is a big year for Lutherans. Many are giddy with excitement as we commemorate the audacity of a certain 16th-century Augustinian monk, who on Oct. 31, 1517, nailed his 95 theses to a church door in Wittenberg. Fingers flutter across keyboards feverishly extolling or disputing Martin Luther’s contributions and flaws. But I—one who has marinated in American Lutheranism most of her life—find myself writing to you, the leader of the Roman Catholic Church.

Perhaps it is an odd moment for Lutheran fan mail. Yet, ever since you became the Bishop of Rome in 2013, I have become increasingly convinced that you are the pope that Luther was looking for 500 years ago. Here are four reasons why.

1. You help us to see Christ in our neighbor.

Luther continually emphasized “neighbor love” as a crucial way to love Christ and to respond to a hurting world. He identified the neighbor as the one suffering, whoever that may be. He railed against the neglect of the poor and hungry. He called for the creation of a community welfare chest. He abhorred the practices of usury and the selling of indulgences.

Luther emphasized “neighbor love” as a crucial way to love Christ and to respond to a hurting world.

You once said: “How I would like a church that is poor and for the poor!”—and you have given the world countless examples of what such a church looks like. Your first pastoral trip as pope outside of Rome was to visit migrants fleeing poverty and violence. You have washed the feet of Muslims, of women, of prisoners. You installed bathrooms and showers at the Vatican for those living on the streets of Rome. After your historic 2015 address to a joint session of the U.S. Congress, you had lunch not with Washington elites but with people living in a homeless shelter.

2. You help us to see God in creation.

Luther was in love with life in its varied and dazzling forms—its life-giving waters, its creatures and landscapes. He continuously referenced creation and everyday life in his writings. He relished sharing food, drink and conversation—connecting this kind of communing with the sacrament. In short, Luther saw the divine present “in, with and under” all creation.

You chose the name of St. Francis of Assisi, a lover of the earth and all of its creatures. Your first encyclical, “Laudato Si’,” lays bare how climate change exacerbates every other social ill and the cruel irony that those who contribute the least to the degradation of our common home are paying the highest price for it. It asks us to confront not only harsh planetary realities but also the parts of ourselves that we would rather not see—selfishness, complacency and willful ignorance.

You chose the name of St. Francis of Assisi, a lover of the earth and all of its creatures.

But “Laudato Si’” also expresses profound hope. You write, “For all our limitations, gestures of generosity, solidarity and care cannot but well up within us, since we were made for love” (No. 58). The heart of the Christian story centers upon a prophetic claim to new life. This resurrection is not merely about saving souls but about practicing acts that restore and renew life here and now. It means unfreezing our hearts and turning them outward to authentic love of self, neighbor, planet and God.

3. You combine humility with audacity.

Luther charged the church of Pope Leo X as being “puffed up” with opulent pride and avarice. It infuriated him to see anointed clerics abusing the trust, financial resources, faith and fears of their flock. He deeply wanted Christians, ordained and lay, to understand that we are paradoxically free in Christ and yet called to be “servants of all.”

Your witness on the world stage has been one of great humility—starting with the decision to live in the simple papal apartment instead of the apostolic palace. You are not afraid to apologize. You understand Luther’s insight that we are paradoxically both saint and sinner—that every person is always both beloved and broken, capable of expressing grace and healing and yet always in need of healing and forgiveness.

Your witness on the world stage has been one of great humility.

At the same time, you are a rockstar. You have been on the cover of Rolling Stone and have been named Time’s “Person of the Year.” Like Luther, you have risen to international prominence in a visual culture and astutely employ its technologies. Luther used the Facebook and Snapchat of his day: woodcuts, the printing press, public displays of treatises. Through unscripted interviews and press conferences, Twitter and TED Talks, you use your elevated position to focus our attention on issues we often wish to avoid: obscene inequality, chronic hunger, human rights abuses, the ravages of war.

4. You inspire creative hope and action.

Luther did not set out to break from the Roman church, but his fiery rhetoric and daring example ignited a movement and renewal of faith that he could not fully anticipate or contain. His translation of the Bible into German opened its pages to the general public for the first time and his hymns helped them participate more fully in the liturgy. His humor and passion drew people into bold action and creative community.

To mark the Reformation, Catholics and Lutherans are focusing on what unites them: justice and peace.
David J. Michael

You also inspire millions across the planet. In word and deed, you make it abundantly clear that everyone has something to contribute. Together, there is much that all of us—scientists, religious leaders, business executives, artists, engineers, teachers, entrepreneurs, lawyers, theologians, politicians—can do. Now is our moment to be, as Luther might put it, “the priesthood of all believers” (and, I would add, nonbelievers).

You inspire me, Pope Francis. You help me find the grit to live with intention. So I boldly close this love letter with a fervent request: that you pray for the United States and the world in these tumultuous and confounding times, that we will stumble our way through with minimal injury to ourselves and to others. I ask you to pray without ceasing that humanity wakes up to creation’s myriad cries in time to do something meaningful about them.

God bless you, Holy Father. Know that I pray with and for you. 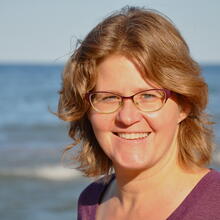 Thank you for a brilliant, on-point letter that expresses not only love for Francis but love for humanity. For humanity to survive we must recognize, honor and heed moral leadership provided by traditions other than our own. This is a wonderful example of how to do just that.

Thanks very much for this articulate overview of the theological and ethical values we Roman Catholics and Lutherans share. As a Lutheran who has taught in such Catholic institutions as the University of St. Thomas (MN) and Fordham (NYC), I have been enlightened by the social teaching legacy of several previous popes and inspired anew by the lifestyle choices and public proclamation of Pope Francis.
Carol Schersten LaHurd

Thanks for shining the light on this important milestone for our Lutheran sisters and brothers and pointing us to the ways we are united by our mutual love of Pope Francis and his message of charity, mercy, and hope.

Thank you, Professor Vigen, for this thoughtful, enlightening letter. As a Lutheran, I share your love and admiration for Pope Francis. His humble and bold leadership is an inspiration for all faiths--and for those with no faith at all. He is the epitome of grace and compassion, which the world needs more than ever. I pray for the Holy Father and all who lead and speak on behalf of humanity. For we are all constantly "Reforming" our church and faith communities. We must raise our voices, work for peace and serve our neighbor, following the example of Jesus, and of Pope Francis.

Sorry, but this is so over the top, and indicative of the Francis hagiography that America publishes on a steady basis.

I don't quite recognise the Luther presented here.
He did have nasty things to say about Jews, Zwingli and others
who did not strictly follow the reforms Luther desired, and
the peasants who rebelled against the authorities that Luther
relied upon for his freedom and monetary support.

It is not true that Luther's translation of the Bible suddenly made
it possible for the laity to read the Bible. Most of those who could
read German at that time, who could afford to buy a Bible, also
knew Latin.

As for where Francis lives, it is not as if Benedict lived in splendour,
his room was simple, the building was ornate. It is probably a better
living space for Francis being in a far more modern building.