Pope Francis: The church needs young people so that “no one should be rejected” 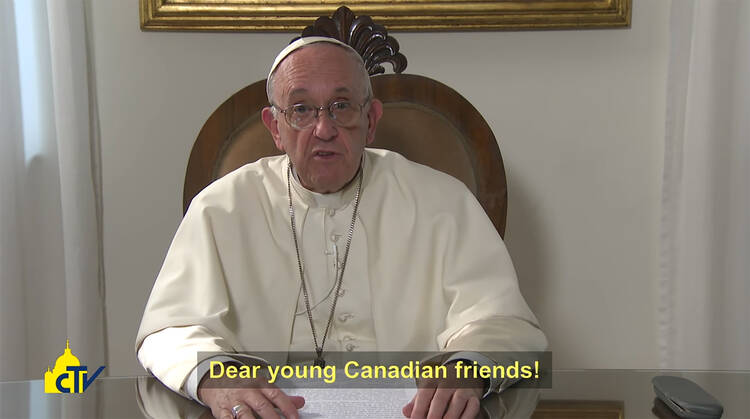 Pope Francis speaks from the Vatican as he addresses Canadian youths in a video message that was included in a Salt and Light Television program on Oct. 22 (CNS photo/courtesy Holy See Press Office).

Pope Francis urged young adults in Canada “not to let the world be ruined by those without scruples, who only think about exploiting it and destroying it.” Instead, he said they should “flood the places where you live with the joy and enthusiasm typical of your youthful age, to irrigate the world and history with the joy that comes from the Gospel, from having met a person: Jesus, who has enthralled you and has drawn you to be with Him.”

The pope delivered the message in a video shown to young Canadians gathered in multiple cities for a town hall style event with Cardinal Kevin Farrell, head of the Vatican’s family and laity office, ahead of a 2018 Vatican meeting on young adults and the church. The event was held earlier this month and a televised version of it premiered Sunday night on Salt + Light Television, a Catholic station based in Toronto.

“The world, the church, are in need of courageous young people, who are not cowed in the face of difficulties, who face their trials and keep their eyes and hearts open to reality, so that no one should be rejected or subjected to injustice or to violence, or deprived...of human dignity,” he continued.

Francis urged young adults to continue fostering a relationship with Jesus through prayer.

“Let Him speak to you, embrace you, console you, heal your wounds, dissolve your doubts and fears—and you shall be ready for the fascinating adventure of life, that precious and inestimable gift that God places every day in your hands,” the pope said.

He acknowledged the challenges young people face today, a frequent theme in his speeches.

“I'm sure your heart—a young heart—will not be closed to the cry for help of so many of your peers who seek freedom, work, study, a chance to make sense of their lives,” he said. “I count on your willingness, your commitment, your ability to face important challenges and dare to make the future, to take decisive steps along the path of change.”

“I'm sure your heart—a young heart—will not be closed to the cry for help of so many of your peers who seek freedom, work, study.”

During the event, Cardinal Farrell echoed the pope’s message.

“The Holy Father wants us to change the world,” the former bishop of Dallas, Tex., said. “Make a difference. Don’t let the world control you; don’t let it drag you down. But you tell us how we can help you to improve it and to make it better.”

Bishops from around the world will gather in Rome next October for a three-week long assembly, which Pope Francis decided would focus on the needs of young people in the church.

Can the Catholic Church keep millennials from passing it by?
Zac Davis

According to the Vatican, the goal of the meeting is “to accompany the young on their existential journey to maturity so that, through a process of discernment, they discover their plan for life and realize it with joy, opening up to the encounter with God and with human beings, and actively participating in the edification of the Church and of society.”

In January, Pope Francis wrote a letter to young people about the goals of the synod, and in April, he said during a speech at the Vatican that he wants to hear the voices of all young adults, including Catholics as well as atheists, agnostics and those estranged from the church.

Why doesn't this narcissist for a pope just complete his trajectory. How about appealing to Satan worshipers and be done with it. Then he'll have a lot more people he can call rigid for resisting.

I think it will make more scriptural, religious, faith and theological sense if we respond to the Pope's point with some depth devoid of abuse and insult. Pope Francis has a pastoral point, and I agree with his pastoral point and pastoral appeal to the youths on this matter. I am a Christian and a Catholic. Based on the facts on ground, and what we see in our society and world today Pope Francis' point is sound scripturally and theologically. But given the way trolls have invaded readers' columns of respectable papers, pretending to engage in "serious" discussion while passing insults on people who maintain opinions different from theirs, and given the way Facebook Russian sponsored trolls were deployed and used to intervene and affect the 2016 American elections, I am generally not inclined to debate serious issues of faith like this on the pages of newspapers. Why? One does not know if the person one is purportedly debating is real and not some troll. However, Christians and Catholics who take their faith seriously will see Pope Francis' point and work as missionary disciples among God's people to ask Christ to teach them, inspire them and energize them to bring God's children back to him and to stop the division that presently plagues the world today courtesy of the bigotry and xenophobia that are currently reigning in the minds of some people. Christ teaches us and gives us a Command in John 17:21. Pope Francis' pastoral appeal is coming straight from John 17: 21. Christians and Catholics who take their faith seriously must base their position on the Bible as Pope Francis has done and is doing. So my question is: what do we think of John 17: 21 in the light of Pope Francis' pastoral appeal to the youths? Let us base our responses on the scriptures.

Thank you for your thoughtful response Adeolu. I wonder how James would have responded when Christ refused to condemn the prostitute and ate with tax collectors.

Why do the young need a different message than those of previous generations? What has changed? Certainly life in the world has gotten easier not harder. (some obvious exceptions.)

I can speculate on why the young are not accepting religion let alone Catholicism but for any message to resonate it must be based in truth, not currently fashionable appeals which will change in a few years. What is missing is the fundamental reason to be religious which is timeless. Not vague platitudes.

Can you please state your views clearly? Your post is somehow ambiguous i.e not clear enough. Each person should state where they stand on issues, so that responders know what to respond to. And some of us who are Catholic and Christian and who take our faith seriously will like to engage real debate with real persons. So kindly state very clearly your position. This way there will be critical engagement of issues and positions. So to make the issues more lucid, I will like to ask you two questions which seem embedded in your post. (i) Are you affirming religion and suggesting that we do not need to change the message as your first paragraph suggests? Or (ii) Are you de-affirming religion as your second paragraph suggests? If you want us to engage the first question, then we can engage in some productive, helpful and proactive conversation on how best to carry our God's work among his people. But, if your point is the second one, please count out some of us who take our religion, Catholicism, Catholic faith and its truth seriously. I will defend your right to hold your opinion, any opinion including denying religion and de-affirming it. As a human being, it is your right to think anything you want to think for you have an agency. No one can and should have a right to stop anyone from thinking. But Catholics who take their faith seriously and who live among God's people and doing God's work will rather spend such limited time continuing God's work among his people. Why? There are just 24 hours in a day. And every second is precious in carrying out God's work among his people. No time can and should be wasted. We will rather focus on carrying out God's work among his people. So what exactly is your position?

First, people rarely ask for a reply and dialogue on this site is almost non-existent. It is more a shouting down of other's opinions. I do not mind disagreement but there is rarely an honest attempt to see another's point of view.

Second, my first comment is very clear. There is no need for a change in message by the Church and certainly no one is being left out. So what is the purpose of the article? There is a constant theme on the America site that people are being rejected when I doubt that is so.

The purpose of Catholicism is to attain salvation. As times change, the way the message is communicated may need to change but the basic message should remain the same. This is rarely mentioned on this site. It seems the Pope and the Jesuits are only interested in creating a heaven on earth and salvation is passé. Read the article, the Pope says zero about salvation but just emphasizes making this life more meaningful.

Third, my second paragraph just re-emphasizes what I said in my first paragraph. There is a fundamental reason to be religious and that is salvation. Salvation is timeless and must be the message whether it is the beginning of time or a million years from now. There is no other message or reason to be religious. Now as I said above, how one communicates that can change but the basic message should always be the same. Also once a person accepts that the purpose of life is not this life but the next life, what one does with this life becomes an important issue. But it is always subordinate to the real purpose of life and not the main objective.

The problem with the young is that most no longer believe in a God with a plan for a life after this. Their only cares are for this life and the Pope is seconding the direction they are taking.