Vatican’s family chief: Youth must be heard ahead of Rome summit 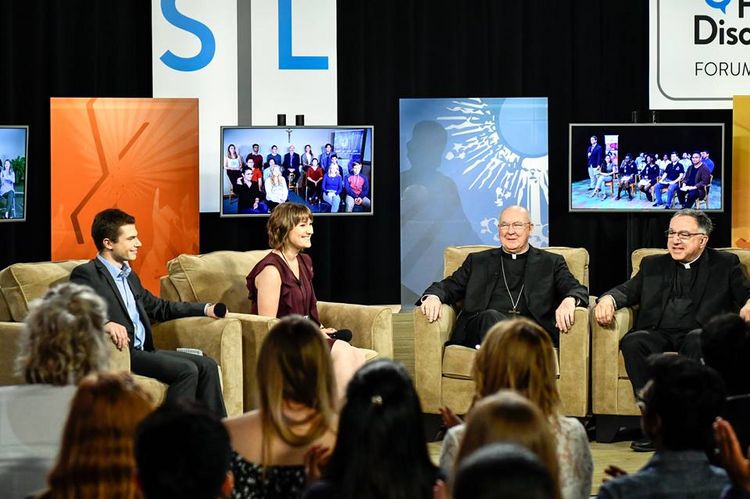 Young adults gathered in the Toronto studios of Salt + Light Catholic Media this week for a town hall meeting about the church. The event was hosted by Julian Paparella, left, Emilie Callan, Cardinal Kevin Farrell and the Rev. Thomas Rosica. (Courtesy: Salt + Light)

As the Vatican continues preparations for a global meeting of bishops next year to consider the needs of young Catholics, the cardinal in charge of Rome’s family office wants them to know that they must make their voices heard.

“It’s your moment; it’s your time,” said Cardinal Kevin Farrell, head of the Vatican’s office for laity, family and life. “The whole church is saying to you, the pope is saying to you: Don’t allow the world to control you; you control the world.”

The cardinal, who served as the bishop of Dallas, Tex., until his appointment to Rome last September, spoke at an event hosted on Oct. 10 in Toronto by Salt + Light Catholic Media. The event, which includes a special message from Pope Francis, connected groups of young adults gathered in six Canadian cities to ask questions and express themselves ahead of the 2018 synod. It will be broadcast in Canada and available online on Oct. 22.

“The Holy Father wants us to change the world,” Cardinal Farrell said. “Make a difference. Don’t let the world control you; don’t let it drag you down. But you tell us how we can help you to improve it and to make it better.”

Of concern to the young people who spoke was how the church could do a better job evangelizing and how to resist despair. One participant highlighted suicide among young people as a major problem in Quebec. Largely absent from the questions were issues related to sexuality.

“Don’t let the world control you; don’t let it drag you down. But you tell us how we can help you to improve it and to make it better.”

“I’m aware of the situation of youth suicide that is related very much to despair, a culture without hope, a culture that has allowed itself to be overtaken by war and by violence,” the Rev. Thomas Rosica, head of the television network and one of the event’s co-hosts, said in reply. “There’s a lot of bad things in happening in the world. We can’t allow those things to overtake us and prevent us from acting.”

When it comes to evangelizing, Cardinal Farrell said young people themselves should consider how they can reach out to their peers, holding up social media as an area where they would be more effective than what he called “the elders” of the church.

“If Saint Paul were around today, where would he be? He’d be an expert on [Twitter’s] 140 characters. And that’s where you should be,” he said.

Bishops from around the world will gather in Rome next October for a three-week long assembly, which Pope Francis decided would focus on the needs of young people in the church. According to the Vatican, the goal of the meeting is “to accompany the young on their existential journey to maturity so that, through a process of discernment, they discover their plan for life and realize it with joy, opening up to the encounter with God and with human beings, and actively participating in the edification of the Church and of society.”

In January, Pope Francis wrote a letter to young people about the goals of the synod, and in April, he said during a speech at the Vatican that he wants to hear the voices of all young adults, including Catholics as well as atheists, agnostics and those estranged from the church.

Earlier this summer, the Vatican announced an online survey for young adults to submit their thoughts before the bishops’ meeting, and more recently, it announced that it would hold a special conference of young adults in Rome next March. Their findings will be collected and given to bishops ahead of the October gathering. U.S. bishops will discuss their plans for the youth synod during their fall assembly next month.

Cardinal Farrell said in Toronto that the bishops’ October 2018 gathering will be an extension of the synods in 2014 and 2015. During those meetings, bishops tackled the difficulties of modern family life. Those discussions led to the publication of “Amoris Laetitia,” a papal exhortation that urges priests and ministers to reflect on how they provide pastoral care to families. That document set off fierce debate in the church, primarily due to a section that some bishops say creates a pathway to Communion for divorced and remarried Catholics.

Responding to a question about the ability of church leaders to respond to young Catholics who feel hurt by or alienated from the church, Cardinal Farrell said all Catholics must strive to live out the Gospel.

“How do we help them? By being supportive, not by rejecting them or by judging them for what they have done in the past,” he said.

“The world today is not like it was 50 years ago,” he continued. “It’s a different world and we need to recognize that.”