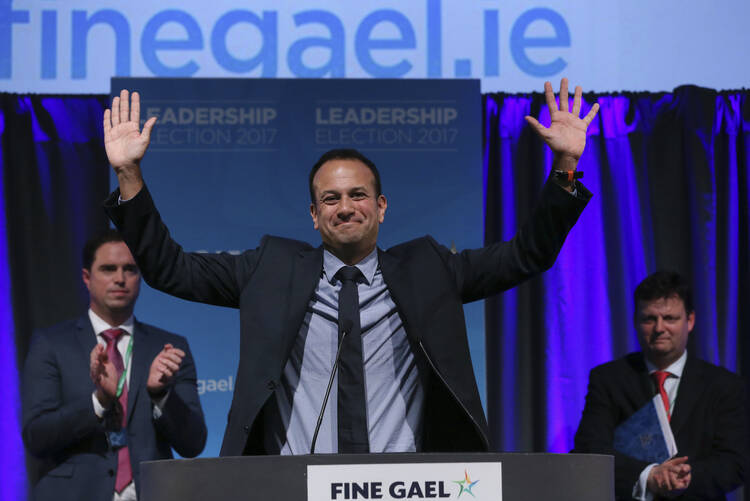 Leo Varadkar celebrates as he is named as Ireland's next prime minister, in the Mansion House in Dublin, Friday, June 2, 2017. (Brian Lawless/PA via AP)

Ireland’s new Prime Minister Leo Varadkar has had little time to dwell on the historic nature of his elevation to high office. As he began his first full week as Ireland’s youngest-ever leader, he visited the United Kingdom’s Prime Minister Theresa May in Downing Street to discuss the discord that, geographically at least, surrounds our small nation: Brexit. Prime Minister May’s disastrous showing in the snap election, which she herself called, has further blurred the British position in the European divorce proceedings and forced her into a controversial deal with Northern Ireland’s Democratic Unionist Party, who are themselves in negotiation with nationalist party Sinn Féin in Northern Ireland to get a deadlocked government up and running. It is enough to make Irish political landscape appear almost serene—almost.

The international press lauded the election of an openly gay son of an Indian immigrant as a sign of how progressive our tiny little island had become.

As he navigates the early days of his leadership, Mr. Varadkar has positioned himself as a leader of “the new European center” and “a republic of opportunity.” He has benefitted from the positive coverage his election generated in the international press, who lauded the election of an openly gay son of an Indian immigrant as a sign of how progressive our tiny little island had become. The New York Times wrote that his rise is evidence that Ireland is rapidly “leaving its conservative Roman Catholic social traditions behind.”

But in the Irish coverage, the “gay son of Indian immigrant” tag was almost a footnote. Perhaps that is because Mr. Varadkar is a familiar public face, a media-savvy performer whose rise over the past decade has put him in the small category of Irish politicians recognized by their first name only.

His election was not widely hailed as a move toward a new liberal Ireland.

But more significant, his election was not widely hailed as a move toward a new liberal Ireland. Though Mr. Varadkar’s views on contentious issues have softened, he is still among the more conservative members of the Irish parliament. The leadership contest that preceded his election was defined by Mr. Varadkar’s own declaration that he wanted to be a leader for “people who get up early in the morning.” He later clarified that he was describing “a country that rewards work, that rewards people who work hard, that want better lives for themselves, their families, their communities,” but the implied logic was that he had little concern for those who do not get up early or could not get up at all.

Mr. Varadkar’s challenger, the housing minister Simon Coveney, latched onto the phrase and framed the election as a contest for the “soul of Fine Gael.” But in the end, “the soul” was won over by Mr. Varadkar, who was lauded by his parliamentary party colleagues as someone who could inspire the next generation of Fine Gael. In his acceptance speech, Mr. Varadkar framed his victory as an unlikely success story. “I hope any child growing up looks at me and my unlikely story and my background and believes there is no office in this State that they cannot aspire to, nothing you cannot do if they believe in themselves,” he said.

His election was defined by Mr. Varadkar’s declaration that he wanted to be a leader for “people who get up early in the morning.”

As the veteran journalist Olivia O’Leary put it, many of the things that make Mr. Varadkar so attractive to Irish millennials “reflect a generation inspired by American values, who admire individual effort above all. They like that Leo is not part of a dynasty, like so many other TD’s [members of the Dail]. He is, politically at least, a self-made man.... My generation who grew up in the sixties believed in the collective. We believed in unions, in feminist sisterhoods, in marching together against wars and apartheid.”

But the shift Mr. Varadkar represents is not just a focus on individualism. Former Prime Minister Enda Kenny was known for being evasive and closed off and for his ability to talk around parliament’s questions without giving a clear answer. Leo Varadkar, meanwhile, positioned himself as a straight talker willing to take a contrarian view on contentious issues. And despite the fact that Mr. Varadkar did not bring sweeping changes to the cabinet, when he chaired his first meeting as Taoiseach at Áras An Uachtaráin last Wednesday, it was undoubtedly seen as the changing of the guard from one generation to the next.

But with this new era come old stubborn problems: the housing crisis; inadequate public health care; legacy issues within policing. Add into the mix a referendum on abortion planned for next year and our neighbors leaving the European Union, and you have a very interesting first year for Mr. Varadkar.

Of course, there will be plenty to look forward to as well. Enda Kenny had said he planned to stay on as prime minister to meet Pope Francis when he visits Ireland in August 2018, but a series of political missteps made his early exit inevitable. Barring another political upheaval, Pope Francis and Prime Minister Leo Varadkar will meet instead, two men who reflect the changes that time has brought to both Ireland and the church.

The notion of a 'liberal hero' is an interesting one in itself. Certainly with the modern connotation of 'liberal', one might argue it's a contradiciton in terms. There's nothing heroic about modern 'liberalism'.

There's nothing wrong with having a homosexual PM--we've had them here in Britain--but there is a problem with pretending that homosexual behaviour is 'normal' rather than a manifestation of an underlying psychological disorder. And there's something very wrong when a society permits the absurdity of 'homosexual marriage', which can only lead to its undoing. Much as we abhor the Islamic-inspired violence that has afflicted these islands, it's hard not to feel sympathy with these young extremists who are reacting to a visceral disgust at the decadent society around them.

And now the anti-Catholic element in Ireland is pushing to overturn the constitutional ban on abortion--a ban that was wisely put in place when still-Catholic Ireland saw the holocaust of abortion spreading through other countries. One might wonder why those who push the gay agenda are also so pro-abortion--what's the link? After all, homosexual men don't need to worry about unexpected pregnancies.

Secular apologists would claim the link is personal freedom: the freedom to have sex with any sex/species/number of partners one chooses, the freedom to 'do with one's body' what one chooses. But the real link is that both are based on lies: the lie that homosexual behaviour can be 'healthy', the lie that a foetus is not a human being.

I first went to Ireland in 1982 (4 months) and most recently (Cork) last week. It's sad to see the toll materialism and material wealth has taken on the soul of the country. The country, once pious and poor, now seems dependent on foreign labour--every waiter/ress we met seemed to hail from Poland or further afield. A parasitic relationship with the EU has made Ireland fat, lazy and corrupt. The political machine continues to be dominated by 2 parties whose raison d'etre (the treaty and civil war) has long been ireelevant. And the post-Vatican II hierarchical church is incapable of providing moral leadership.